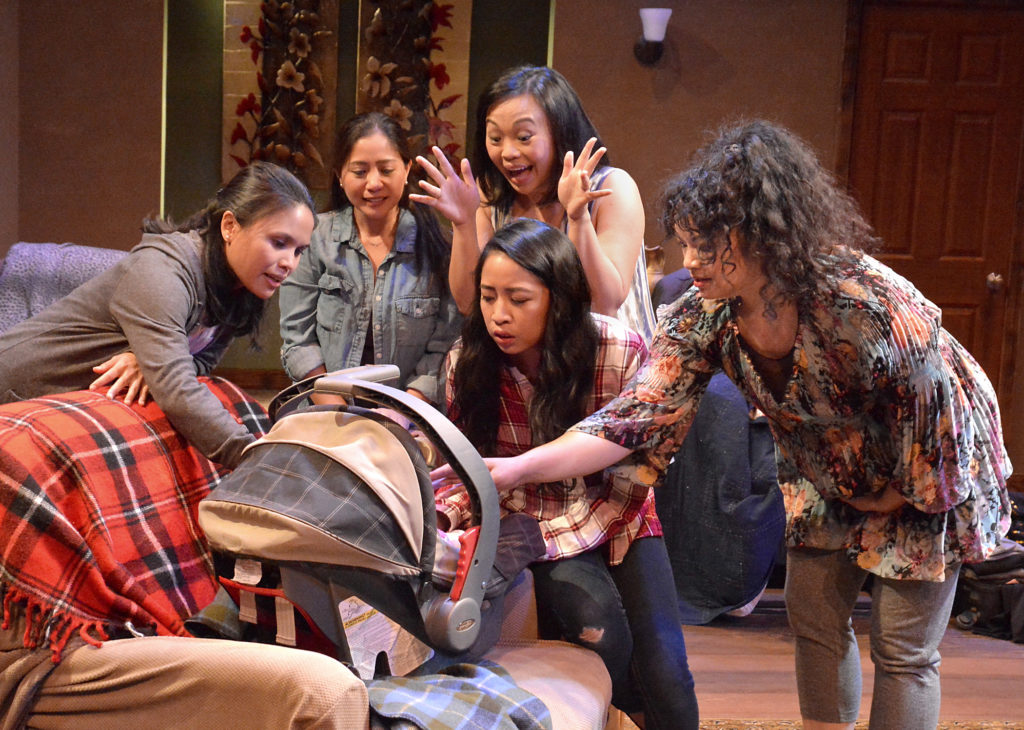 Birth tourism in the United States is a flourishing business. Each year thousands of women from foreign nations pay big bucks to birth their babies on U.S. soil, insuring that their children (courtesy of our Fourteenth Amendment) will become U.S. citizens. The women’s travel and stays are often facilitated by illegal for-profit intermediaries that promote their services in their clients’ local newspapers. The very wealthy pay for royal treatment and get it. Those with fewer means (none are poor) may instead find themselves housed with other expectant mothers in cramped apartments, their comings and goings monitored and restricted.

In America Adjacent, directed by Jon Lawrence Rivera at the Skylight Theatre, Filipino-American playwright Boni B. Alvarez dramatizes the experience of six such Filipinas temporarily inhabiting a one-bedroom flat adjacent to Los Angeles’ well-to-do Hancock Park neighborhood. Overseen by a curt and condescending administrator (Hazel Lozano), they bicker away their days while waiting to go into labor. Those who have already given birth linger onsite just long enough for their child’s documentation to arrive before they fly back home. Each has her own story. Roshelyn (Angela T. Baesa), more emotionally mature than the others, is a teacher of English. Paz (Toni Katano) is a socialite with attitude. Aimee (Sandy Velasco) is marked by her sunny disposition and an unusual blend of heated carnality and religious devotion. Divina (Arianne Villareal), the victim of her uncle’s sexual abuse, is resentful, deeply confused and defensive; when the others protest the wrong done to her, she’s still singing her predator’s praises.

Most of the narrative is driven by events surrounding Janelle May (Evie Abat) and Sampaguita (Samantha Valdellon). The mistress of a wealthy married man, Janelle May, suffering a postpartum disorientation, wants little to do with her new baby; breaking house rules, she sneaks out to rendezvous with a Mexican-American man that she fancies will be part of her future. Like Janelle, Sampaguita, young and recently arrived, refuses to stay inside but instead takes clandestine strolls through Hollywood to soak up the sights. It is primarily through her eyes that the women’s disappointment is chronicled and the playwright’s message — the thorny paradox that is the American Dream and its impact on people’s lives — is sounded.

Part of the playwright’s intent is to raise our awareness of the Filipino community and give it visibility on the American stage. And in our observation of his characters, their likes and dislikes, their dreams for the future and their strong Catholic faith, he succeeds.

But while America Adjacent may be on track as a group portrait and cultural beacon, it misses the mark as a cogent drama. Some of the story threads are under-developed, even as the more prominent ones are too steeped in melodrama. The interaction among the characters often consists of petty squabbling (degenerating at one point into hair-pulling) and other scenes come across as too obviously aimed at our edification, while at the same time failing to propel the narrative forward (Paz refuses to eat a traditionally American birthday cake because it’s unlike the ones she’s accustomed to).

Some of these shortcomings might have been camouflaged with strong performances. Instead, they’re compounded by an uneven ensemble. Lozano (smartly outfitted by costumer Mylette Nora) is effective as the brisk, uncaring administrator, while Baesa depicts the household’s most sensible, nurturing member with surety and warmth. But Valdellon, though she has affecting moments, is often over the top. And Abat delivers a blueprint of the jaded Janelle rather than the rounded portrayal that might have us feel her pain.