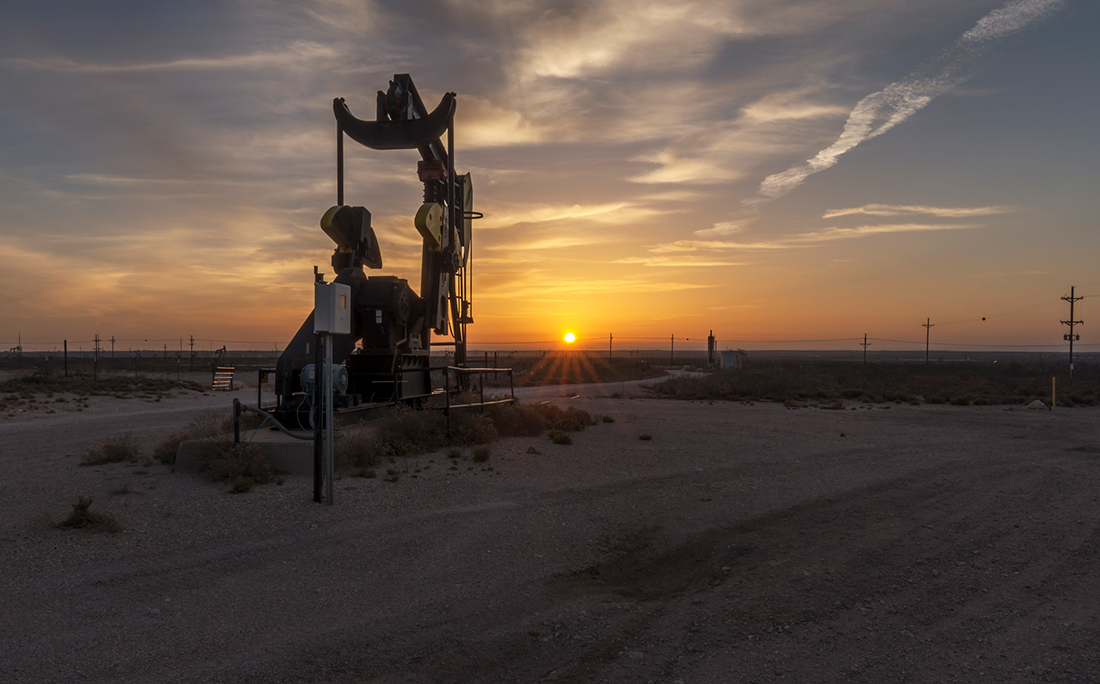 Later this month, New Mexico lawmakers will have another chance to fix an economic problem that has plagued the state for decades.

“For at least 40 years people in the state government and the Legislature have known that they are overly dependent on oil and gas for state revenue,” says Jim Peach, regents professor of economics at New Mexico State University.

Right now, more than 40% of the state’s income relies on the boom-and-bust fortunes of oil and gas. Now, according to a trio of New Mexico’s leading economists, the time has come to change course.

“Like it or not, we’re at the tail end of the fossil fuel age,” Peach says. “We really are.”

The industry itself was already rethinking its future when COVID-19 wreaked havoc with oilfield jobs and revenues. The biggest oil and gas companies in the world — some of which have huge holdings here in New Mexico — are protecting themselves against impending changes in the marketplace by diversifying their portfolios and investing in wind and solar. BP is investing in electric charging stations in China, for example, and Shell is selling its refineries as it works to become carbon neutral by 2050. “They can see the handwriting on the wall,” Peach says.

“Like it or not, we’re at the tail end of the fossil fuel age.”

Worldwide, economies are ever-more-rapidly turning from fossil fuels to renewables, as green technologies become cheaper and the consequences of climate change more dire.

That change is stark as New Mexico faces yet another season of extreme drought, decreasing water resources and heightened risk of wildfires. And what gets drilled out of the ground and taxed here exacerbates these problems.

And if New Mexicans are to weather these changes, too, the state government needs to change where it gets its money — and break its resource curse.

The phenomenon known as the resource curse occurs when a country has an abundance of natural resources, yet underperforms economically and socially.

New Mexico isn’t the only place where a boom-and-bust economy hinders progress on education and social welfare. It shares this misfortune with countries like Nigeria, Angola and Venezuela.

The problem is known internationally by a few different names: the paradox of plenty, or the Dutch disease, or more commonly, the resource curse. It hits when a country has an abundance of developed natural resources — yet underperforms economically and socially.

The influx of cash and capital from one industry bends the economy, and government warps and loses initiative as politicians avoid annoying the goose that lays golden eggs.

Two more things New Mexico has in common with Nigeria, Angola and Venezuela? Exxon and Chevron, two of the state’s largest well operators.

Peach started studying the resource curse in the United States after noticing how places like West Virginia and Oklahoma had huge coal and oil industries yet remained mired in poverty. In New Mexico he saw that oil and gas pumped money and jobs into just two or three counties, and the rest of the state saw few benefits beyond taxes redistributed through the state budget.

That bottleneck makes state politics contentious when it comes to spending.

“People in the oil and gas industry are not exactly happy about the fact that they provide so much of the state budget, and from their perspective get so little in return,” Peach says.

He points out, though, that the money comes from selling resources that belong to everyone in the state, not to the industry.

Every drop of water used to drill an oil well, every unit of natural gas, every chunk of land carved up for wells and roads belongs — directly or indirectly — to New Mexicans. Yet, while industry exports those resources and earns profits for their shareholders, New Mexicans are left with desiccated lands, polluted waters and uneven investments in schools and futures.

At a Legislative Finance Committee meeting in early December, the state’s economists said that revenues for fiscal year 2021 will be $850 million lower than in 2020. Seventy percent of that drop is from reduced oil and gas income brought about by the COVID-19 disaster. The economists did say that much of that gap can be filled from the state’s rainy day fund — the Tax Stabilization Reserve — which is filled by oil and gas taxes.

Clearly, revamping the economy won’t be an easy task.

Another difficulty is a deep resistance to economic development, Peach explains.

It threatens bankers and politicians — the people with money to fund development. Bankers don’t like lending to untested businesses, Peach says, and they don’t want to support anything that might undermine the profitability of what they already fund.

Politicians also tend to fear offending current tax-paying industries, or raising taxes — for anything. “Nobody in the Legislature wants to go back to their constituents and say, ‘I helped raise taxes,’” Peach says.

But taxes fund large-scale education and infrastructure development — the basic investments that pay out in timeframes longer than any political career.

“Short-term thinking does not lend itself to the big sort of infrastructure investments that the state needs,” says James Jimenez, the executive director of New Mexico Voices for Children.

“All the tax breaks in the world for business aren’t going to make a difference if people don’t have money to spend.”

Improving education, health care, basic infrastructure and tax reform will allow New Mexicans to thrive, but those are long-term projects hampered by the state’s reliance on unstable revenue from oil and gas.

“All the tax breaks in the world for business aren’t going to make a difference if people don’t have money to spend,” he says. They get more money to spend by working at better jobs. And they get better jobs through better education, and through businesses attracted to a state with better infrastructure.”

When she came into office, Gov. Michelle Lujan Grisham set forth a spread of initiatives to improve those things. “What the governor did with her policy proposals was a recognition of areas in which New Mexico had been failing our residents,” says Jimenez, who began his career as an economist for the state in 1986 and served as chief of staff to former Gov. Bill Richardson. “You know, they’re not dramatic.” They are basic improvements, he says.

Jimenez says it’s up to the governor and legislative leadership to set a different direction.

“The real value of the governor’s office is the governor’s ability to bring people together around a common direction — to set a direction and say, ‘That. That’s our North Star. That’s where we’re going.’”

“We’re just a small little state,” says state Rep. Angelica Rubio. “That’s why I was so blown away by this resource curse [idea], because nations are dealing with this and we’re not even a nation.”

In her efforts at the Roundhouse to redirect how the state funds itself, she’s received a lukewarm response from other legislators. “How do we make it OK for other legislators to believe the same thing without feeling like they’re going to leave people behind?” she asks.

“We just keep saying we’re going to diversify our economy, but we just don’t lay out the road map.”

Rubio grew up in the Permian Basin, and most of her family works in or adjacent to the oil and gas industry. But she sees the need to move the state away from those jobs.

“I think it’s really hard for people to just come out and say, ‘We need to transition away from oil and gas, and these are the ways we’re going to do it,’” she says.

“We just keep saying we’re going to diversify our economy, but we just don’t lay out the road map.” She compares it to removing a Band-Aid: It’s going to be painful but “you just have to rip it off.”

It’s not just a Democratic issue. State Rep. James Strickler, a conservative Republican representative from the San Juan Basin who deals in oil and gas leases, says, “We absolutely need to diversify. Everybody’s in agreement, I think from both sides of the aisle. But how do you attract those businesses?”

If the state doesn’t figure that question out, it faces even greater shortfalls if the oil and gas industry shrinks further in the future — which appears increasingly likely.

The oilman’s prayer comes in a couple of versions, but it generally goes like this: “Please God, let there be one more oil boom and I promise I won’t piss it all away.” Google it and entries pop up from Alberta to Texas to West Virginia. It was a popular bumper sticker in the ’70s.

The saying reflects what Janie Chermak, professor and graduate director in the Department of Economics at the University of New Mexico calls the “continual roller coaster” as workers — and state economies — chase jobs and dollars as the price of oil rises and sinks. “It’s like Groundhog Day every few years,” she says.

Only Alaska, Wyoming and North Dakota rely more on oil and gas revenues than New Mexico. All three are facing similar budget shortfalls.

Legislators might feel unable — or unwilling — to get themselves off that roller coaster. But you can’t grow an economy centered on a single, volatile industry. Only Alaska, Wyoming and North Dakota rely more on oil and gas revenues than New Mexico. All three are facing similar budget shortfalls.

But one resource-rich state has shown that change can happen toward a more robust, diversified economy.

When Colorado’s shale oil industry went bust in the 1980s, state leaders decided to diversify the economy. “And so if you look at it today, there is a tech industry,” Chermak says. “There is an energy industry. There’s a number of different pieces there, but it didn’t happen overnight.” Colorado also heavily promotes outdoor recreation, which contributed more than $35 billion to that state’s GDP in 2017. By comparison, in 2019 New Mexico’s outdoor recreation industry brought in $2.4 billion.

It takes people with the foresight and the political will to steer the state down a new path, she says, because it’s a challenging path. And it’s hard to fight against an industry that is so big and has so much money.

“You know, the lobbying capabilities of the oil and gas industry are fairly substantial,” Chermak deadpans.

In the 2020 election cycle, oil and gas companies and their proxies spent $1.5 million on local political campaigns and PACs in New Mexico.

Post-election periods like now offer a short-term window when politicians float new ideas before they begin to worry about reelection, Chermak says. It’s not easy to diversify an economy that has relied on one industry for nearly a century. “Diversifying an economy has to be nurtured.

“You know, 10 years, if you came back and I was still living and breathing, I’d hope to God we weren’t going to have the same conversation,” Chermak says. “But you never know.”

For his part, Jimenez is optimistic.

The Southwest’s Race Against the Climate Clock