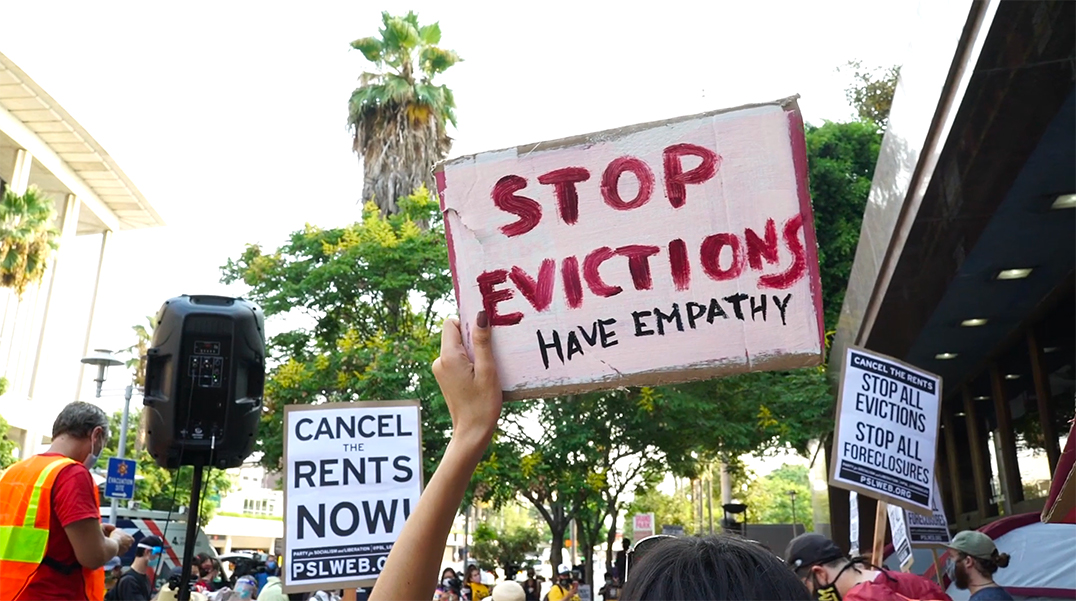 “Cancel rents or people die,” read a sign held by a woman on the steps of the Stanley Mosk Courthouse in downtown Los Angeles.

“Stop all evictions, stop all foreclosures” and “Evictions = Death,” proclaimed others carried by 100 masked protesters who were blocking all public entrances into the polished-granite building where all eviction cases in L.A. County are processed. An elegant mariachi band performed for an agitated crowd of lawyers in business suits, all of them stuck outside, rifling papers where they could.

On that August 21 afternoon, in this tragic year of COVID-19, relief was still several days away in the form of eviction moratoriums from both California and the federal Centers for Disease Control, solutions that housing advocates now call Band-Aids that are at best temporary and inadequate. Without further action, a tsunami of tenants are expected to lose their homes as a result of exploding debt from these many months of unpaid rent.

Without further action, a tsunami of tenants are expected to lose their homes as a result of exploding debt from these many months of unpaid rent.

Without action before 2021, government may be forced to “erect something like refugee camps, on a scale never before seen in the United States,” according to a May report on housing justice from the University of California, Los Angeles’ Luskin Institute on Inequality and Democracy.

“This is unprecedented. We’re in a pandemic and we’re asking people to stay in their homes,” says Graciela Aponte-Diaz, director of federal campaigns for the Center for Responsible Lending, a Washington, D.C.-based housing advocacy group for society’s marginalized people. “It’s very scary because for these evictions to go through, you’ve got to have sheriffs come, notify folks. I can’t even imagine where people will go.”

The Aug. 21 “blockade” outside the L.A. County civil courthouse, and others that followed, demanded relief for renters in real danger of losing their homes as a result of the coronavirus.  It was organized as California Gov. Gavin Newsom and the state legislature struggled to compromise on a bill to prevent a painful deluge of tenant removals once the state’s existing emergency eviction freeze expired on Sept. 30.

The final deal out of Sacramento – Assembly Bill 3088 – was signed by Newsom on Aug. 31 and declares that no tenant can be evicted before Feb. 1, 2021, as a result of overdue rent related to COVID-19. It landed just as the CDC announced its own unprecedented moratorium, which would last through the end of 2020 and make it illegal across the country to evict tenants unable to pay their rent.

“COVID-19 has impacted everyone in California – but some bear much more of the burden than others, especially tenants struggling to stitch together the monthly rent,” Newsom said in a statement, “and they deserve protection from eviction.”

Both moratoriums left unresolved the mountain of debt that await 40 million tenants across the U.S., including 17 million in hard-hit California.

The eviction moratoriums fail to protect tenants from eviction for reasons unrelated to an inability to pay rent.

They also fail to protect tenants from eviction for reasons unrelated to an inability to pay rent (such as the expiration of a lease, accusations of property damage or a landlord simply deciding to take the unit off the market).

“It’s not a safe environment in which to be evicted,” says Cynthia Strathmann, executive director at Strategic Actions for a Just Economy, which participated in the courthouse protests. “If you end up living on the street, just because somehow your eviction wasn’t related to COVID doesn’t mean that your body isn’t still susceptible to COVID. That’s a problem that’s not really getting addressed.”

Under the new federal protections, all unpaid rent will be due on Jan. 1. With the additional state safeguards, California tenants must still pay at least one-quarter of their rent by Jan. 31. Tenants in the state can’t be evicted for failing to pay their rent, but landlords can take them to small claims court for the unpaid rent beginning in March 2021.

“This is literally like the Great Depression, and you need a New Deal-style relief program,” says Los Angeles City Councilmember David Ryu, who is urging his municipal colleagues to support a rental debt forgiveness plan, potentially funded through a Federal Reserve lending program created by the CARES Act in March.

“This is literally like the Great Depression, and you need a New Deal-style relief program.”

“The time for austere measures is over,” Ryu adds. “This is when government needs to step up, when nobody else can do it.”

But with the U.S. Senate and House likely to remain deadlocked along party lines over the size of any new relief package, no federal help is expected before the Nov. 3 presidential election.

The crisis exacerbates an already dire situation in cities like Los Angeles and San Francisco, where high rents and homelessness have been raging issues for many years prior to the pandemic. In L.A., homeless encampments stretch beyond parks and beneath freeway overpasses to beaches and to the edges of golf courses.

“The way in which California is unique is the already high cost of housing and that we have the largest population of un-housed people in the country,” says Jen Kwart, spokesperson for California Assemblymember David Chiu, a co-author of AB 3088. “If we don’t do something to prevent more people from losing their homes, [previous] efforts could completely just be for nothing.”

From January 2018 to January 2019, L.A. County’s homeless population jumped by 12 percent, adding nearly 6,200 people. The UCLA Luskin report notes that this occurred even as Los Angeles was enjoying a historically low unemployment rate of 5 percent or less. That meant unemployment wasn’t the cause of new homelessness, but skyrocketing rents were. Most alarming, 600,000 residents of L.A. County were in households spending at least 90 percent of their income on rent, according to the Economic Roundtable, the Los Angeles nonprofit that provides nonpartisan analysis for public policy. (Households that allocate more than half of their budgets for rent are considered severely rent-burdened by the U.S. Department of Housing and Urban Development.)

“Even before the pandemic, the lack of adequate income to pay rapidly increasing rent was already the leading cause of homelessness in Los Angeles County,” according to the Luskin Institute. The study notes that the pandemic has only made existing inequalities more severe, while “the burden of the crisis [is] carried disproportionately by poor and working-class communities, especially those of color.”

City Councilmember Ryu grew up as the child of immigrants, and experienced poverty and home insecurity firsthand. He was 15 when his father returned to South Korea, leaving Ryu partly responsible for maintaining the household.

“I had to balance the checkbook. I remember the water and power being turned off because my mom couldn’t pay the bill,” Ryu says. “So I know what it means. I don’t have to imagine it.”

He’s been active on housing issues, including proposals to convert commercial properties into residential spaces. He describes the council as largely progressive but still hesitant over concerns about debt and damage to the city’s Moody rating, a measure of creditworthiness that can dramatically affect the cost of borrowing for a city.

“The divide between the haves and a have-nots and the cost of living in L.A. is just skyrocketing. We were already trying to address this problem,” Ryu adds. “Angelenos have taxed themselves beyond what Californians do to tackle homelessness, to tackle poverty, to tackle housing issues. And the progress that we made was literally wiped out in a matter of weeks. I was just crying.”

Any landlords motivated by the prospect of raising rents following evictions from their units may be in for disappointment. Despite soaring rents from before the outbreak, a new windfall is unlikely as mass evictions, mass vacancies and increased homelessness potentially lead only to lower rents and falling property values.

Rent in Manhattan is already down an average of 6 percent in the wake of COVID-19, with vacancies more than twice what they were a year before. San Francisco rents have fallen nearly 12 percent during the same period.

After the federal order ends on Jan. 1, landlords can move to evict tenants in California for non-COVID-19 reasons. That will force some of the most vulnerable into court, where they will be unable to follow social distancing guidelines advised by the CDC.

“The last thing we need is a whole bunch of people being displaced,” says Elena Popp, executive director of the Eviction Defense Network, which provides legal services to tenants. “I just got back from court: The halls were busy. I felt unsafe.”

Tenants could be faced with an even worse health and housing disaster in a matter of months without additional action, Popp says. The solution to the coronavirus housing crisis is not just relief, but time: “We need a full moratorium on all evictions for 90 days after the state of emergency ends.”