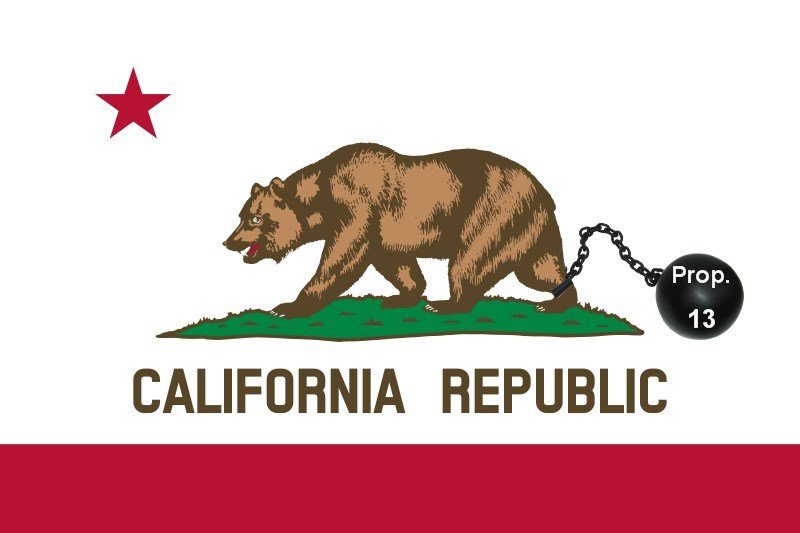 California is earthquake country but one seismic shift rumbling through the state won’t require bottled water and a three-day food supply.

That would be the political and demographic groundswell toward challenging elements of Proposition 13, the property tax measure passed by California voters in 1978 by a landslide and which has been considered untouchable ever since.

“Prop. 13 has been a contentious part of the political landscape for 40 years,” says John Kim of the Advancement Project, one of the organizations comprising Make It Fair, a coalition of 22 statewide organizations and 200 endorsers seeking Prop. 13 reforms.

The watershed initiative became synonymous with protecting the little guy after homeowners’ property tax rates grew so high in the 1970s that people on fixed incomes couldn’t afford to pay them. But from the start, a piece of the measure has protected the not-so-little-guys.

The commercial property tax provision of Prop. 13 allows many corporate landowners to pay taxes fixed at 1975 levels, with only modest increases, and deprives the state of more than $9 billion a year in revenues , according to a University of Southern California study. Residential taxpayers shoulder the bulk of the burden of supporting California’s recession-battered budget and infrastructure.

Prop. 13 deprives California of more than $9 billion a year in revenues

Last week Make It Fair launched an education campaign proposing to close to Prop. 13’s corporate property loopholes. So far, a ballot proposition isn’t in the works – instead, proponents are working on a legislative route and say they are in conversations with state Senators Holly Mitchell and Loni Hancock.

The California Tax Reform Association analyzed state data county-by-county and, citing Legislative Analyst reports, demonstrated that the residential taxes in 2011-12 “bore between 70 percent and 75 percent of the roll.” The study puts the business property tax share at 28 percent, with commercial/industrial at 22 percent and agricultural property at six percent.

“Most people don’t even realize that commercial property is part of Prop. 13 and certainly don’t realize that there is this minority of corporations and wealthy individuals that are essentially paying 1975 levels of property taxes,” says Anthony Thigpenn, President of California Calls, an alliance of 31 community organizations throughout the state, and which is a member of Make It Fair.

But California’s evolving political and demographic realities, he says, have created openings to change the previously sacrosanct tax policy.

“The consequences of this provision of Prop. 13 have become increasingly clear,” Thigpenn says, as Californians realize the cuts it has meant to public schools and universities, the health care system and the public safety net. There were “15 to 20 billion dollars in cuts throughout the Great Recession,” he says.

Thigpenn’s view of the political landscape is shaped by 30 years of political organizing and honing a get-out-the-vote system that identifies and engages voters that pollsters usually don’t talk to—the “occasional” voters who need education and support to get to the polls.

Those were the voters behind the passage of Proposition 30 in 2012, which restored $6 billion in revenues to the state budget, Thigpenn says. California Calls was part of the coalition Reclaim California’s Future, a coalition that conducted a community and labor get-out-the-vote effort for Prop. 30 that talked to more than 1.5 million people, he says. Post-election data analysis showed that California Calls alone turned out 440,000 voters.

Reclaim California’s Future was made up of nine statewide organizations— the Make It Fair coalition is much broader, Thigpenn says.

“That sets the stage for what we know we can do—if we have a plan that can build on that and increase that, it changes the equation,” he says.

Not so fast, says Kris Vosburgh, executive director of the Howard Jarvis Taxpayers Association, the anti-tax organization named for Prop. 13’s co-author. “It’s not destined for the ballot,” he adds, referring to Make It Fair’s loophole-closing proposal, calling the idea wishful thinking. “I’ve been here for 25 years and they’ve been talking about it and nothing has gotten done.”

All that proponents of Prop. 13 reform have done recently, Vosburgh claims, is hold a news conference. He criticizes their efforts as the work of “a handful of Bay Area radicals and public employee unions.”

Vosburgh says Make It Fair is part of an anti-business culture that makes California unwelcoming to business. “Companies are running jumping and leaping and going to other states,” he adds. “And homeowners rely on those businesses for jobs to make their mortgage payments.”

But Make It Fair’s John Kim says the alliance sees small business as a core element to driving forward the economy. If you run a small business in California now, he says, “You have to compete with old-school legacy corporations holding on to decades-old tax breaks.” The coalition’s proposed reforms include tax breaks aimed at small businesses, such as exemption from the taxation of business property, including machinery, equipment, fixtures and computers.

It would be weeks before any bill addressing Make It Fair’s proposals could be presented for discussion in Sacramento. If it fails in the legislature the coalition will make decisions about other options, Kim says. “All options are on the table. This is not about a policy idea—it’s about a movement.”