‘Tis the season of miracles.

That’s not a phrase that sits easily with the modern mind. Nevertheless, the stories with which we mark this time of year all contain gestures, unexpected motions and things hoped for — but that are not at all certain or even vaguely possible. The lamp held enough oil for a couple of days at most, but it stays lit for eight – until more can be brought from a distance. A peasant sees the Virgin Mary but, of course, the local bishop doesn’t believe that such a simple person would be visited by Her, but another vision accompanied by long-stemmed red roses convinces him. A poor working family bears a child in circumstances no middle class American can quite grasp, and people think this one will be the liberator of his people. Those are miracles.

Of course, these stories update a deeper and even older human experience when the ancients awaited the sun’s return. They watched as the light waned and the days grew shorter, hoping that it would not disappear altogether and leave them in darkness and hunger. Then it returns, guaranteeing the light, warmth and life-giving sun that mean survival. This moment was so important that people built monuments to mark the solstice – places like New Grange in Ireland, where the morning light only penetrates the deep interior on that one day of the year’s cycle. A miracle. 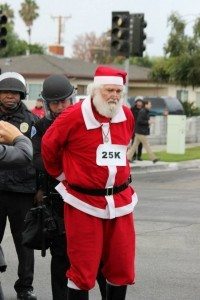 This has been a year of miracles. No one expected an uprising of fast-food workers to abandon their minimum-wage jobs and parade through the streets of major American cities protesting their pay and working conditions. No one expected a campaign of civil disobedience against a giant like Walmart. Certainly no one expected people to get arrested protesting in a place like the warehouses of the Inland Empire.

No one expected this to be the year of raising the minimum wage. The President talked about it, but everyone knew Congress would do nothing. So cities and counties and states across the country acted. From New Jersey to Albuquerque to New York to Connecticut, from Montgomery and Prince counties in Virginia to SeaTac, Washington — all voted to raise the minimum wage. Here in Santa Monica the city council set a new wage standard for hotel projects of $15.37. Citizens in these places understood that workers could no longer live on the low scale set by the federal government – so they raised it themselves.

For years, Hyatt hotels would not sign a contract with its workers. For years they kept them at minimum wage. For years Hyatt was the wedge in the hospitality industry keeping their employees voiceless, divided, powerless. Then Long Beach – not a known location of embedded progressives – passed a wage standard for hotel workers, blindsiding Hyatt and its allies. Now Hyatt has signed a national agreement with the hotel workers union and five new hotels actually have contracts in cities where none had ever existed before. For these workers, a miracle indeed.

But miracles never happen by accident. They take hard work. Hundreds worked on that campaign for decent wages in Long Beach. Someone had to go get the oil to keep the lamp burning. Someone had to speak truth to power, keeping the pressure on the fast-food business, so voters would understand they had to support higher wages. Someone had to tell the bishop twice – and bring roses – to get him to listen. Lots of people had to suffer as deeply as the pangs of birth for the Apartheid government of South Africa to dismantle its oppressive system, and, equally, for Americans to end segregation in the United States. (Who even thought there would be movies this year about both these breakthrough events!)

Earlier in the year the Catholic Church elected another Pope. No one expected much. He seemed compassionate enough, but his track record was mixed at best – and he himself had already submitted his retirement letter. Instead he sounds like a young man on a mission. He speaks of justice. He spends his birthday with homeless people. He calls on the religious everywhere “to eliminate the structural causes of poverty.” Like the solstice itself, born in winter darkness, he brings words of light and hope.

AMP-ing Up the Fight Against Evictions

The Give and Take of Charity