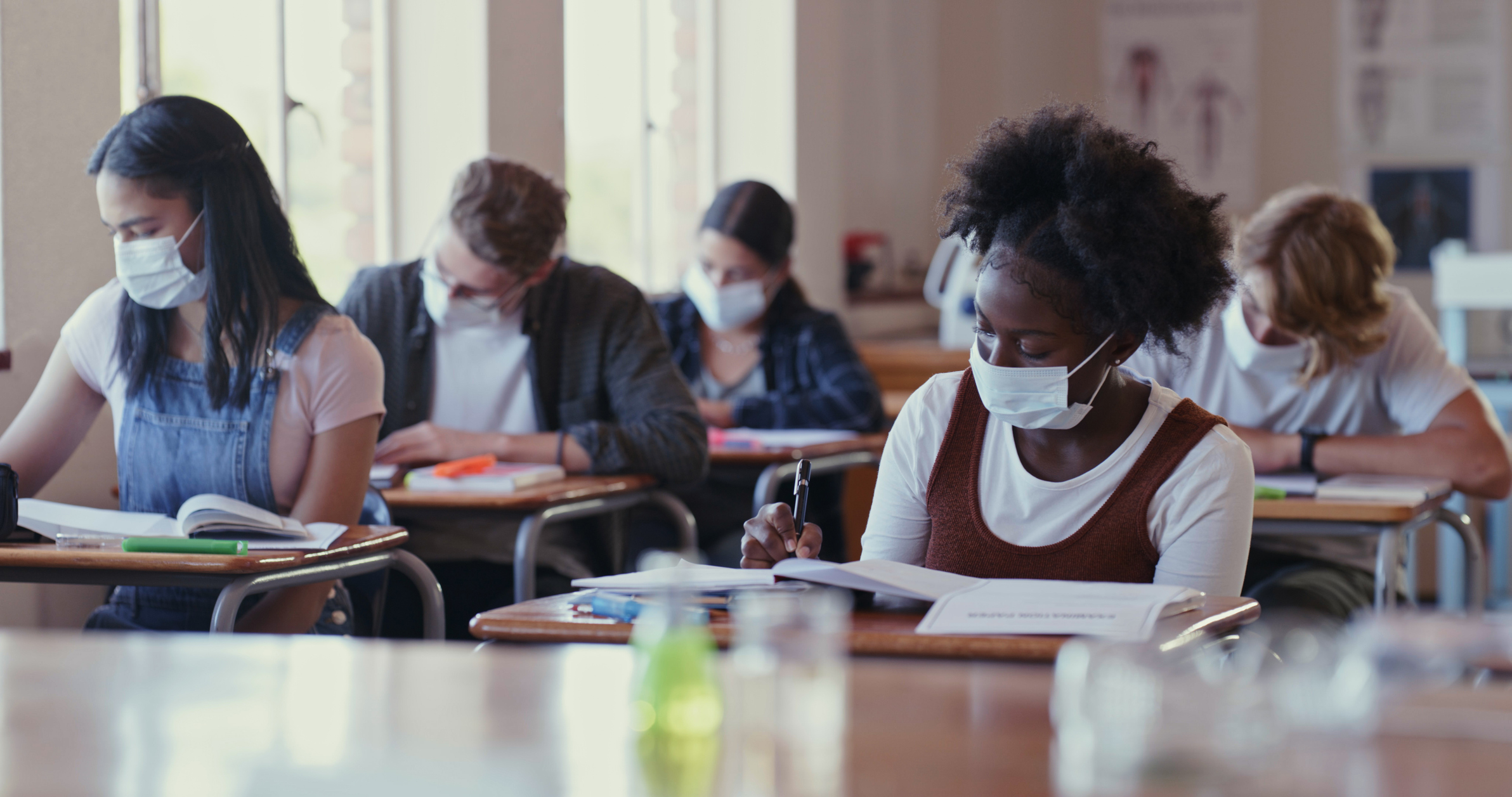 Almost as soon as the pandemic forced school closures and a shift to online classes in 2020, social scientists and educators worried about the obvious: Not only was COVID-era learning going to be erratic and imperfect, but the greatest challenges were going to be visited upon the students who could least bear them.

Two years later, researchers say, that’s exactly what happened. Viewed from every angle, COVID’s most corrosive effects have been felt by students from lower income families and communities of color, widening an education gap that existed long before the pandemic hit.

It is a story of failed infrastructure and inadequate investment in the educational future of Black, Latino and multiethnic students, critics say. But this is also part of a larger pattern: the cycle of disadvantage that keeps poor people poor.

“We’re talking about a person’s reduction in lifetime earnings that can run into the millions of dollars.”

“I’m not going to say it’s a lost generation, because it’s only a couple of years,” said Steve McDougall, a teacher and union leader in the Salinas Union High School District, whose student enrollment is more than 90% Latino. “But it did happen across all grades. There will be a significant cost, no question.”

In America, a person’s level of educational attainment and ability to earn correlate almost precisely. The pandemic did no demographic any favors, but it set back students of color the most. The results could be felt for years to come.

“We’re talking about a person’s reduction in lifetime earnings that can run into the millions of dollars,” said Rodrigo Dominguez-Villegas, director of research at UCLA’s Latino Policy & Politics Institute. “In the United States, education is a huge component of stratification, and the gap is real.”

Secondary education during COVID was always going to be a brutal challenge. Districts and schools had to switch on the fly to teaching students via Zoom. Technical issues became a given. Students’ interest in the arrangement waned almost immediately, with attendance drop-offs across the board, and the ability to use a computer or get reliable internet access became the dividing line between those who could participate and those who couldn’t. For some, household chaos — often roiled by job loss that was either temporary or permanent — further impacted their ability to keep up with studies.

These were problems common to almost all districts. But by no means were their effects felt equally.

A recently released survey by the Pew Research Center bears that out. Among other things, the survey found that 24% of teenage students living in households with incomes of less than $30,000 said they couldn’t finish their homework because they didn’t have a computer or reliable internet. Some 35% reported having to use their cell phones to finish assignments, while 17% said they had to draft off public Wi-Fi to get them done.

Among students in households with incomes of $75,000 or more, those figures dropped to 8%, 19% and 4%, respectively. With income levels driving the results, students of fewer means often struggled to stay afloat.

“That’s what we experienced,” McDougall said of the Salinas district, a largely agricultural area filled with low wage jobs, where 86% of the 16,000-plus high school students qualify for free or reduced price meals. “For lots and lots of reasons, these students — many of them from families who work in the fields around here — fell further back.”

Many low-income homes lie in digital deserts, which are disproportionately located in communities of color and rural areas.

Many may stay there. Using U.S. Census Bureau data, a UCLA study co-authored by Dominguez-Villegas found that Latino, Black and multiethnic students were vastly more likely than their white or Asian counterparts to postpone college plans — or cancel them altogether — because of pandemic-related complications. That gulf remained even after COVID vaccines became available, although the raw percentages dropped for all races and ethnicities.

Those kinds of differences were at the heart of teachers and administrators’ concerns about what the pandemic would do to students from lower income homes. Many of the homes lie in digital deserts, which are disproportionately located in communities of color and rural areas. The move to online learning, forced by the full closure of schools and districts due to viral outbreaks and community shutdowns, exacerbated the issue.

Stories abounded during the pandemic of school districts fighting that trend with the resources they had. The Salinas district issued a Chromebook to every high school student. The heavily Latino Lawndale Elementary School District, southwest of Los Angeles, issued two devices to students from kindergarten through fourth grade — so they had one at school and one at home — and made social workers and community liaisons available on every campus. “Declines [in participation] were not nearly as bad as we anticipated,” said retiring district superintendent Betsy Hamilton. “Nonetheless, there are challenges.”

Those challenges go well beyond issues like connectivity. Dominguez-Villegas noted that among Latino students who said they were putting off or shelving college plans, the top two reasons were that they couldn’t afford it and that they had family members to take care of, including those stricken by COVID and younger siblings who were learning remotely and needed someone at home.

The pandemic led to mass layoffs of those in jobs generally held by people in lower income households: hotel and restaurant workers, landscapers, warehouse and service industry workers, and those laboring in agriculture, among others. Because undocumented immigrants didn’t qualify for most COVID relief programs, many of the households saw their incomes drop off dramatically for months and months before the market began to recover.

“Latinos also got infected at high rates. They’re more likely to live in multigenerational housing where the spread of the virus was higher, and even if they were able to stay on their jobs, those jobs often don’t allow them paid sick leave,” Dominguez-Villegas said. “As a result, many of these households suffered terribly during the pandemic, not just with illness but with financial hardship.”

Long-standing economic gaps factored in, too. McDougall noted, for example, that the Salinas district is filled with households in which both parents work “from dawn to dusk,” leaving the idea of remote learning solely in the hands of the students who are being asked to do it. By contrast, higher income households often had a parent present during the day, including those who could work from home.

Socialization skills among students were severely diminished over the past two years, impeding their ability to function and learn in group settings.

Educators and researchers are still tallying up the damage done by the pandemic and its successive shortened academic years. McKinsey & Company, a global management consulting firm, estimated that the 2020-21 school year alone left students on average five months behind in math and four months behind in reading. The math lag jumped to seven months for those in schools populated by low income families.

Not only are lost teaching days a critical problem for K-12 students (particularly those in high school), but socialization skills among students were severely diminished over the past two years, impeding their ability to function and learn in group settings. In the larger picture, though, some of this fallout simply won’t be known for years, when it becomes clear what extended periods of remote learning, financial hardship and family trauma have done to the next generation of students of color and those from lower income households.

Dominguez-Villegas, whose focus is on the Latino community, said that a post-COVID recovery at the university level has to account for the educational and financial blows dealt to lower income students during the pandemic. From individual schools, that would include wraparound services, with housing and stipends that would allow them to be at school while still helping their families financially. At the governmental level, extending assistance programs to families regardless of immigration status, as California has been doing with Medi-Cal, is a step forward.

Otherwise, the most vulnerable students in America will continue to fall behind — and so the cycle of inequality will be perpetuated. As the nation emerges from its collective COVID haze, a fierce commitment to the education of all its students is the most direct way to break that chain. “The good jobs in this country require degrees,” Dominguez-Villegas said. It is as true now as it ever was — and a far more urgent concern.