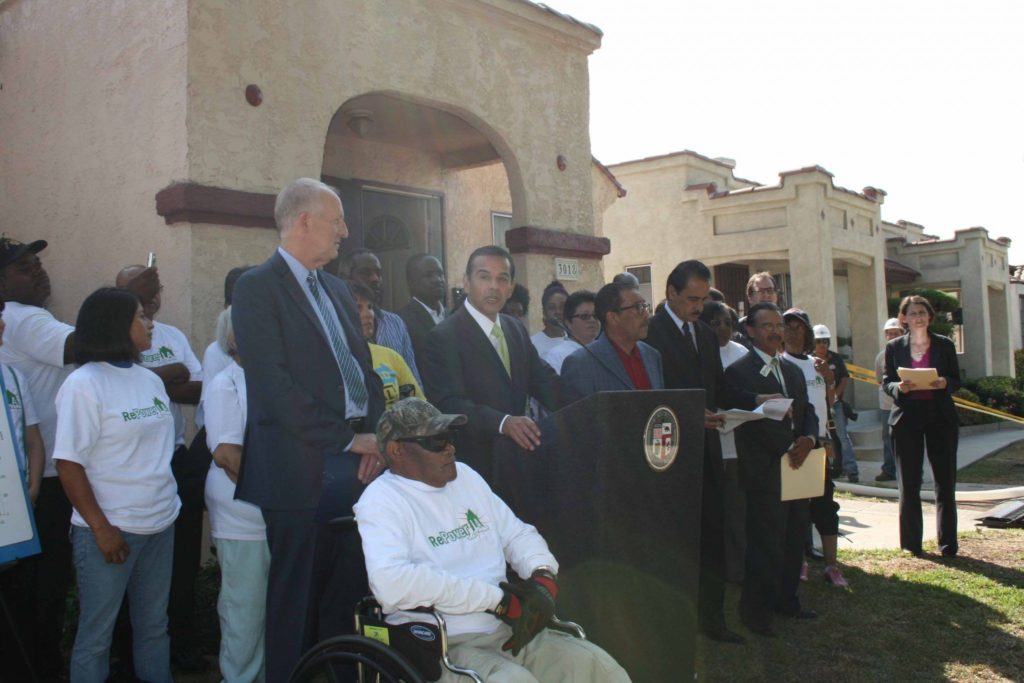 Los Angeles, long fighting its reputation as one of the least green cities in the country, is making real changes to improve its standing.

City leaders and members of RePower LA gathered Monday, September 17, to recognize the City’s major strides in energy efficiency. The event took place at a South L.A. home while workers demonstrated an energy efficiency upgrade on the residence. It was part of a Department of Water and Power (LADWP) program championed by the RePower LA coalition. Mayor Antonio Villaraigosa, City Council President Herb Wesson, Councilmember Richard Alarcon, DWP General Manager Ron Nichols, business leaders and residents each spoke about the importance of energy efficiency and job creation, particularly in the current economy.

““We have a responsibility for those who follow us,” observed City Council President Wesson. “We want to provide them with the same opportunities, and in order to do that, we have to come up with efficient ways to produce energy. And I think what’s happening today is a perfect example of that.”

“You’ve heard energy efficiency is the cleanest, most cost-effective way to meet energy demand,” added Jessica Goodheart, Director of the RePower LA campaign at the Los Angeles Alliance for a New Economy. “That’s great news for L.A. residents and businesses who are struggling right now. It also benefits our environment, saves customers money and creates jobs here in Los Angeles. The RePower LA coalition has made it clear that we need programs that help all of the Department’s customers – that energy conservation is as important in South L.A. and Pacoima as it is in Brentwood and the Hollywood Hills.”

The mayor noted that on jobs such as the home upgrade performed Monday, “Work will be done by Utility Pre-Craft Trainees, made possible by a partnership between IBEW [International Brotherhood of Electrical Workers] Local 18, the Department of Water and Power and RePower LA.”

Then, motioning toward the council members present, Villaraigosa said, “One of the things we said was important is…[making] sure that the workforce looks like their customers, looks like L.A. and comes from every part of the city…. This program is designed to provide a pipeline to career paths for our hardest-hit communities.” 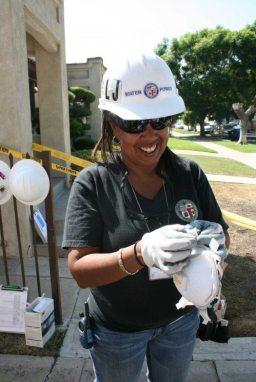 Trainees working on the South L.A. home expressed appreciation for the opportunity to develop skills while also serving the public. L.J. Davis shared a bit of her story as she explained the work to the gathered crowd.

“I have been in the program for approximately 17 months,” she said, “and before then I was one of those unemployed people for seven years. So this has really been a very true blessing for me. And I have learned so much.”

Councilmember Alarcon, an early supporter of RePower LA, stated that “in my district we have the highest number of single-family foreclosures in the city. We have to use the latest technology to…make these homes affordable.”

Business owners expressed excitement that LADWP will extend energy upgrade installations to business facilities in the near future. Taylor Mayfield, who runs Tax Ease Plus Accounting Services in Leimert Park, said such work was even more critical in the present economic climate.

“In these difficult times, and in an area where unemployment is high, it’s a struggle to keep the door open month to month,” said Mayfield. “I could use anything that would help lower overhead.”

Ramiro Estrada, of San Fernando Realty and the Pacoima Chamber of Commerce, agreed.

“I’m excited that the small, locally owned businesses that power the local economy will be able to save energy,” Estrada said. “I can’t wait to start promoting this to the businesses and all our members in Pacoima as well as around the L.A. area.”

The new programs will have a significant impact on both the personal and city-wide level. 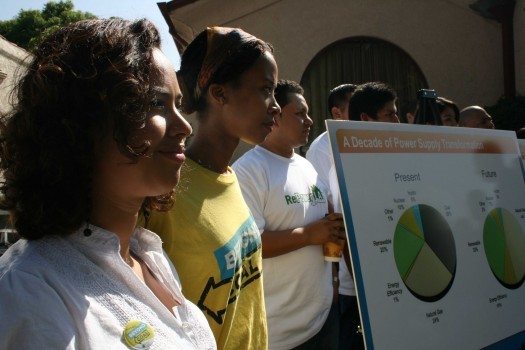 LADWP General Manager Ron Nichols described the effect of exceeding 10 percent energy efficiency savings, which he said would be the equivalent of meeting all the energy requirements of 400,000 homes.

“This is a great opportunity,” Nichols said “It’s a major commitment. It’s the right commitment. It saves energy, it creates jobs, it reduces our emissions and our carbon footprint and it saves all of our customers money, in addition to those customers where we conserve. It’s a good day for L.A.”

“I am so excited,” said Ada Obijiaku as LADWP workers set up to test vents and install insulation in the home she and her husband have shared since 1983. Both are public employees who have dealt with pink slips in the past year. “Thank you so much for making me and my family a part of this program.”

Proposition 39: Bringing Jobs Back to California