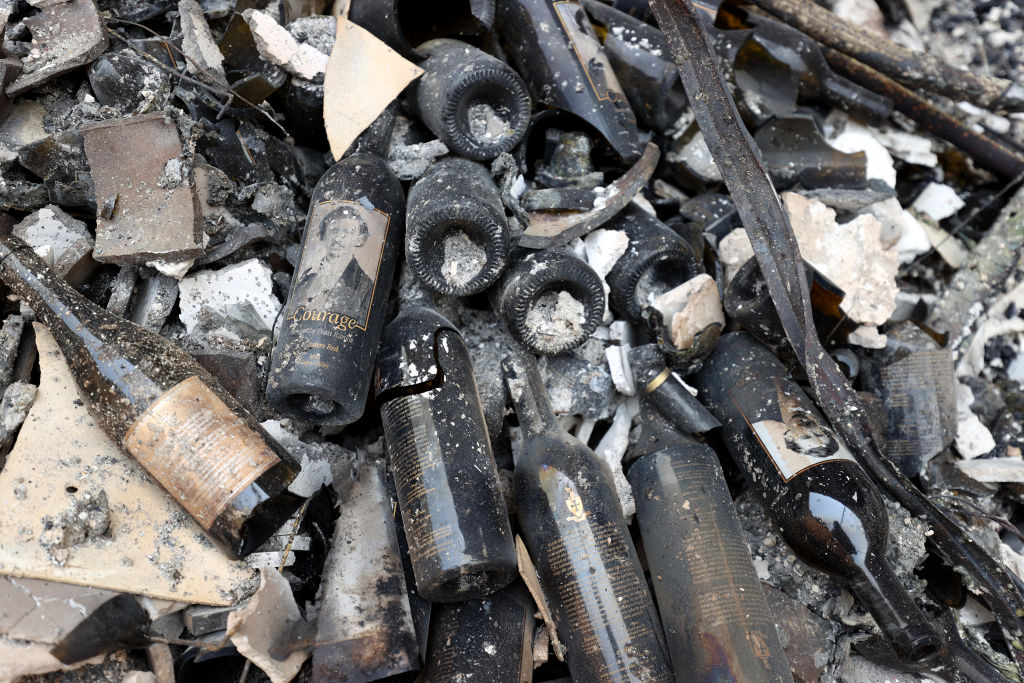 Charred bottles at the Fairwinds Estate Winery in Calistoga, which burned down during the Glass Fire. Photo by Justin Sullivan/Getty Images.

Robin Cooper remembers the arrival of the blaze last autumn in her patch of wine country. “We could see the fires converging and coming up over the mountain,” she said. “There was a  lot of smoke. Horrible, horrible air quality. We could see flames.”

Cooper, the 64-year-old director of hospitality and customer relations at the small Behrens Family Winery in St. Helena, fled with her colleagues as part of a large-scale evacuation.

When they returned to the winery after the Glass Fire passed, the scene was apocalyptic. The main building, the guest apartment and the case goods room storing thousands of bottles of wine were all gone. Along with the rest of the wine stock there, Cooper’s personal collection of more than 1,500 bottles had literally gone up in smoke.

What did the epic blaze leave behind? Piles of glass, charred barrels, fermenting bins and “rivers of wine mixed with plastic,” she recalls.

Behrens was one of dozens of prestige wineries in Napa and Sonoma counties that were badly damaged or destroyed in 2020. “I guess that’s part of living in California these days,” Cooper says.

The fires were hardly the only challenge. “Last year, you couldn’t be indoors because of COVID and outdoors because of the smoke,” recalls Napa Valley winery owner Stephanie Honig.

“And it was in the middle of harvest — and people were working in N95 masks. It was,” she adds, “the most devastating year.”

These are complicated times to make wine in California. As 2021’s fire season gets underway, winery managers and employees destabilized by the pandemic know they could face more wind-fanned flames, fire-red skies and crop destruction. Meanwhile, COVID-19-battered vineyards took a huge financial hit, leaving them vulnerable.

Early in the COVID shutdown, Napa’s unemployment rate leapt to 16%. Tourism also tanked, with hotel occupancy in the county plummeting. Just 41% of rooms were occupied in 2020 compared to more than 70% in a typical year.

Then, throughout last summer and fall, vineyards and wineries were scorched and smoked. Many of the vintners whose wineries escaped the flames discovered that smoke and ash made their final product undrinkable — and unsellable.

As California gradually emerges from the pandemic, an economic hangover lingers over the industry, raising a question: What sort of wine world might we wake up to?

Of all our culinary hobbies, wine tasting may well be the most intimate. A customer traditionally stands close to tasting room staff and fellow tasters. People lean into their wine glass, sniff the wine, swirl it about in their mouth and then spit it into an open container.

It is, in short, a COVID-era nightmare. Not surprisingly, the pandemic has forced a fundamental rethink of how wineries operate.

In Amador County, the Andis winery’s tasting-room manager Shannon Landis explains that ongoing discussions continue about how best to organize such experiences so that staff and customers feel safe. “We don’t want to go back to shoulder to shoulder in the tasting room,” Landis said.

Where staff used to cram 70 people into the small tasting room, they have recently been catering to just 20 or so at a time, arranged at well-spaced outdoor tables. Much of their business has also been channeled toward curbside pickup in recent months.

The tasting room at Cooper Vineyards was also transformed. The artisanal, family-run winery, also in Amador County, relied on wine club members to engage in drive-by pickups. “We became a shipping business,” says tasting-room manager Jeri Cooper Swift, the daughter of the owner.

Initially, the Coopers tried to modernize for the COVID-19 era, installing plexiglass dividers segmented into panes by a local artist with wood from the vines. The goal was to keep staff and customers as safe as possible. But when pandemic restrictions tightened, all indoor tastings and dining in the region was prohibited for months at a time.

The Coopers then invested in outdoor tables and chairs, but when the virus was spreading uncontrolled, even outdoor tastings were prohibited. During the complete service shutdown, management invested to train tasting-room staff for a future outdoor reopening that they hoped would come soon. The idea was to make sure they knew how to serve wine to socially distanced clients, as well as how to discourage them from congregating in close quarters inside the tasting room. 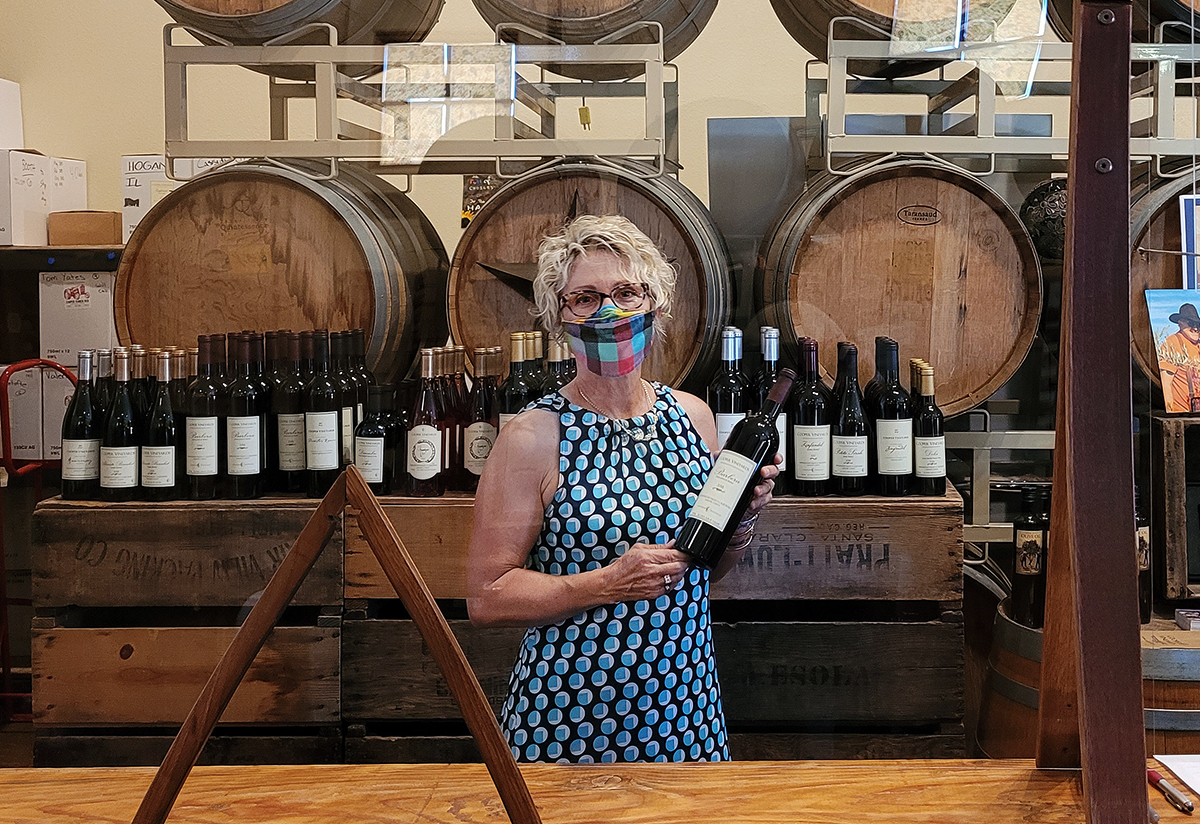 Jeri Cooper Swift smiles from behind a mask and a plexiglass barrier in the Cooper Vineyards tasting room. Photo by Sasha Abramsky.

More recently, when the wineries finally began to more fully open up again and welcome tasters back indoors in small numbers, some inebriated anti-mask customers argued with staff at places like the Andis winery.

Concerned about such a work environment, Landis says that management sought to discourage groups that might become problematic from coming. “We don’t want busloads of bachelorettes,” she says. “We’re trying to discourage the celebratory tastings.”

But given the pent-up thirst among Californians itching to get out again, restricting the number of visitors at California’s 4,200 wineries — most of them small, family-owned affairs — may be easier said than done.

Winery staff, categorized as agricultural workers, qualified for vaccinations early this year, and wineries report very high vaccination rates among staff. Still, the formal reopening of much of the state has come with public health unknowns and corresponding concerns from workers.

The pandemic has also sparked high turnover among winery staff, and many of the new employees have never worked an indoor tasting before. “It’s very overwhelming. There’s a lot of crowds. It’s exciting, but it’s an adjustment to be sure,” says 25-year-old Koko Carmen, a tasting room associate at Villa Toscano. Until recently, Carmen worked solely at a local Starbucks, but now does both jobs.

She notes that some customers, mainly older people, are either refusing to wear masks or are ineffectively wearing them only over their mouths. “I generally don’t fight that battle,” Carmen admits. “As long as they have it on, I leave it to my manager.”

The Dream and the Pandemic

COVID-19 came for Marco Buffa’s previous job before the fires reached wine country. “I was working in a restaurant and lost my sommelier and server job with the shutdown,” says the 28-year-old Italian, who migrated from Florence to pursue his California wine dream two years ago.

In search of work, Buffa went from winery to winery, dropping off copies of a résumé highlighting his years of study in the field, before finally getting a job as a wine educator at the Andis winery. There he speaks to customers about the 8,000 cases of Zinfandel, Barbera and other wines produced there in a typical year.

Starting a job during the pandemic was, to say the least, strange. “Everything was closed, and we were just doing shipments because tasting wasn’t allowed.” To while away his extra time, he spent the months reading, drinking and studying.

The California wine industry has an overall economic footprint of $57.6 billion. Of that, $17 billion goes to pay workers.

In early May, days after the county began to allow some indoor tastings again, Buffa sat in the spacious outdoor tasting area behind the winery’s large, modernist metal edifice in the Sierra Nevada foothills, ecstatic. “I like to be outside in these beautiful vineyards and tell stories about the wine,” he said.

“I went through the phase where I was a little bit scared about COVID. Now, I’m less scared.”

If people like Buffa are truly safer, that would be a good thing given the importance of wine production for the state. The California Wine Institute calculates that the industry employs 325,000 people, with 37,000 working in wineries. The industry has an overall economic footprint of $57.6 billion in California. Of that, $17 billion goes to pay workers, including those who plant, care for and harvest the grapes, and others who make the wine.

The health and safety of some of those workers aren’t always respected. In September, as mega-fires devastated the region, low-paid grape pickers in Sonoma County — many of them undocumented — were particularly hard hit by COVID-19 that in some cases compromised their lungs. Farm workers and food packers were among the most affected workers in the country. On top of that, the Intercept reported that some were given evacuation-area passes by the county agriculture commissioner that made it possible for their employers to keep them working in the smoke-and-ash-filled environment, even as their more affluent neighbors were ordered to flee the region for health and safety reasons.

Similar exemptions had also been granted during the vast conflagrations that tore through the county in 2017 and again in 2019.

Looking ahead, there are lessons from the almost biblical-scale challenges that the wine country has endured in recent years. During the most recent wave of pandemic shutdowns around the start of 2021, local wineries used the pause in business to prepare for fire season. They cleared land of dead brush, pruned back trees and, in some cases, bought sheep to eat down overgrown grass and weeds.

A few wineries, including Cooper Vineyards, bought old, decommissioned fire trucks and retrofitted them for use on their properties.

Insurance companies are increasingly unwilling to renew policies for wineries due to the risk of wildfires.

Such measures cost money, making it that much harder for family-run wineries already hammered by the pandemic and previous fires to stay viable.

These investments aimed at helping their businesses to survive come at a cost to such wineries’ bottom lines — the same bottom lines that pay their employees.

And the seeds of an even bigger financial problem seem to be emerging. Insurance companies are, in some cases, unwilling to renew policies for property insurance due to the risk of wildfires. In other cases, such companies will offer insurance but at renewal rates that have soared up to 500% higher than in the recent past — and they provide less insurance.

Michelle Novi, director of industry relations for the trade association Napa Valley Vintners, says that insurance companies are doing something that is “incredibly problematic” by not taking a nuanced look at the risks, and sometimes simply pulling out altogether.

Even the state-backed insurer of last resort, FAIR Plan, has over the past six months begun to send notices to wineries declaring them potential “farm risks,” which makes them ineligible for such coverage.

Now, as weekend visits and hotel stays in wine country have returned to pre-pandemic weekend levels, even if midweek visits still have a ways to go, it seems likely to take a while for the industry to return to solid footing.

Mary Wilder, who works as a tasting room supervisor at Dillian, says that the past year has “changed every aspect of each of our lives. We’ve all been impacted beyond what we’ve ever experienced before.”

That’s also true at Behrens, where, despite the damage, the tasting room somehow survived the inferno. Management reopened at limited capacity in 2021 after letting go of administrative staff it could no longer afford given its scaled-down production.

The enduring impact of the flames and the pandemic is clear to Robin Cooper. “We were tiny to begin with,” she says, “and will be tinier in our new incarnation.”

Related Topics:Climate ChangecoronavirusFeaturedWildfiresWine industry
Up Next

Will Congress Finally End the Subminimum Wage for Workers With Disabilities?