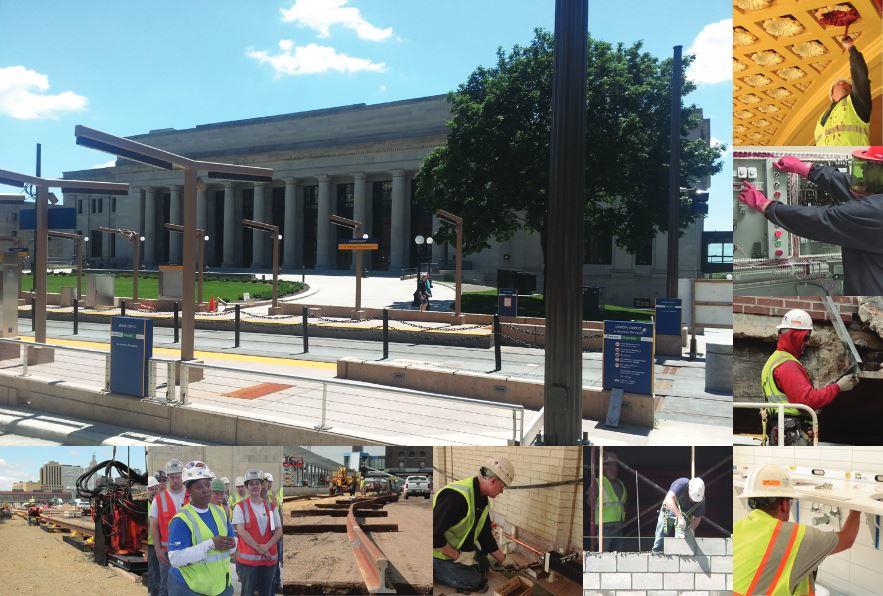 Ever wonder how the reality behind splashy headlines about jobs really stacks up?  I promise you a jolt of hope from reading a new study called Work for All the Crafts: Restoring the Union Depot in St. Paul.

The study was released June 10 by Jobs to Move America coalition leader Good Jobs First, a nonprofit, nonpartisan group that promotes smart growth for working families.  The study shows that the recently completed restoration of the Union Depot — an historic transit hub in St. Paul, Minnesota that is pictured above — employed about 2,000 workers with special skills in 13 different building and construction crafts.  In addition to employing high-demand building tradespeople such as carpenters, laborers and operating engineers, the Union Depot project created work for electricians, bricklayers, plumbers and pipefitters, ironworkers, painters, roofers, sheet metal workers, insulators and elevator constructors. In total, the  project generated more than 660,000 hours of work.

Another heartening finding in the study is that Minnesotans who worked on this restoration project reflected a greater racial and gender diversity than in past projects in the Twin Cities.  The study cites statistics from the Minnesota Department of Transportation showing that minority workers put in nearly 125,000 hours of work on the project (or 18.9 percent of the total), and that women workers put in more than 45,000 hours (or 6.9  percent of the total). The study also reports that 19.5 percent of project contracting went to Disadvantaged Business Enterprises (DBEs), and that the project created new apprenticeship training opportunities for minority workers and women.

While these statistics are admirable, it seems the Union Depot project’s diverse hiring was a result of community engagement and struggle. The study explains how a coalition of more than 70 organizations called “Hire Minnesota” pressured the Minnesota Department of Transportation to increase diversity standards in hiring and sub-contracting, following the controversial firing of an employee whistleblower.

The Jobs to Move America coalition is engaged in a similar effort to stimulate diverse hiring and American job creation in the transportation manufacturing sector. Jobs to Move America advocates for maximizing the value of multimillion dollar contracts that American transit agencies award to global manufacturing companies to build our buses and trains, and for good jobs and opportunities for disadvantaged Americans.

Just as the St. Paul Union Depot restoration project put nontraditional workers in the construction industry to work, so could such large global companies with U.S. contracts as Kawasaki, Bombardier and Siemens hire more American veterans, women and people of color to work in U.S. bus and train factories.

Just as the Union Depot project helped alleviate high rates of unemployment among Minnesota construction workers, so could bus and railcar purchases create good manufacturing jobs for tens of thousands of unemployed Americans struggling in the Great Recession economy.  As I wrote in February, one Minnesota factory is already employing diverse workers manufacturing buses.

Lionsgate Raises Nickel-and-Diming to an Art