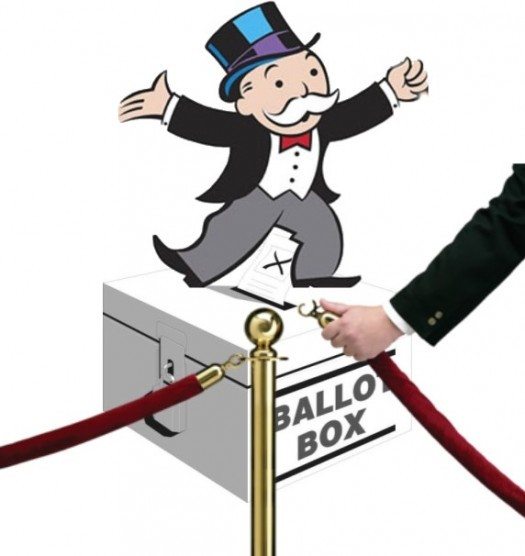 Driven by disgust for the way our democracy seems to be for sale to the highest bidder, several dozen activists from Los Angeles gathered in Mount Washington this past Saturday to rally support for Proposition C, a symbolic measure on the May 21 ballot that urges area legislators to push for renewed limits on political campaign spending.

In late February, the Los Angeles City Council voted 10 to 1 to put the following question on the ballot, introduced by Councilmember Richard Alarcon, who represents the northeast San Fernando Valley and who attended the Mount Washington gathering:

“Shall the voters adopt a resolution that there should be limits on political campaign spending and that corporations should not have the constitutional rights of human beings and instruct Los Angeles elected officials and area legislative representatives to promote that policy through amendments to the United States Constitution?”

By itself, the ballot measure will have no direct effect on campaign fundraising—in Los Angeles or anyplace else—but rather is designed to help focus public attention on the increasingly disruptive role big money plays in today’s elections. If the measure succeeds in liberal Los Angeles, its backers at Common Cause and the California Public Interest Research Group (CALPIRG) will likely attempt to have the issue put on a statewide California ballot. Already, Colorado and Montana—hardly lefty enclaves—have passed similar measures, as have Boston, Chicago, and San Francisco.

Money has always been the mother’s milk of politics, as long-ago California Assembly Speaker Jesse “Big Daddy” Unruh famously said, but the campaign cash flow has become a preposterous torrent in recent years. For example, a single Vegas casino operator spent $200 million in last November’s election, and 61 wealthy donors gave $285 million through political action committees, the same amount it took 1.4 million regular Janes and Joes to contribute through their contributions of $200 or less.

A particular focus for activists has been the effect of the U.S. Supreme Court’s 2010 Citizens United v. Federal Election Commission (FEC) ruling that prohibits the government from restricting independent political expenditures by corporations, labor unions, and special interest groups, arguing that such expenditures are a form of protected political speech. (Restrictions on direct donations to campaigns by corporations remain in place, and the right of individuals—however rich—to give whatever they want to campaigns was already protected by the 1976 Supreme Court Buckley v. Valeo decision.)

Citizens United has become a rallying cry for activists across the country who have used it as an organizing tool to push for fairer and free elections, as with L.A.’s energized Money Out/Voters In organization and WolfPac, organized by Cenk Uygur’s Young Turks.

In their fondest hopes, the activists behind Prop C and measures like it see these messages prompting members of Congress to support a constitutional amendment overturning the Citizen United ruling. All acknowledge that’s certainly an uphill battle, as such an amendment would require a two-thirds vote in both houses of Congress, followed by ratification by three-fourths of the 50 state legislatures—this from a Congress that can’t pass background check requirements for gun purchasers in the wake of epidemic gun violence and from state legislatures around the country that are busy requiring trans-vaginal probes for women seeking abortions.

Which is not to downplay the groundswell of support L.A.’s activist community has gathered to ensure Prop C’s passage. Clearly, Councilman Alarcon and State Senator Kevin de León, who also attended the gathering, are well aware of the corrosive effect big money is having on our political fabric.

If enough elected officials are similarly influenced by events such as Saturday’s gathering and two upcoming demonstrations next Saturday, perhaps momentum can build for public financing of elections—and possibly the Supreme Court would be motivated to modify its Citizens United stance.

Saturday’s event was organized by LA Progressive and Common Cause, whose executive director Kathy Feng spoke at the event and whose Anjuli Kronheim and Brooke Erdman did all the legwork to make the event succeed.

(Dick Price is the editor of LA Progressive, where this post first appeared. Republished with permission. Please Note: Frying Pan News neither endorses nor opposes this ballot measure.)

The New America: A Talk With María Elena Durazo, Part 1