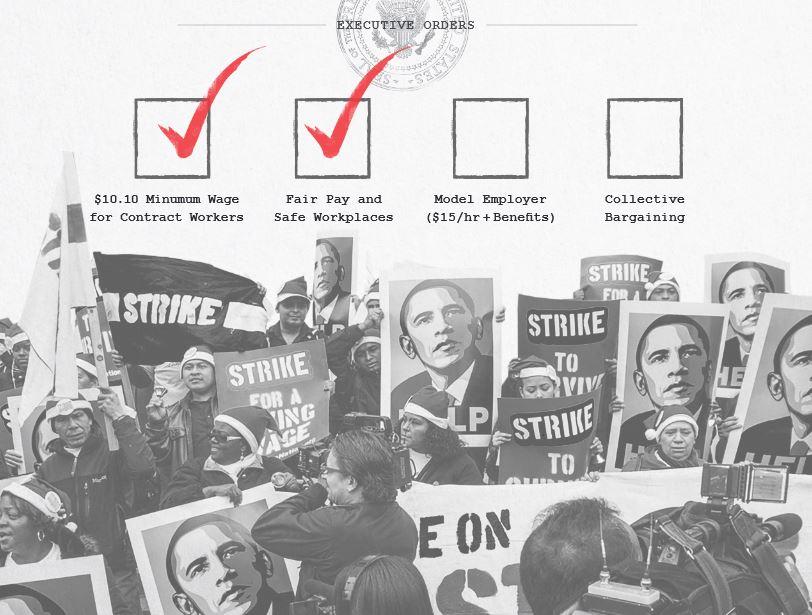 On Thursday, Americans earning low wages from businesses that contract with the federal government walked off the job to urge President Obama to do “more than the minimum” by signing executive orders that ensure workers receive living wages, adequate benefits and a voice on the job.

The organizers of the campaign, Good Jobs Nation, released a report earlier this week explaining why this change is necessary. As one of the nation’s largest employers, the federal government funds nearly two million poverty-wage jobs that pay less than $12 per hour. Unfortunately, many of these workers never receive any benefits such as paid sick leave and are forced to rely on public assistance, which costs more to taxpayers. We already know these same low-wage conditions wreak havoc on state and local economies. Governments may think they are getting a great deal when they outsource services, but when federal contractors fail to pay living wages to Americans providing essential functions, all too often taxpayers end up on the hook to make up the difference via food stamps and other public assistance programs.

President Obama has already issued two executive orders that help raise the living standard for contract workers, but more leadership from the federal government is needed, given the severity of income inequality in this country.

Join the overwhelming 77 percent of Americans who want to ensure federal contracts go to companies that pay living wages and benefits, and respect worker rights by reading Good Jobs Nation’s report and supporting its campaign on Facebook and Twitter.

Two Women: What I Learned from Sophia Loren

Angela Sanbrano: “A Good Organizer Is a Pain in the Butt”