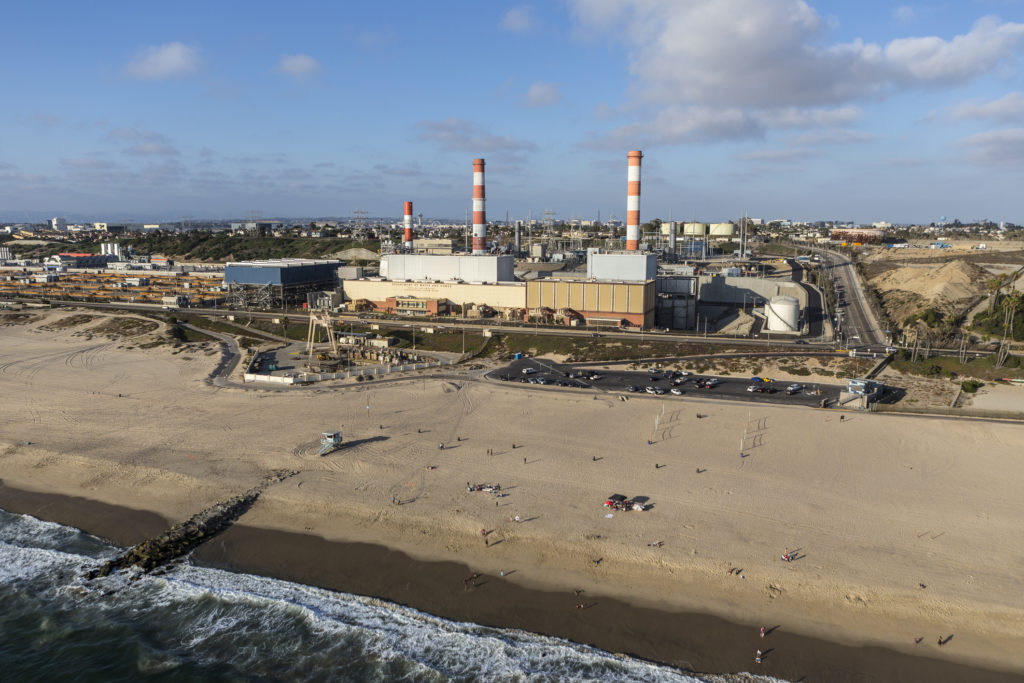 By signing into law Senate Bill 100, which sets a goal of 100 percent carbon-free electric power generation by 2045, Governor Jerry Brown not only solidified California’s ongoing transition from fossil fuels, he numbered the days of the state’s gas-fired power plants.

But some new gas plant projects are still on the table. In the South Bay of Los Angeles County three aging plants — Scattergood, Haynes and Harbor — had been slated for replacement with gas-fired generating units that don’t use ocean water. In 2009 the State Water Resources Control Board (SWRCB) required all gas-fired plants that use ocean water to cool them (called “once-through cooling plants”) to be phased out, due to the danger to aquatic organisms.

But last year the Los Angeles Department of Water and Power (LADWP) paused the rebuilding of those three plants to study whether they should continue using natural gas, at least for a few years, or could take the leap into renewable energy as soon as possible. An independent report on the consequences of not rebuilding gas-fired plants, the LADWP told Capital & Main, is due in February.

Energy watchers say it’s not a sure thing that the agency will abandon plans to rebuild these plants to use gas power, despite the state’s 2045 carbon-free mandate and L.A. Mayor Eric Garcetti’s Sustainable City Plan. One reason, experts say, is the need to protect electric reliability in this densely populated region; another, and possibly more significant one, is bureaucratic inertia.

Michael Wara, director of Stanford University’s Climate and Energy Policy Program, said that some gas plants will be needed for years to accommodate for the occasional mismatch of supply and demand when the sun isn’t shining and wind isn’t blowing.

“Location is important,” Wara said. “You can’t replace a gas plant on Santa Monica Bay with solar farms in the desert yet.”

The other reason LADWP might embrace the status quo – gas power – is the industry’s risk-averse mindset, Wara added. “Change is risky to utilities,” he said.

Evan Gillespie, Western Regional Director of the Sierra Club’s Beyond Coal campaign, said he hopes LADWP will “clearly state the problems” to the public of taking all gas power off line in the short term, but also enlist green energy companies to show the utility that battery storage for renewables, though costly now, could be cheaper in the long term.

“We want to see RFPs [requests for proposals] to test the market to see how far clean energy can go to replace these plants, rather than the DWP doing the market analysis,” Gillespie said. “I think the clean energy developer community has a penchant for more creativity and they’re inclined to turn over more stones.”

Gillespie, like Wara, said LADWP doesn’t need to retire all three plants now, and that Scattergood, which finished rebuilding one of its units last year, could “let that run for a decade or two” but that the utility should draw the line at starting construction on any more gas-fired units.

LADWP’s initial estimate for rebuilding the three gas-fired plants was $2.2 billion, with a scheduled completion of the final phase in 2029.

The Grayson Power Plant in the inland L.A. suburb of Glendale, is the fourth, and last, gas-fired power plant in the state that might be rebuilt to use fossil fuel. But renovation plans for it, too, were put on hold earlier this year, spurred by intense public pressure, so that the Glendale Water and Power utility could look at renewable alternatives.

In Northern California, Pacific Gas & Electric (PG&E) is moving headlong into renewables.  In June,  the company requested approval of four energy storage projects that would replace three gas-fired power plants it manages. The utility also plans to replace a gas plant in Oakland with batteries and multiple solar panels.

LADWP, the largest public utility in the country, could follow PG&E’s lead, Gillespie said. “Replacing two gigawatts of gas with energy storage isn’t easy [for LADWP] but it isn’t impossible.”

Responding to a question about a possible move toward renewable energy, LADWP spokesman Joseph Ramallo said in an email that the department’s planned study would provide a “detailed assessment of a comprehensive set of alternatives” to gas-powered plants and would determine how much the department could reduce natural gas while maintaining system reliability.

In the wake of the 2000-2001 energy crisis, California commissioned many natural gas plants. Wara said that for the next two decades the 200 natural gas plants connected to the grid will be decommissioned, one by one, shuttered by market forces or regulators in a game of “musical chairs.”

A recent independent analysis conducted by the Union of Concerned Scientists concluded that California could immediately retire at least 28 of the 89 natural gas plants in the California Independent System Operator (CAISO) territory without affecting the stability of the electric grid.

Related Topics:LADWPrenewable energy
Up Next