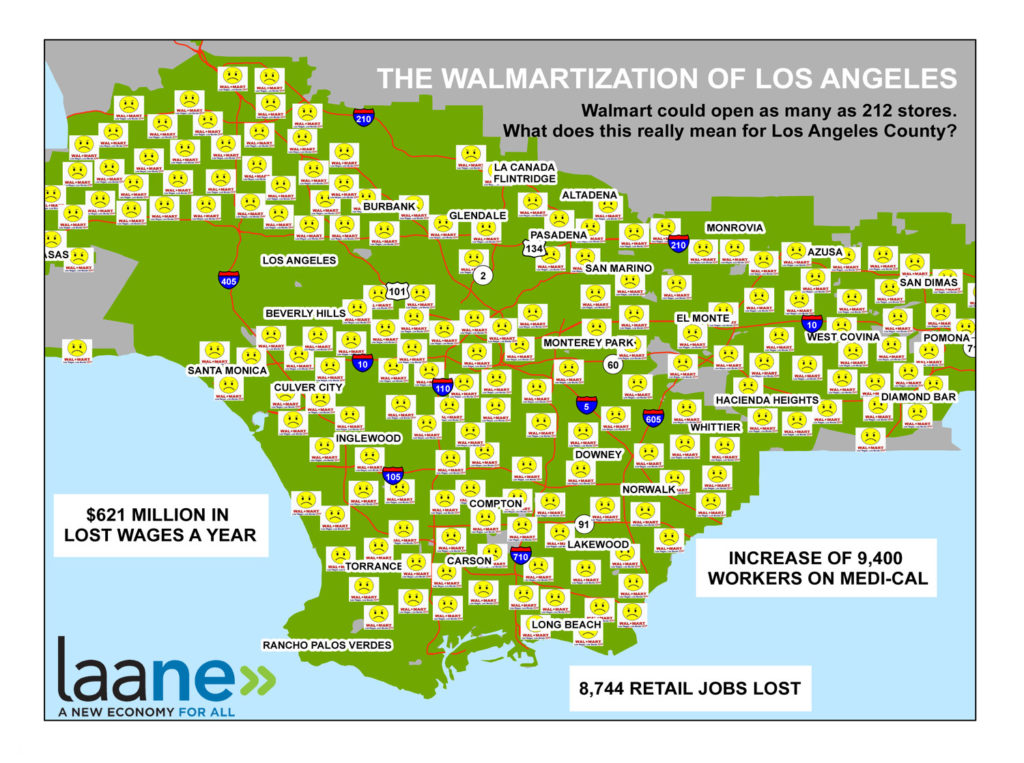 Maybe you will be one of the 10,000 people expected at a June 30th protest in L.A.’s Chinatown against a controversial plan to open a Walmart store there. The uber-retailer’s reputation for wrecking the atmosphere of historic districts like Chinatown, and posing a potential threat to local businesses, has generated strong resistance to plans for a 33,000 square-foot “express” Walmart at Cesar Chavez and Grand avenues.

The fight isn’t only about Chinatown–it’s about all of Los Angeles, because Walmart may be coming to a corner near you. Walmart has designs on locations around L.A. County to gain a foothold in the local urban grocery market.

The retailing behemoth needs to shore up sagging sales and stagnating stock prices, which requires expansion into U.S. urban markets. (Rural and suburban areas across the country have reached the Walmart saturation point.) But Walmart has encountered stubborn opposition in urban centers where residents take issue with its penchant for keeping its employees in low-wage, part-time positions — where they also suffer from scanty health care coverage.

Walmart Vice Chairman Eduardo Castro-Wright told investors in 2009 that the average potential grocery market share in 50 urban communities is “worth anywhere between $80 billion and $100 billion in retail sales.” (A New York Times article that detailed Walmart’s alleged payout of $24 million in bribes in Mexico identified Castro-Wright as “the driving force behind years of bribery.” He was promoted to VP in 2009, several years after a whistleblower alerted corporate Walmart to the pay-out schemes. The company is now under criminal investigation.)

Castro-Wright’s quote is part of an eye-opening 2011 report from the Alliance for a Greater New York (ALIGN). The Walmartization of New York City estimates that the world’s largest company owns 21 percent  of U.S. grocery markets across rural and suburban areas.

The study examines what could happen if Walmart achieved the same market share in big cities such as New York.

They figure it would mean 159 stores of varying sizes throughout New York.

The damage to New York’s economic infrastructure? Overall figures show $353 million in lost wages for retail workers (local retail wages fall by up to 0.9 percent every time a Walmart opens.)

The study also shows a loss of nearly 4,000 jobs and a $4 million taxpayer bill for health care benefits for Walmart workers who tend to rely on social services to make ends meet.

Kellerman said ALIGN’s methodology was based on analysis of Walmart expansions elsewhere. Walmart needs to open urban stores on a large scale in order to achieve the growth required to bump up the bottom line, he said–merely adding  dozens of stores would do little to increase the company’s overall worth.

So back to L.A.— how many Walmarts does it take to gain 21 percent of L.A. County’s market? The answer: 212, according to a map (shown above) prepared by the Los Angeles Alliance for a New Economy, using the methodology of the ALIGN report.

“We wanted to show that it’s a huge number of stores that would be coming to L.A. and how that’s going to transform our local landscape,” said LAANE senior policy analyst Aiha Nguyen. The LAANE map estimates the local economic damage of locating 212 Walmarts in Los Angeles County: a loss of 8,744 retail jobs, $621 million in annual lost wages and an increase of 9,400 employees using Medi-Cal.

The placement of Walmart stores on the map is not based on actual projected locations, Nguyen noted; there is no reliable information as to where Walmart is looking at sites.  Walmart will only say it has no stores to announce beyond the Chinatown site and another in Panorama City.

The city of Los Angeles has for the most part blocked Walmart with a 2004 ordinance that requires an economic impact report of retailers who plan a “Supercenter”-sized store of 100,000 square feet-plus that sells groceries.

And Walmart is regrouping. A quick check of the City of Los Angeles Ethics Commission reports shows the company made lobbying expenditures of $532,906 between 2008 and 2012. Most were for “issues related to City of Los Angeles locations” and went to Ek & Ek, a governmental consulting firm whose clients include L.A.’s Central City Association, McDonald’s and Home Depot.

It’s interesting to note that the report showed that there’s largely a gap in Walmart’s lobbying payments in L.A. between 2004 (when Walmart was fighting the accountability ordinance that has limited the ability to expand in the L.A. market) and 2006–when Walmart began making payments to the legal powerhouse Manatt, Phelps & Phillips LLP for “representation in connection with land use and planning issues.”

Walmart is clearly on the move in L.A.

Most fascinating is a payment in the first quarter if 2012 of $60,000 to Mercury Public Affairs, described by the Sacramento Business Journal as a “firm that specializes in high-stakes public strategy.”

The ethics report showed that Mercury was brought in to respond to a proposed L.A. City ordinance intended to impose a moratorium on the development of “formula retail” stores—like Walmart–in historic districts. (Last week Walmart fired Mercury after an embarrassing incident involving a Mercury representative who posed as a journalist sympathetic to Walmart workers.)

The City Council voted to approve the measure in March—even after a planning department official showed up to inform council members that Walmart’s Chinatown permits had been okayed the day before and the moratorium wouldn’t apply.

So, yes, be prepared for Walmart’s L.A. urban expansion game. It’s not only Chinatown that’s at stake.