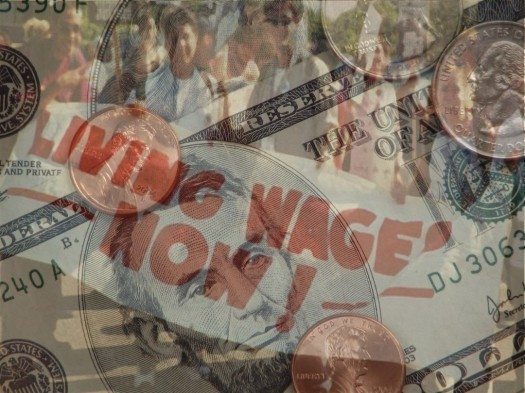 Through the years, the centerpiece of living wage campaigns has generally been a focus on fairness and economic justice for workers. And rightly so. Successful living wage campaigns have resulted in critical gains for workers and their families, bringing everything from increased economic security to improved access to quality health care. These material gains have meant a world of difference for real people and have helped lift thousands out of poverty to achieve a decent standard of living – something we all deserve, regardless of the work we do.

But a living wage is not just about improving the quality of life for individual workers — it can also be a powerful mechanism for stimulating local economies, boosting local businesses and confronting the growing problem of poverty in our communities.

A new report released this week by the Los Angeles Alliance for a New Economy (LAANE) approaches the idea of a living wage from this perspective and examines how improved wages and benefits for thousands of L.A.’s hotel workers have the potential to help bring economic renewal to our neighborhoods and our city as a whole. You can read the report here.

Among the report’s findings is that a living wage for workers in Los Angeles’ large hotels would give our local economy a boost of about $71 million per year from increased local spending and related economic activity. While the leisure and hospitality sector is one of L.A.’s largest employers, hotel workers live – and spend – throughout the city, so the report also estimates the economic activity generated by workers from every one of L.A.’s 15 City Council districts. Seventy-one million dollars is very significant economic stimulus, and more income in workers’ pockets (currently the average hotel worker earns about $1,500 per month) will not only raise the standard of living for workers and their families, but will also dramatically increase the spending power of thousands of Los Angeles residents.

That’s right – a citywide hotel living wage will actually be good for business. In fact, small businesses across the city are supporting a living wage for hotel workers because business owners know that increased wages will mean those workers will be able to reinvest that money into our local economy. And, every dollar spent in our local businesses means additional tax revenues generated for Los Angeles, which benefits us all.

The report shows how the current tourism boom in Los Angeles and a demand for thousands of additional hotel rooms in the city create the ideal conditions for establishing a living wage ordinance for L.A.’s hotel workers without harming the hotel industry or consumers. With the potential to vastly improve the lives of nearly 15,000 hotel workers and their families, and to help keep millions of dollars a year in L.A. to stimulate our local economy, a living wage for hotel workers would be a significant investment in the quality of life for all Angelenos.

Related Topics:Living Wage
Up Next