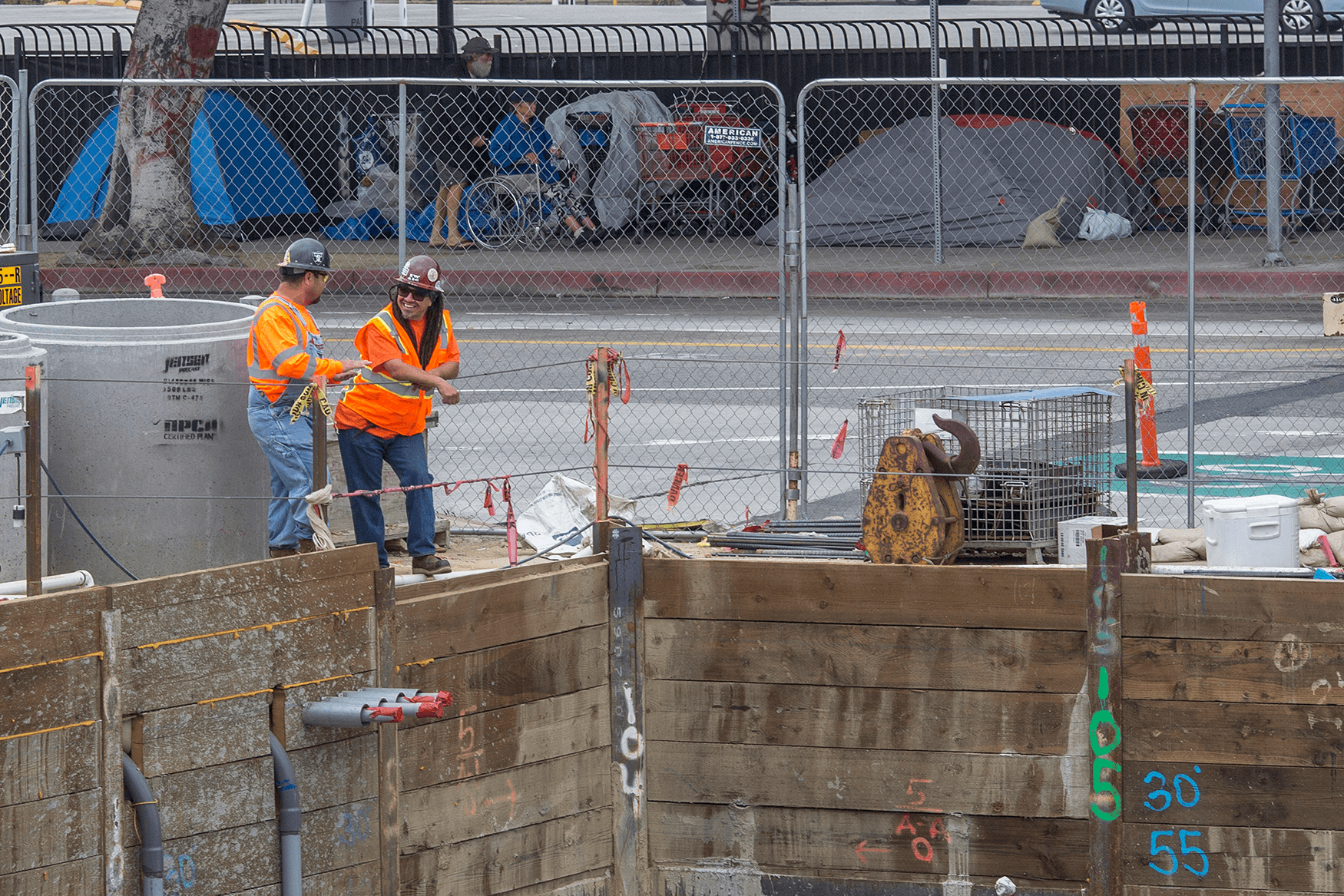 Daily life for homeless individuals is a precarious balance of competing priorities.

For someone struggling with housing insecurity, or attempting to recover from time spent living on the street, access to regular work is a “difference maker,” says Molly Moen, vice president of development and communications for Chrysalis, a homeless employment-focused nonprofit. “It allows you to stay in the apartment that you’re getting, to move your life forward,” she adds.

For 30 years Chrysalis’ programs have transitioned about 58,000 homeless people into apartments and jobs. The group supports would-be workers with professional coaching and résumé preparation services, by connecting them to partners who can provide employment and housing, and by taking care of more basic needs like clean clothes and access to hygiene products.

Moen says that daily life for homeless individuals is a precarious balance of competing priorities, and that getting a paycheck can fall off the bottom of that list if other needs aren’t met — like finding a safe place to sleep at night and having somewhere to wash clothes for the next day of work.

“When you’re at work, your employer expects work to be 100 percent of your focus,” she says. “But if work becomes something that’s distracting you from taking care of your survival, even though you know that you need to work, it can be really hard to maintain it.”

Even an understanding employer will eventually reach a point where they have to let a distracted worker go. For someone — housed or unhoused — who’s struggling to build security, job loss can predicate a downward spiral.

Homeless job seekers in Los Angeles benefit from a broad patchwork of nonprofit, and government-funded organizations and agencies.

“If you get fired because you were trying to deal with a crisis in your life, that can also be incredibly disheartening,” says Moen. “It makes you feel like, ‘Oh my gosh, I won’t be able to succeed next time because I can’t stop these crises from happening.’ It can be a huge snowball.”

That snowball’s velocity and consistency vary from person to person. For a person who sleeps on cardboard beneath the Hollywood Freeway, the snowball’s trajectory can be very different than one for someone who has a job but lost a reliable place to fall asleep each night, thereby stressing their ability to focus only on their work.

The personal decision to seek help is a crucial moment in the transition from homelessness to stable living. Once a person has made that choice, they enter the radar of the broad patchwork of nonprofit, and government-funded organizations and agencies that try to match homeless individuals with employment, housing and medical care, and try to support them through the process towards stability.

Although Los Angeles has had a large network of charity oriented organizations for decades, what’s changed in the past two years is an influx of public money earmarked specifically to mitigate homelessness. In March of 2017, L.A. County voters overwhelmingly approved Measure H, a quarter-cent sales tax increase intended to raise about $3.5 billion for homeless services over the next 10 years.

Four dozen cities in L.A. County have agreed to develop their own municipal-level homeless plans with targetable goals.

Figuring out how to effectively use the new money, says grant writer and homeless consultant Abby Arnold, who’s currently helping the City of West Hollywood formulate its homeless plan, is a work-in-progress.

Arnold says about 45 or so cities in L.A. County have signed on with the county to develop their own municipal-level homeless plans with targetable goals. But the process has been bumpy as local jurisdictions begin realizing they may have to take actions, like erecting temporary shelters, that are politically unpopular.

“People,” Arnold continues, “show up at meetings and say, ‘If we do any kind of services, if someone hands out even one sandwich, then thousands of homeless will come, and we’ll end up like Santa Monica or Venice.’ Hearing that kind of rhetoric makes me crazy.”

Even L.A. County’s Coordinated Entry System has an arduous application process that can present a barrier to the homeless who have decided they want help.

At the center of Los Angeles County’s efforts to house the homeless is the Coordinated Entry System (CES), a comprehensive “no wrong door system” intended to stitch together the county’s maze-like network of offices and agencies into a single mechanism. When elected officials talk about connecting homeless individuals to employment, mental health and housing services, they mean doing it through the CES.

However, like any assistance program tied to public money, the CES has an arduous application process that, itself, can present a barrier to the homeless who have decided they want help.

“It’s a really daunting process,” says Arnold. “You have to decide if you want to fill out all of these forms, and have your photograph taken and put into a database that can be accessed by anyone working at any homeless organization, or any police agency that had a relationship with the county. If you’re the least bit paranoid, that’s not happening.”

Working people through this byzantine administrative system falls back to the patchwork of public, private and nonprofit workers who dedicate themselves to serving the homeless every day. Different organizations have different strategies, but the ultimate goal is to build consistency, and give people time to, as one San Diego provider recently told Capital & Main, “get their head on their shoulders.”

Without a safe and reliable living situation, this is virtually impossible. If, for example, identifying documents crucial for accessing public services get lost in an encampment sweep, the bureaucratic exercise to get new copies can quickly morph into a multi-day ordeal that makes it that much harder to move forward.