“[The opposition] is often people who have interests that conflict with people living on the street,” Spiegel said. “But denying access to services doesn’t make poop go away.”

Spiegel helped lead the 2017 audit of public toilets on Skid Row and write “No Place to Go,” an influential report that explored a host of factors contributing to the dire state of sanitation in the area — from the appearance, maintenance, safety and privacy of public restrooms, to wait times, wheelchair accessibility, availability of menstrual products and public signage advertising the locations and hours of toilets. The automated toilets and porta-potties on Skid Row have long had a reputation as magnets for such crimes as drug-dealing and prostitution. They are frequently vandalized, defaced and neglected. The doors on many toilet stalls don’t lock. Homeless residents say they are afraid of being robbed in them, or worse.

Report:  Skid Row toilet accessibility only met between 10 and 23 percent of the need.

Spiegel says the lack of public health infrastructure like toilets for L.A.’s homeless is a problem that goes back some 40 years — compounded by the city’s homelessness surge in recent years.

His report applied a sanitation standard devised by the United Nations to evaluate the conditions in long-term refugee camps. It found that toilet accessibility in Skid Row met between 10 percent and 23 percent of the need — the area was 80 toilets short of the UN standard by day and by as many as 164 toilets short by night.

“Los Angeles never really had a plan or any intentions of providing full-scale access to restrooms for houseless people in Skid Row,” said Pete White, founder and executive director of Los Angeles Community Action Network (LA CAN), an anti-poverty activist group based in Skid Row.

The city of Los Angeles has taken recent steps to ameliorate the lack of bathroom access, maintaining five public toilets in Skid Row, and eight porta-potties in Gladys and San Julian parks. All of these toilets are shuttered around dusk every day.

In December, the mayor’s Office of Economic Development inaugurated a new hygiene center on a lot on Crocker Street. The Skid Row Community ReFresh Spot brought eight public toilets and six showers to the area, the first public restrooms the city had added to Skid Row in a decade.

The ReFresh Spot closed temporarily after four months for what Anna Bahr, a spokesperson for Mayor Garcetti, said was a need to expand offerings at the site and add a free laundromat with eight washers and eight dryers. Though the hygiene center was initially scheduled to reopen in the spring, the mayor’s office says the reopening has been postponed until summer.

Bahr said that a San Francisco-based nonprofit called Lava Mae is stepping into the breach to provide showers and bathrooms to Skid Row, South L.A., Venice and Manchester Square. (A spokesperson for the group said Lava Mae has been providing mobile hygiene services in Los Angeles since November 2016.) The Los Angeles Times reported the group rejected public funding, but that the city is providing municipal water hookups.

Zita Davis, executive officer for the mayor’s Office of Economic Opportunity, said that when the ReFresh Spot reopens it will operate four days a week from 6 a.m. to 1 p.m., with the goal of extending the schedule to seven days a week. Bathroom attendants employed to clean the restrooms after each use include former homeless people of Skid Row.

The city has also launched a six-month pilot with a porta-potty program from San Francisco called the Pit Stop. The program will install portable toilets at locations near homeless encampments in Venice, Exposition Park, Historic Filipinotown, the Downtown Fashion District and Wilmington. The portable toilets are delivered and removed daily for cleaning and maintenance, and open to the public 12 hours daily. 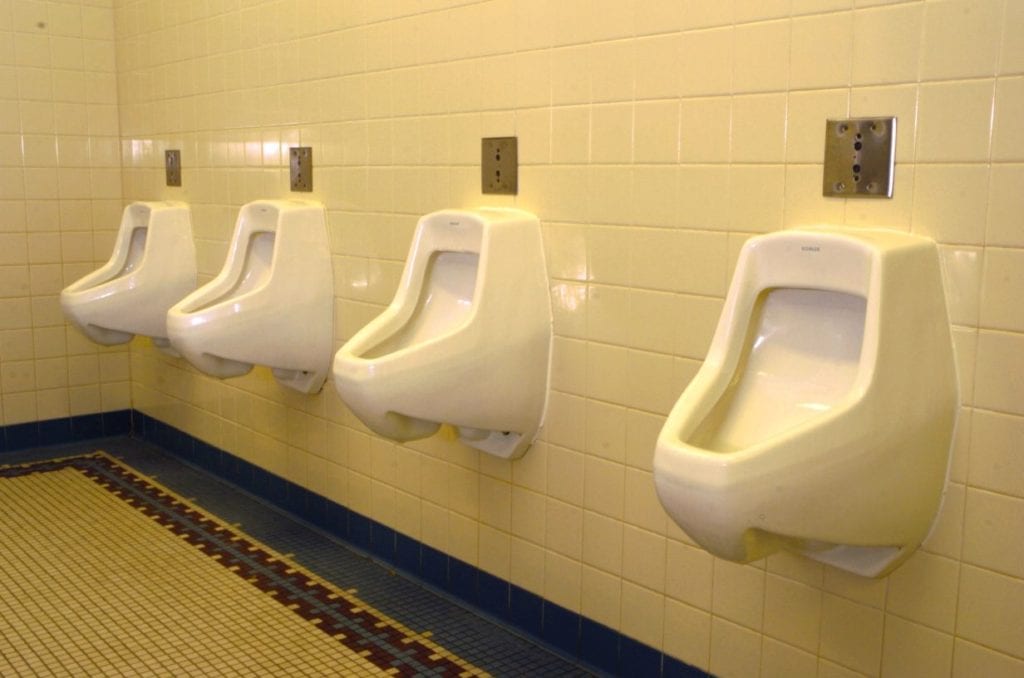 Full-time attendants wearing fluorescent green vests wipe them down, keep a watchful eye out for potential safety issues, and give each user a seven-minute courtesy knock. They use a clipboard to keep track of the number of users, which averages nearly 150 a day.

One of the attendants seated beside a cart loaded with cleaning supplies told me: “People love us out here. They compliment us because it’s clean and say if we weren’t out here they wouldn’t be able to use the bathroom.”

Rick Coca, a spokesperson for Councilman Jose Huizar, whose district includes Skid Row, said the number of bathroom stalls will be determined by the city’s Department of Recreation and Parks. “Bathroom access is about basic human dignity,” Coca said.

County health officials, Skid Row residents and long-time homelessness activists, including those who have worked with the city and mayor’s office to open the ReFresh Spot, say the city’s latest efforts only scratch the problem’s surface.

“We understand that this is not even a drop in the bucket,” said Eddie H., a veteran homeless activist with United Coalition East Prevention Project, a community-based alcohol and drug prevention program that advocated for the ReFresh Spot. “We also understand that to get to the point where we want to go we had to start somewhere.”

Living Homeless in California: Public Bathrooms and Other Mirages