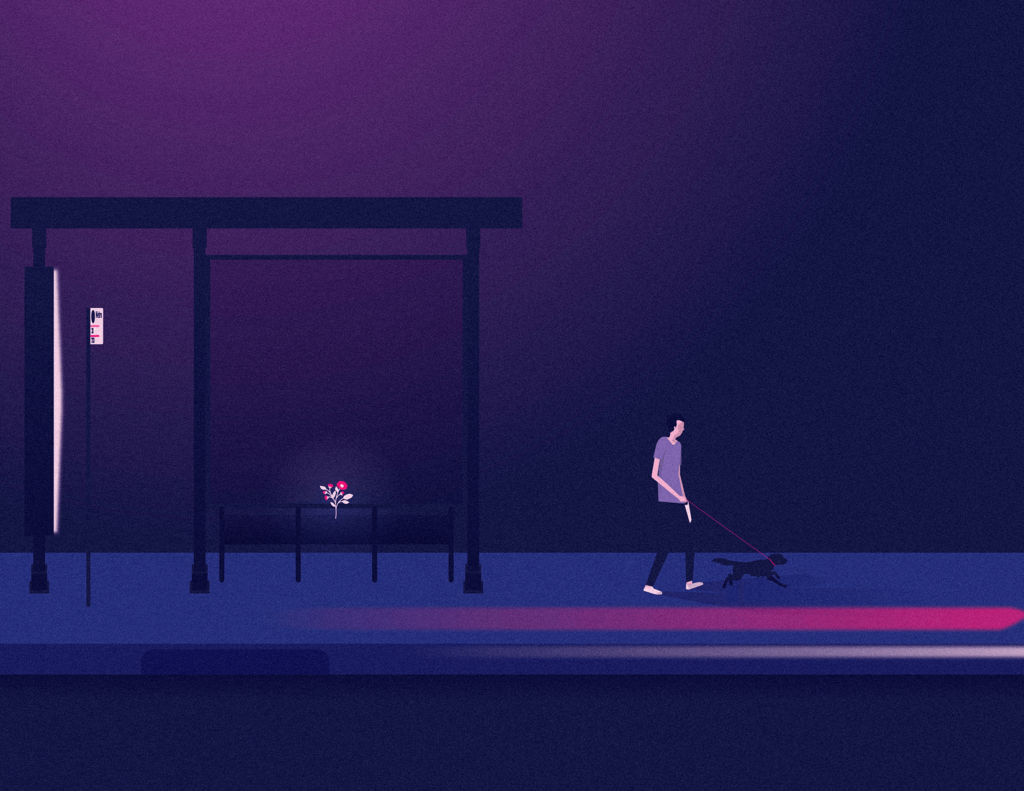 Local businesspeople were nonplussed.
One merely noted that the dead man was a “homeless dude.”

I take a walk every morning to the Whole Foods that sits on the corner of Lincoln Boulevard and Rose Avenue, four blocks from my house in Venice, California. I walk for exercise and observation. I buy a piece of fruit and return home the way I came, a 30-minute canvassing of what remains in place and at stake, and what has changed in this rapidly gentrifying community.

In four blocks I cross paths with the contradictory reality of Venice during a time of frenzied transformation. One can purchase Atlantic Hot Smoked Peppered Salmon at Whole Foods for $28.99 a pound, while across the street the popular Natural Pet store offers “anti-anxiety calming anti-aggression” “Zen Licks” for dogs who belong to people more anxious than they are.

Home prices and rents here are at astronomically high, rivaling Bel Air and the Pacific Palisades for the most expensive real estate in California.

And there are hundreds of homeless men and women living on the streets, many in semi-permanent tent enclaves, others sleeping alone and where they can. On my walk I pass two or three men that are mentally distressed and who occasionally feel threatening.

Last December I walked by a familiar bus-stop bench at the corner of Lincoln and Sunset Avenue, and saw a dead man. Police had cordoned off the area with  yellow tape, with a white tarp covering the body. Local businesspeople were nonplussed. One merely noted that the guy was a “homeless dude,” as if that kind of death is no surprise – and it isn’t — and certainly not worth mourning. The other homeless people in the neighborhood didn’t know him, and had little to say about his death, perhaps understanding that the scene is all too common in Los Angeles, with 831 other homeless men and women having preceded this man in 2017, a sizable spike from the 713 homeless who died on the streets in 2016. In 2013, the number was 458. Did those looking on also feel a slight foreboding?

Unclaimed bodies are cremated in
Boyle Heights. Unclaimed ashes end up in a common grave after two years.

Ed Winter, assistant chief of investigations at the county coroner’s department, tells us that the man was Caucasian, over 60, with no living parents and from South Carolina. He died of a heart attack. “Case 2050” has a half-sister who was afraid of him when he was a younger man and lived closer to home. He had been incarcerated a few times, and according to siblings, had been estranged from his family for at least 35 years. They want nothing to do with what’s left of him. Unclaimed bodies are cremated at the L.A. County Crematory and Cemetery in Boyle Heights. If the ashes are not claimed in two years, they end up in a common grave where all unattended bodies for the year are buried.

How the dead man ended staking out a home on a bus bench in Venice is a mystery.

How the man ended staking out a home on a bus bench in Venice is a mystery. As far as I could tell the bench was his, if longevity on a spot can be considered an ownership of some sort. During his final weeks, when I got to know his place but not him, this was a man with next to nothing in his life. He now has only a number.

During the day, he would sit up with his head bowed, trying to sleep or hide or go unnoticed and unharmed: These anti-homeless benches are designed to keep people from lying down. He pissed himself often enough, rarely showered, and the evidence of both details were clear to the senses.

In the evening he managed to tweak his body and thin blankets around the steel arms that divide the bench into quarters. His “sleep” most certainly was a twisted affair, with traffic and sirens and unwanted thoughts weaving in an out of a drink-soaked fever dream of hellish dimensions.  A nearby pepper tree, strangely, is filled with what sounds like hundreds of parakeets jabbering nonstop, adding another element of torture from a source that is designed to bring delight. My man, why pick this godforsaken corner, this punishing bench?

Under the sign of a new “gilded age,” distracted and busy as we all are, giving our attention to another human being who is at his wits end, or just his end, is difficult in the extreme.

These days, under the sign of a new “gilded age,” distracted and busy as we all are, giving our attention to another human being who is at his wits end, or just his end, is difficult in the extreme. Complaints will be made over dinner, questions asked, advice given: What can I really do? There are so many who need help. I’ll only give money to those who are providing a service — “cleaning” my windshield or busking a few songs on a corner. Finally, fatally, as if an echo from 19th-century London: Are there no workhouses, is there not some slight provision for the poor and destitute? Someone must be doing something. Catastrophic, large-scale disasters bring out the best in us; ugly, slow-moving ones, not so much.

Of course, some people and institutions and a few elected officials are trying to help, doing honorable work, with funds raised for low-cost housing, shelters, mental health and addiction care. But in general, the commons seems overdrawn on its ethical accounts, if the neglect of these people over many decades counts as evidence for such a claim. And some will ask, in the language of behavioral economics: Was this man, who likely had chosen his fate, a “free rider” after all? Sure, build low-cost housing for the homeless, but please not near my increasingly valuable house. Across Venice, this conversation is taking place as I write, with many wanting to leave the city of Los Angeles (a “Vexit”), so as not to be subject to the decisions of the city council when it comes to the homeless question.

A homeless man who falls dead off a bus bench onto Lincoln Blvd. at 7 in the morning might not be worthy of any local poet’s attention, but we most certainly need a few poets in these precincts to document such harrowing events. Unclaimed and now a statistic, he is an anecdote to be passed around among friends and neighbors, a silent and now archived body and testimony to our time in paradise. As for this unlovely and unloved man, even a kind burial will have to wait until that common grave opens up, two years hence.

Living Homeless in California: Can Washing Up Transform Lives?