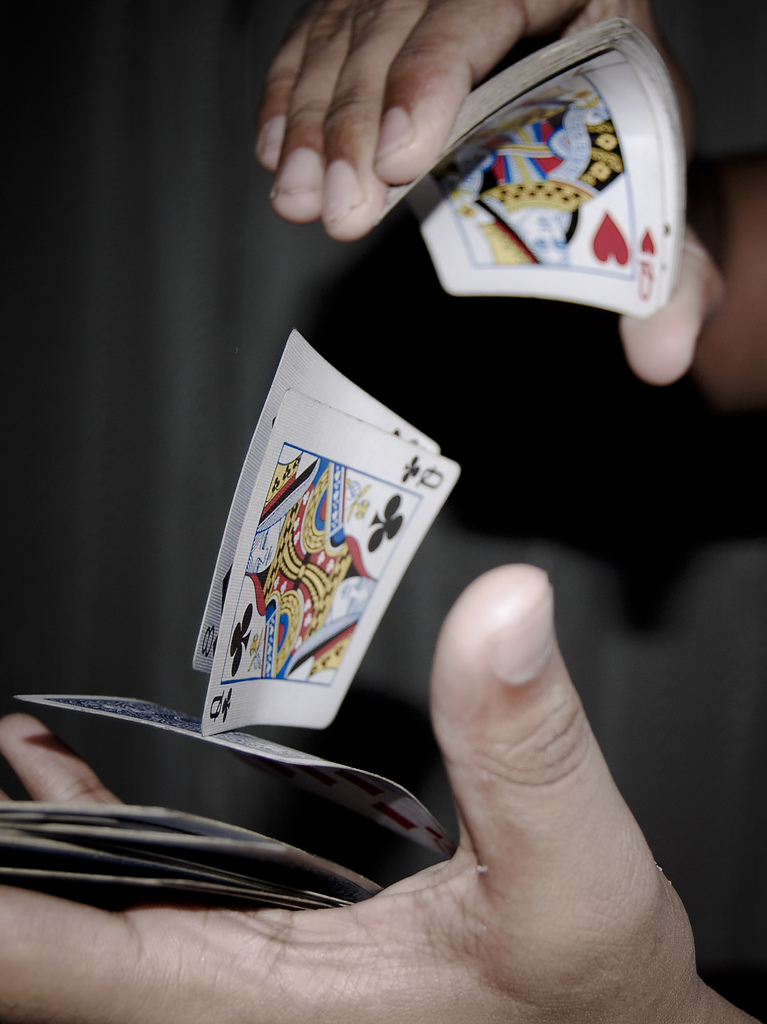 I am particularly fond of Kenny Rogers’ song “The Gambler.”  At a recent hearing for the Los Angeles City Council Ad Hoc Committee on Waste Reduction and Recycling, I kept thinking about this song as I heard many business groups and trade associations lobby against true reform of L.A.’s waste collection system.

The debate stems from how the City of L.A. should reform its system for dealing with waste at businesses and large apartment buildings.  On one end, you have the Don’t Waste L.A. coalition, to which I belong through the Natural Resources Defense Council. It is a broad coalition of environmental, community, faith-based, economic justice and labor groups, advocating for a comprehensive solution to dealing with L.A.’s waste woes, instead of kicking the can down the road.  You can read more about the coalition’s positions here and here.  On the other hand, some business lobbying groups and trade associations are advocating for a system that keeps the status quo in place.

In fact, these business groups have formed a new alliance called ACE — Angelenos for a Clean Environment.  I had a hard time figuring out what was more strange about the group’s name, the playing card reference in the acronym or the fact that they chose an alliance that sounds more like an environmental group, instead of a conglomeration of trade groups.  But after digesting their unsupported and weak positions on waste in Los Angeles, they probably should have chosen a name that conjures up images of the two of clubs, instead of the powerful ace.

At an ad hoc hearing of the City Council last week, the business group ACE vociferously argued against reforming the city’s system for dealing with waste at businesses and apartment buildings.  During this testimony I kept thinking of the following verse of the Gambler:  “So if you don’t mind my sayin’, I can see you’re out of aces. For a taste of your whiskey, I’ll give you some advice.”  Heck, to the business associations in ACE, I will give you some advice without the taste of whiskey. Your position on the City of Los Angeles’ future changes to the waste system is antiquated and actually not good for those Angelenos who want a clean environment.

Over the last half year, I’ve been attending public hearings with the Don’t Waste L.A. coalition to testify about the importance of creating a more rational, less polluting system for hauling away recycling and waste from large apartment and commercial buildings in Los Angeles.  The environmental groups in Don’t Waste L.A., like the Sierra Club, the Coalition for Clean Air, and my own NRDC, signed on because we believe that a strong franchise system is key to protecting the environment from the weaknesses of the status quo. Right now, you can have many different hauling companies serving the same city block – that means many times the impact on traffic, air pollution and city streets.

With the strong franchise system sought by Don’t Waste L.A., we’ll not only reduce unnecessary trash truck trips, but we’ll be able to hold the franchisee accountable for maximizing recycling in a way that’s just not possible under the status quo.  And, maximizing recycling is not only good for the environment through reduced air pollution and need for space-hogging landfills, but it also is good for job creation.  For every one job in a landfill, there are 10 jobs created through recycling, and even more job creation can happen through reuse of materials. If the city is serious about meeting its zero-waste goals, it needs to follow the requests from the Don’t Waste L.A. coalition

By contrast, the business group ACE testifies at hearings in favor of maintaining the low-road status quo.  The ACE position does nothing to eliminate high-impact trucks and inefficient routes. The ACE position does nothing to create accountability for our waste haulers. What’s even more confusing is their arguments have virtually never even addressed the environmental impact of the status quo – they mostly complain that big business and large property owners have sweet deals with their haulers, and they don’t want to lose them.  There is too much at stake to allow these big business deals deter the city from real reform of its waste system.  And the city surely should not let a business group that claims it is for a “clean environment” thwart real and necessary change.

In the end, “You gotta know when to hold them, know when to fold them. Know when to walk away and know when to run.”  Given the lack of merit to ACE’s arguments, I suggest the business associations that formed this group fold their opposition to necessary reform of L.A.’s  waste system.  Their unsupported arguments in favor of the status quo are not the kind of leadership needed in this time of environmental challenges and lack of jobs.  The Don’t Waste L.A. coalition has done and continues to do its research on the issues, and the conclusion is that an exclusive franchise system with strong standards is really what residents of L.A. need, instead of gambling on the same old system that got us into this mess in the first place.