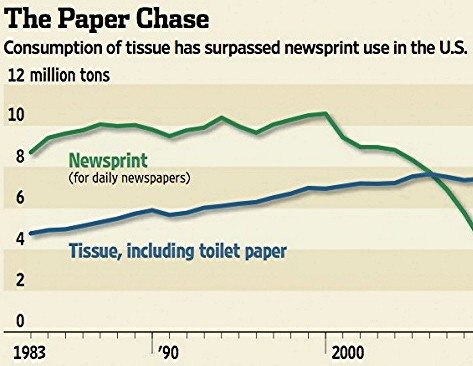 Maybe you’ve heard that we’re now using more trees for toilet paper than for newsprint. (Not least because the newspaper industry is even more in the toilet than toilet paper.) But did you know that because of Americans’ demand for super-soft TP for our bungholes, 98 percent of the pulp used to make the stuff comes from virgin wood?

“Future generations are going to look at the way we make toilet paper as one of the greatest excesses of our age. Making toilet paper from virgin wood is a lot worse than driving Hummers in terms of global warming pollution,” Allen Hershkowitz, a senior scientist at the Natural Resources Defence Council, told the Guardian.

More toilet paper used to be made out of recycled office paper, but now that offices are going paperless, there’s less of the really high quality recyclable paper — the kind with the long fibers — to go around, notes Keira Butler in Mother Jones.

The average American uses 23.6 rolls of toilet paper a year — that’s about 7 billion rolls for the country. If a single eucalyptus tree yields 1,000 rolls, we’re wiping our asses with 7 million eucalyptus trees.

The solution is straightforward: Do away with TP. Think that sounds unsanitary? Not as unsanitary as our current approach. This is how a friend put it: What if I pooped on your arm and you wiped it off with a paper towel. Is it clean now?

There’s nothing even weird about the idea — lots of cultures don’t share our freakish obsession with sticking paper up our bums. The French invented the bidet in 1710. Unfortunately, it looks as if this one of those things, like the metric system, where we’ll just never catch up: A recent survey revealed that while Americans are concerned about the environmental impact of their paper use, only 6 percent of them are willing to consider reducing their consumption of toilet paper.

Update: Uh, we missed an update at the bottom of the Guardian article, changing “virgin forests” to “virgin wood,” which is different — it includes wood from planted forests.

Christopher Mims’ dystopian non-fiction is sought after by an ever-growing roster of publications.

DWP’s Power Struggle and the Future of LA