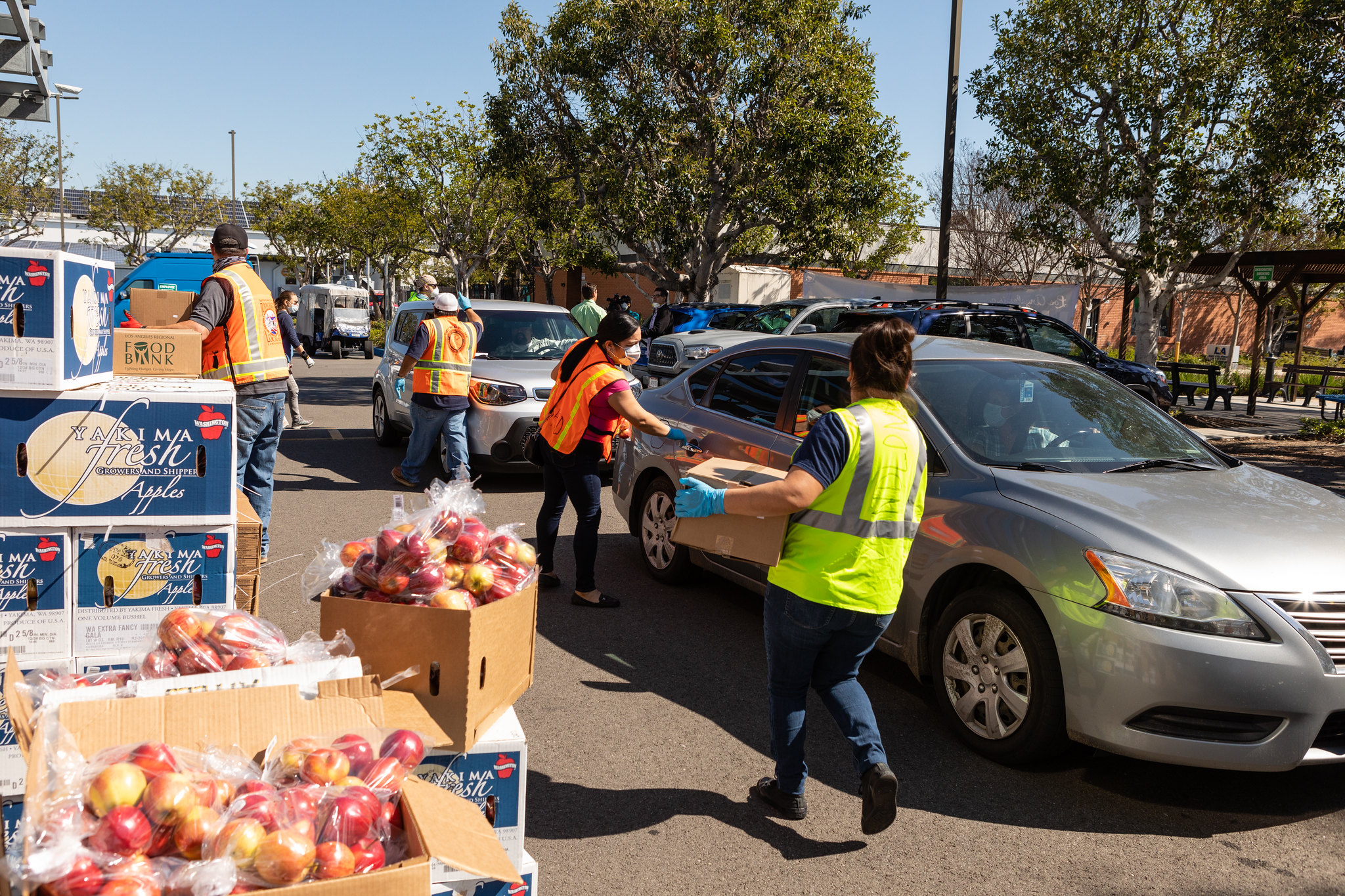 When William Dudley “Big Bill” Haywood — future secretary-treasurer of the Western Federation of Miners and thorn in the side of mine owners west of the American Rockies — suffered a broken hand while working as a miner in Silver City, Idaho, near the turn of the 20th century, fellow miners raised money to support his family while he was unable to work. That was an example of “mutual aid,” an old-fashioned term to describe a kind of safety net that unions provided for their members.

Mutual aid has showed up bigtime in Los Angeles during the COVID pandemic. The Los Angeles County Federation of Labor was pushed into action, as President Ron Herrera explains it. “Mutual aid was something that unions were founded on.” On March 31, some 1,600 union members will meet at the Westin Bonaventure Hotel to connect or reconnect with a mutual aid infrastructure — food, health care, rental assistance — hastily set up by the Federation during the height of the pandemic. At the assembly, dubbed the Workers Congress, the Federation will announce an ambitious new initiative to make mutual aid a permanent part of L.A.’s labor movement. The People’s Project, funded with a $20 million grant from the state of California, initially seeks to reach 30,000 families, with rank-and-file workers leading the outreach, and eventually up to 2 million people in need.

Capital & Main spoke with Herrera about responding to the COVID crisis and his effort to make L.A. a model for supporting labor and communities throughout the United States as the uncertainty of COVID persists.

Capital & Main: The L.A. County Federation of Labor has a plan to build a mutual aid strategy and training center. What does that even mean?

Ron Herrera: We actually got forced into having one without it being officially named that. A couple of months after I was elected at the Federation — bam, we get hit with a pandemic. Thirty thousand housekeepers and hospitality workers are laid off. Airport workers, janitorial staff, all union members, laid off.

The Federation went into action through one of its nonprofits, Labor Community Services. It wasn’t functional at the time, but we got it up and rolling right away. We created a mutual aid center without knowing it was a mutual aid center because we were just helping union people that were laid off. We’ve had something like 180 food distributions, 700,000 people fed, we’ve distributed a few hundred thousand masks, paid utilities, did rental assistance.

During the height of the pandemic, where our office is in Pico Union, the infection rate was the highest in L.A. So we started doing testing on site and then it evolved to vaccinations and now boosters.

“The pandemic peeled back the onion to problems that existed, that weren’t talked about. And it exposed companies that didn’t prioritize safety within the workplace.”

Over what period of time and where were the distributions of food, tests, vaccines?

Everywhere in L.A. County. We fed close to 8,000 people at the Forum. We were at the Coliseum, at community centers, at schools, at union halls.

With that said, we wanted to create a department, a division, in the L.A. County Federation of Labor. This is our version of expanding what we did on the ground. The first part of what we want to do is go out to the neighborhoods and actually see, post pandemic, what the economic need is in our communities.

So it wasn’t just union workers that benefited from food distribution or COVID tests?

We reached out to the community, all classes of workers. Our mission was, with union volunteers, to be at the forefront of community benefit, union membership or not. We were there for the community.

We’re thinking out of the box. Our goal is to reach 50% of the population in L.A. County. I don’t think anybody has ever done anything so grand.

“My grandfather died of miners’ consumption at 33. The community helped my grandma house her six kids. That home saved my grandmother.”

How does a mutual aid strategy work — do people work in their neighborhoods to establish a local structure and how do you reach all those people?

We are going to blanket the county. We’ve already started training organizers to be out in the field. It’ll be the old-style get out there and knock on doors. We have a two-year program set to achieve this goal. We want to make sure that people in need are still able to get essential benefits from labor.

The pandemic peeled back the onion to problems that existed, that weren’t talked about. The pandemic just amplified what was going on in brown and Black communities — the need for health care, rental assistance, the homeless issue — and multigenerational residents were being infected because workers had to go to work. And it exposed companies that didn’t prioritize safety within the workplace.

We want labor to be in the forefront of building a model of community care. And we don’t want to do it through charity. We definitely want to do it as a community partner and build solidarity around the need for care.

During the 1890s Big Bill Haywood’s hand was crushed in a mining accident, and his fellow miners provided financial support while he was out of work.

Yes, the mine workers are famous for it. My family comes from the United Mine Workers in Arizona. Because mining was so dangerous, they would bury their members at cost to the fund, not the family.

My grandfather died of miners’ consumption at 33. The community helped my grandma house her six kids. That home saved my grandmother — and my mom and her brothers and sisters. So we’re not pretending like we thought of it. We’re just going back to basics. We’re going back to outreach and goodwill from labor institutions into the community, a community of need.

Labor has to expand beyond a narrow vision of bargaining into the community, into social and economic justice.

“We’re at what, 6% to 9% union density? That has to change. And the only way it’s going to change is if you expose the good that we can do for workers.”

Where will this mutual aid training center be located and when will it open?

We got it started already, but it won’t be at the Federation, it’ll be at a neighboring office. I want to have a one-stop academy where there’s workforce support, labor community services, civic engagement, everything. Because I think that it’ll empower Los Angeles to know this is the powerhouse, this is the base, this is the foundation. Everything happens right here. And I think that it’s almost a merging of all the different expertise to create a movement. If the labor movement can do that, I think the labor movement will thrive. We’re at what, 6% to 9% union density? That has to change. And the only way it’s going to change is if you expose the good that we can do for workers.

Who pays for all this?

The California Workforce Development Board reached out because of our reputation. They knew we could get things done.