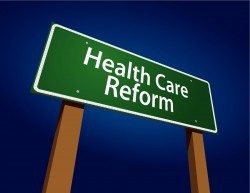 The headlines – “Many States Say ‘No’ to Health Insurance Exchanges,” to take one example – make it seem like bad news. But it’s not. It is good news that half the states are refusing to have anything to do with the new health insurance marketplaces being set up under the Affordable Care Act.

One of the biggest differences between the good version of ObamaCare passed by the House and the mediocre Senate version that became law was the question of whether the federal government or states would run the new health insurance marketplaces (called “exchanges” in the law). But resistance by Republican governors is leading to implementation of the law in a way that is much closer to the vision in the House bill.

The new health marketplaces are the centerpiece of ObamaCare, the mechanisms through which people who don’t get health coverage at work but make too much for Medicaid will be able to purchase subsidized health coverage, even if they have a pre-existing condition. The marketplaces, which are projected to cover 12 million people in 2012 and 29 million by 2021, will also offer more affordable insurance plans to small businesses.

The House legislation would have had the federal government run the marketplaces while allowing states the option of taking over if they could demonstrate the ability to do at least as good a job. Consumer advocates hoped that the result would be a good national marketplace, with some exemplary states demonstrating how to do an even better job at providing quality coverage and good access while controlling costs.

But the Senate legislation, which became law, gave the primary responsibility to each state to set up a marketplace, with the federal government as backup. Advocates were not pleased for two reasons. The first was a concern that states would do a very minimal job of protecting consumers. The second worry was that states would fumble the complicated task of getting the exchanges up and running by October 1, 2013, when they are open for enrollment.

In reality, the reluctance of so many Republican governors to cooperate with ObamaCare has led to the creation of a system that looks more like the House bill. The federal government will run the exchanges in 25 states and will have primary responsibility, in partnership with states, in seven more.

The last thing consumers needed was for governors who want the ACA to fail – like Florida’s Rick Scott and Texas’s Rick Perry – to be in charge of the law’s implementation. We can be sure that governors in these states would do the minimum amount under the law to sign people up or to protect consumers from high-priced, poor-quality health insurance plans.

On the other hand, some of the states that have decided to set up their own marketplaces are doing what the authors of the House law hoped: being models. Massachusetts, which has been running a marketplace since 2007, is the trailblazer. The state did an excellent job promoting health care coverage and making it easy to sign up, either online or in person. There are strict conflict-of-interest protections for the individuals who govern the marketplace. And they have only contracted with health insurance providers, including community providers, that offer quality coverage at a reasonable cost. As a result, premium inflation has been low.

Several states look like they will follow the Massachusetts example, including California, Connecticut, the District of Columbia, Oregon, Rhode Island, and Vermont (which is moving toward a single-payer plan in 2017). If these states prove successful in demonstrating that acting on behalf of individuals and small businesses results in better access at lower costs, the example is likely to be followed by other states and the federal government.

The open question is how good a job the Federal Department of Health and Human Services will do running the marketplaces in 32 states. This year, HHS is setting its sights on the essentials. The top priority – no small challenge – is getting up and running by October 1, when people and small businesses can start enrolling. Setting up online systems that account for the different plans and the varying Medicaid and Child Health Insurance eligibility rules in each state is daunting. Enrollment will only be available online, and plans will be easy to compare. However, there will be contracts with state-based groups to assist with outreach and enrollment. The feds say they will pay at least some attention to assuring that community health centers are included as providers by some insurers.

For now, HHS is not implementing key measures to assure that quality health insurance is provided at the best possible cost. It has decided to wait four years until all health insurance plans must be fully accredited by quality assurance bodies. More significantly, it will not initially use its biggest tool, restricting access to the marketplaces to health insurance plans that meet quality standards at a reasonable cost. Most people in the health exchanges will have their costs capped at a percentage of their income, with the government picking up the difference. So limiting insurance plans to those that provide good value will be essential to keeping the system affordable to the government and resisting pressure to increase the cost to consumers.

This October, three and a half years after the ACA was passed, consumers will start enrolling in the new marketplaces. At that point, the debate about ObamaCare will shift from theory to practice. It is vitally important that people learn about the new marketplaces and can readily comparison shop and qualify for income-based subsidies for coverage. There will be huge headaches in the process. But there will be a lot fewer problems than if every state in the union was doing this on its own. It’s good to have one instance where opposition to ObamaCare from the right is all for the best.

(Richard Kirsch is a Senior Fellow at the Roosevelt Institute, a Senior Adviser to USAction, and the author of Fighting for Our Health. His NextNewDeal post is republished with permission.)