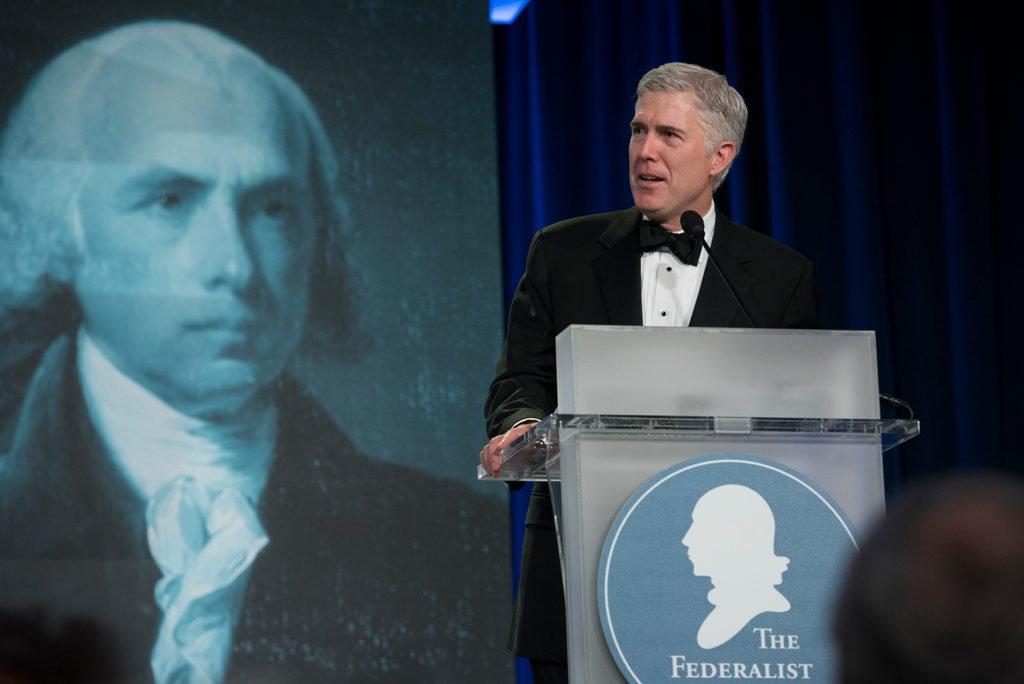 In the fall of 2015, the Federalist Society, a conservative legal organization with a libertarian bent, held its annual lawyers convention at the Mayflower Hotel in Washington, DC. The three-day event included a panel that reviewed the past decade of the John Roberts court, and featured Michael Carvin, a high-powered attorney with Jones Day, who in recent years has taken the fight against labor unions to the Supreme Court.

Carvin began his remarks, curiously, by downplaying the chief justice. “The real consequential thing that happened 10 years ago, frankly, was not John Roberts replacing Chief Justice Rehnquist,” he told the crowd. Instead, he argued, the dramatic shift had been the replacement of Sandra Day O’Connor by Samuel Alito.

There was a lot that Carvin and Alito had in common. Both were members of the Federalist Society—Alito had joined in 1983, a year after it was founded; Carvin has served as the chairman of the Society’s Civil Rights Practice Group. The men also had worked together at the Justice Department during the Reagan administration. In 2006, when George W. Bush nominated Alito to the Supreme Court, it was Carvin who repeatedly stood up for his former colleague’s far-right views. Carvin even went so far as to defend him when the Wall Street Journal revealed that Alito, when applying for the Reagan position, had written that he disagreed with the Supreme Court decision that had established the “one person, one vote” doctrine as the framework for American elections.

At the Mayflower Hotel, Carvin argued that Alito represented “some baby steps toward the return of law.” Just two months later, Carvin was in front of Alito and the eight other justices, arguing a case, Friedrichs v. California Teachers Association, that sought to strip public sector unions from “fair share” fees they collected to represent workers who declined to join the union. (By law, a union must represent all workers in a bargaining unit, whether or not they choose to join. It was a far-reaching case that could cripple the power of unions, and would represent the crowning achievement of a conservative movement that had been decades in the making. Disclosure: The California Teachers Association is a financial supporter of this website.)

In a unanimous 2009 decision, the court reaffirmed a 1977 case, Abood v. the Detroit Board of Education, which had ruled that unions could charge such fees. But the ascent of Alito had helped shift the court in a vehemently anti-union direction, and it was widely expected to rule against the unions in Friedrichs. Then Antonin Scalia suddenly died, and the court deadlocked, four-to-four. The reprieve was only temporary, however. In February, the Supreme Court heard a similar case, Janus v. AFSCME Council 31, and with its newest addition, Neil Gorsuch, the court is poised to reverse a precedent that has endured for more than 40 years.

“Here we have the Supreme Court setting an agenda, and very openly—blatantly, you might say—setting out to achieve it,” says Linda Greenhouse, who covered the Supreme Court for the New York Times for three decades, and now teaches at Yale Law School. “It’s a real unusual tale.”

The Supreme Court’s transformation into an anti-union institution runs directly through Alito, a 68-year-old from New Jersey who graduated from Yale Law School. He worked as assistant to the solicitor general in the Reagan administration, landing the post in August 1981, the same month Reagan broke the air traffic controllers’ strike. Two years later, he would join the Federalist Society, which was co-founded by another Yale law student, Steven Calabresi, who would eventually clerk for the group’s first faculty adviser, Antonin Scalia.

Members of the Federalist Society believed that “activist jurisprudence” posed a serious threat to democracy, as then-Attorney General Edmund Meese III told the group in a fiery 1985 speech. Conservative ideologues found a home in the Reagan administration; aside from Alito, Federalist Society members in the administration included the future Chief Justice Roberts and Clarence Thomas.

Alongside its rhetoric against big government, society members have consistently attacked labor unions. One Federalist Society newsletter from 1996 complained about the “increased radicalism of Big Labor officials,” and called the requirement that workers pay fees to cover collective bargaining costs a “tyranny of the minority.”

There is little to indicate that Alito doesn’t share such views. He was nominated to the Third Circuit Court of Appeals in 1990 and held the position for 15 years. At the Third Circuit, Alito consistently ruled against working people and unions. In one case, in a minority dissent, he argued that a group of reporters weren’t covered by the overtime compensation requirements of the Fair Labor Standards Act. In another, he reversed a National Labor Relations Board ruling that a company had violated the law because it had refused to rehire an employee who engaged in union activities. (Alito did admit, however, that there was solid evidence the company had threatened union activists with firings and plant closures.)

On the Supreme Court, Alito has made it clear that he relishes the chance to overthrow Abood. In a 2014 decision in Harris v. Quinn that further eroded the right of public sector unions to charge “fair share fees,” he wrote in a majority opinion that the Abood decision rested on “questionable foundations,” all but inviting a new challenge.

Justice Anthony Kennedy has joined Alito in his anti-union crusade. In 1999, Bill Moyers interviewed Kennedy who spoke about the importance of neutrality on PBS’ Frontline. “Our system presumes that there are certain principles that are more important than the temper of the times,” he told Moyers. “And you must have a judge who is detached, who is independent, who is fair…That’s the meaning of neutrality.”

Those are not the attributes Kennedy has demonstrated on the bench when the topic has turned to public sector unions.

Union attorney David Frederick argued during Janus that the current arrangement allows for unions to truly represent all workers, and that the state and the union had an interest in a stable partnership—essentially echoing the “labor peace” logic that was cited in Abood. Kennedy jumped at this notion, and went into a rant.

“It can be a partner with you in advocating for a greater size workforce, against privatization, against merit promotion, against—first teacher tenure, for higher wages, for massive government, for increasing bonded indebtedness, for increasing taxes? That’s—that’s the interest the state has?”

Frederick had said no such thing, but the exchange illustrated Kennedy’s lack of detachment on the issue of public sector unions. Later in the oral argument, Kennedy returned to a political talking point. “I’m asking you whether or not in your view, if you do not prevail in this case, the unions will have less political influence; yes or no?” After Frederick acknowledged that they would have less influence, Kennedy retorted, “Isn’t that the end of this case?”

“It is not the end of the case, Your Honor, because that is not the question,” Frederick replied. It was clear that Kennedy was not only thinking about the constitutionality of the case, but its political consequences—that he was caught up in the “temper of the time,” exactly as he had once counseled against.

Before the confirmation of Neil Gorsuch, the Federalist Society had been instrumental in securing the nominations of two justices, Roberts and Alito. Roberts, during his confirmation hearings, had emphasized his respect for precedent, noting that reversing earlier rulings was a “jolt to the legal system” and that it was “not enough that you may think the prior decision was wrongly decided.” Instead, he testified that it depended on considerations like whether the ruling had “proven to be unworkable.” In 20 states, plus Washington, DC, laws allow for collective bargaining agreements that compel employees who decline to join unions to pay agency fees. The other “right to work” states do not compel employees to do so. Both arrangements have proven workable.

During the Janus argument, Gorsuch remained silent, but on the Tenth Circuit he amassed a significant history of anti-worker rulings. In a minority dissent in Compass Environmental v. OSHRC (2011), he argued against a $5,500 fine placed on a mining-construction company after an employee who hadn’t received proper safety training was killed. In another minority dissent, he ruled against the Labor Department, which had determined that a driver was unlawfully fired after he had detached his truck from his broken-down trailer and driven away, fearing that he could freeze to death had he remained. And in May, he wrote the majority opinion for Epic Systems v. Lewis, which effectively allows employers to force workers to sign away their rights to class action lawsuits for wage and hour claims.

With that sort of history, it appears all but certain that Gorsuch will side with Alito. Indeed, last September, just hours before the Supreme Court announced it would hear Janus v. AFSCME, Gorsuch gave a speech at Trump International Hotel in DC, at a “Defending Freedom” luncheon hosted by the Fund for American Studies. One fund supporter, the Bradley Foundation, also sponsored that evening’s gala to celebrate the Fund’s 50th anniversary. The Bradley Foundation is a conservative group that “supports organizations and projects that reduce the size and power of public sector unions.” It helped fund the Janus case, along with other recent anti-union litigation the Supreme Court has heard.

“He spoke in front of a group at a hotel, and the group is supported by the same folks who are party to a lawsuit he will be hearing,” says Gabe Roth, executive director of Fix the Court, which pushes for greater Supreme Court openness and was critical of Gorsuch’s decision to speak at the luncheon.

Organizations like the Bradley Foundation, State Policy Network and Illinois Policy Institute have been waging anti-union campaigns at the state level, where they have had some notable successes in moving legislatures and governors to adopt right-to-work laws. But there are still many states, like California and New York, whose voters and politicians have resisted this trend. However, stacking the Supreme Court with anti-union justices has allowed the movement to circumvent, and undercut, pro-union state policies.

“They’re going to do what they can to use the First Amendment to cut the legs out from under unions in the public sector,” concludes Greenhouse. “It seems to me it puts the court in a very vulnerable position of looking like a lot of politicians in robes that are doing what politicians can’t.”