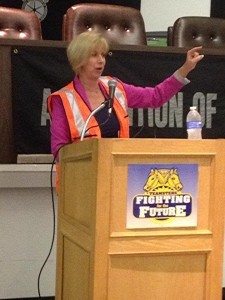 The twin harbors at the Ports of Los Angeles and Long Beach handle 40 percent of the nation’s imported cargo and generate some of the best middle-class jobs in Southern California. And yet it would be a serious mistake to believe that all who work in the transportation of goods share in the bounty provided by port traffic.

Writing in today’s Los Angeles Times, Congresswoman Janice Hahn notes that “many of the truck drivers who serve the ports find themselves stuck at the bottom of the economic ladder because of the way their employers classify and exploit them.”

The drivers Hahn speaks of are mostly immigrant workers employed by companies who label them as “independent contracts” — a ploy that enables the companies to deduct their own trucking-related business expenses from their drivers’ wages. Hahn recalls speaking to drivers who have told her that, under this system, earnings from the first 30 to 40 hours of their work weeks are absorbed by truck costs – only after that length of time do they begin to keep their earnings.

Hahn notes that the local trucking industry continues to resist classifying their drivers as company employees, even in the face of ruling after ruling made in the drivers’ favor by the California Labor Commission.

Like many other industries, including those employing retail store clerks and fast-food workers, the transportation business cites the soft economy and the supposedly higher consumer prices the public will pay for goods and services, should their employees be given the slightest wage increases and improvements of their working conditions. Hahn shoots this myth down with the facts:

. . . consumers don’t need to worry that the improvements for truckers will raise prices in stores: Providing a living wage for port drivers can be done for a fraction of a penny on the price of a new pair of sneakers.

She also points out how workers at the Toll Group, a local port trucking firm headquartered thousands of miles away in Australia, organized a Teamster local here without the world ending – in fact, the drivers won a $6 and hour raise, plus health care, overtime and retirement benefits, and Toll is still a transportation powerhouse. To Hahn and others, that sounds like a pretty good deal.

Thanksgiving and the Working Poor