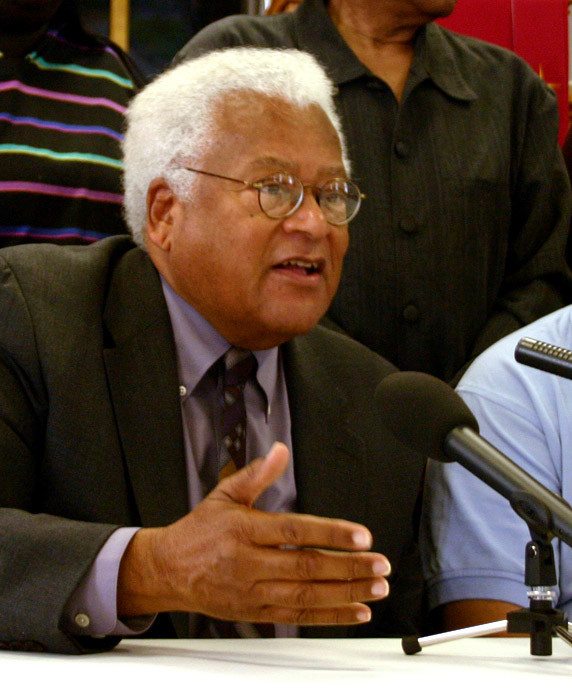 Civil rights leader Reverend James Lawson announced last Saturday that he’s planning to give himself to a new nonviolent direct action campaign with the Children’s Defense Fund, but wasn’t ready yet to discuss the details. The setting was his monthly workshop on the theory of nonviolence, where upwards of 35 people of diverse ages and backgrounds were gathered to hear Lawson present his provocative thoughts on basic human values, spirituality and the need for systemic social change.

Credited with introducing nonviolent direct action to the 1960s civil rights movement, Rev. Lawson feels the theory of nonviolence has had the equivalent impact on our understanding of the universe as Einstein’s theory of relativity. He sees the recent growth of California’s labor movement as an outgrowth of what Lawson calls “this science of social change” introduced to the state by farm worker leader Cesar Chavez in the 1960s and 70s.

Lawson was dressed last weekend in pressed khaki slacks, a blue Oxford shirt and blue blazer, gray running shoes, his head crowned with a helmet of gloriously white curly hair. He opens each workshop with some themes he’s been ruminating upon, and invites a give-and-take discussion with those attending.

Lawson is now in his eighties and still exudes the energy, excitement and urgency he feels about the need to save our country and our world from the scourge of profit-driven violence.

The time for protest is over Lawson declared – protest and electoral politics are no longer adequate to bring about the change we want. What is needed, he said, is systematic, strategic planning.

Rev. Lawson believes that imparting nonviolent strategy and philosophy prepares the soil for the nonviolent civil resistance we need across our city and our state. Each person, he explained, must figure out how to transmit the nonviolent values, and it must be done face-to-face in one-on-one encounters.

“Twitter will probably not lead to personal transformation,” he quipped.

There are many treasures in Los Angeles, and Rev. James Lawson is one of them. His nimble mind draws from history, Scripture, poetry and literature to analyze our world’s current dilemmas and to find solutions. The fact that his workshops are open to the public means that this treasure is one you can partake of to get inspired, challenged and renewed in your own thinking of how to effect change. The workshop is held one Saturday a month from 9 a.m.-noon at Holman United Methodist Church, 3320 W. Adams Blvd., Los Angeles; to receive notices of upcoming sessions, e-mail Walter Johnson at wlj619@gmail.com. If you’re lucky you’ll learn the details of Rev. Lawson’s newest nonviolent campaign.

Related Topics:Rev. James Lawson
Up Next