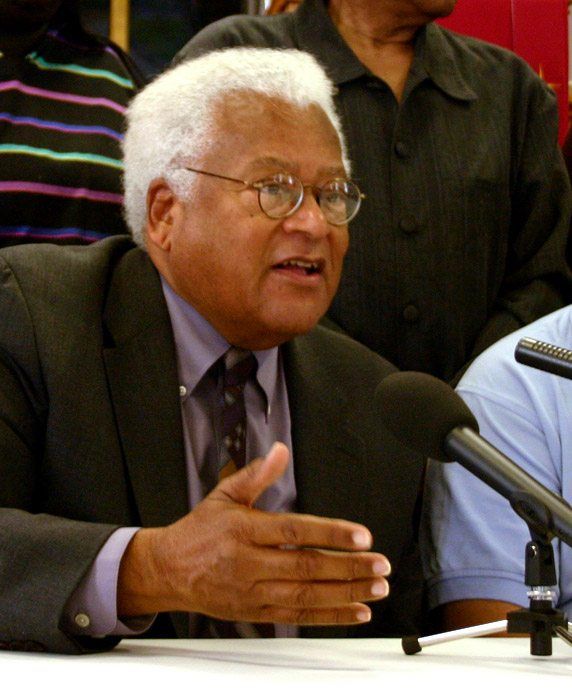 I have been wading through the three volumes of Taylor Branch’s history, America in the King Years, and reliving the dozen years between Montgomery and Memphis. The Montgomery bus boycott catapulted Martin Luther King, Jr., into the national headlines; Memphis was where he was assassinated. Throughout that tumultuous time, the Reverend James Lawson stood just offstage, a key partner in the nonviolent campaign for full citizenship for African Americans.

While King spearheaded the campaign to desegregate the buses in Montgomery, Lawson trained students in Nashville in the ways of nonviolence. He led small workshops tucked away in church basements. He taught his students not to react to taunts and threats. He gave them tools to remain calm and centered while undergoing arrest or physical attacks. Lawson believed that only by enduring the blows of hatred could haters see their own humanity. He brought Gandhi’s understanding of nonviolence to this country and he trained thousands of civil rights workers during those years.

The Reverend James Lawson was the person who kept King aligned with nonviolent practice. When the pressure seemed too intense to sustain nonviolence, Lawson coached King to go deeper into himself. When King began writing, Lawson guided him to the sources of strength and clarity that made his work so powerful for religious people across the country. For his efforts in Nashville, Lawson was booted out of Vanderbilt, where he was attending seminary.

I first met Lawson in the early 1970s, when he became pastor of the largest African American United Methodist congregation in Los Angeles. The bishop had appointed him chair of the regional Board of Church and Society and I was a member of that board.

Lawson taught us and led us to a faith-based understanding of the concerns we faced  in those days: Vietnam, the struggle of farm workers and, above all, the economic issues threatening the country – debt and inflation from war, stagnant wages for working men and women, the absence of power to influence the decisions by government and corporate institutions that affect our lives.

Over and over Lawson led the board members to understand the stories behind the headlines, then helped us write the resolutions that addressed them, which we took to the annual meetings of the United Methodist Church. We wrote position papers on economic democracy, rising oil prices and monopoly capitalism. We led church people to the fields of the Coachella Valley to witness the farm workers’ struggle first-hand. We led struggles over racism in the church itself.

Throughout the years, I have turned to Lawson for guidance and understanding. He led me to understand and deepen my own practice of nonviolence, helping me see it as a spiritual discipline that comes from the inside out. We were at the table together in the library of his church when CLUE – Clergy and Laity United for Economic Justice — was born to support a living-wage campaign in Los Angeles.

The Rev. Lawson, now retired, but still teaching nonviolence around the nation, will be honored by another social-change organization he helped found following 9/11, ICUJP — Interfaith Communities United for Justice and Peace — that focuses on world peace and domestic justice. A fundraising reception will be held Sunday, September 9, at 5:30 p.m., prior to a 7:30 p.m. keynote address, and is open to all at no cost. For more information, go to icujp.org.

Lawson was the pastor at an African American United Methodist Church in Memphis when he called on his friend Martin Luther King to support the striking garbage workers. It was there, April 4, 1968, that King was assassinated. Someone foolishly thought a moment of violence would end the struggle for justice, but that effort is never finished.

Author Charles Degelman on the Legacy of the 1960s