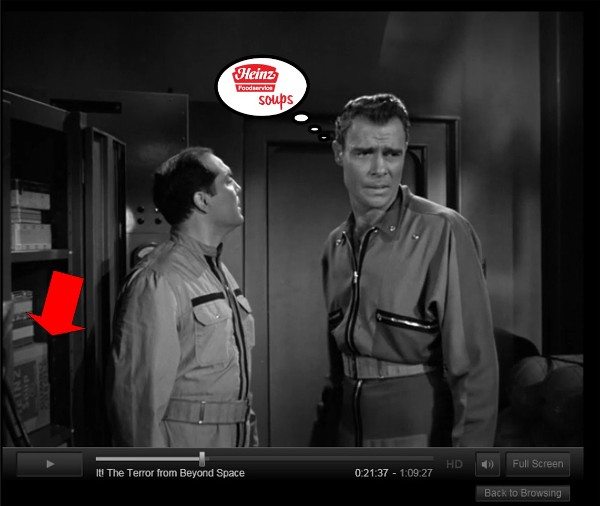 The other day I was streaming It!, an old science fiction film, and saw something odd on my computer screen. There, in the storage hold of the rocket ship returning from Mars, sat a crate of Heinz soup cans. The box was barely visible – blurry and jammed in the corner of a locker, next to all the cartons of cigarettes the crew members were smoking on their trip back to Earth. Still, we’re trained to notice product logos and I couldn’t miss Heinz’s distinctive lettering on its case of Creole Gumbo.

I was shocked that Heinz had even sold soup in 1958, when the film was made – let alone that they would figure in the story’s Tomorrowland of 1973. I did what any futuristic earthling would and Googled “heinz soup.” Sure enough, the company did sell a supermarket line in the 1950s, but eventually got out of the business except for its current Heinz Foodservice trade of selling tub-sized containers of Tomato Florentine to institutional clients. Even with the product placement Heinz got in that rocket ship, to say nothing of The Manchurian Candidate’s famous Heinz ketchup bottle scene, the company apparently lost the great soup war to Campbell’s.

In today’s world of product placement, of course, a crate of any brand of soup won’t be semi-hidden. Instead, the astronauts (whose spacesuits would resemble NASCAR drivers’ ad-splattered outfits) would be playing catch with the cans – in weightless slow motion. This was all cynically enacted for us by Morgan Spurlock in his 2011 documentary, The Greatest Movie Ever Sold. In it, Spurlock takes meeting after meeting with corporations as he tries to finance the very film he is making about product placement – by promising the companies that he will prominently feature their products in it.  The running gag is that even as Spurlock visits potential backers and media critics, he is seen drinking bottles of Pom Wonderful juices – one of his documentary’s sponsors.

Not everyone thinks this is so funny. For several years Commercial Alert, a project of Public Citizen, has lobbied government agencies to force film production companies to disclose the consumer products they are embedding into their works. The group’s stated position is that without such disclosure, the public will soon be watching infomercials masquerading as sitcoms or movie dramas, and not realize the deception.

Commercial Alert is not alone in its warnings. An extensive 2008 article in the Cardozo Arts & Entertainment Law Journal claimed that:

[P]roduct placement is not merely a trend in the advertising and entertainment industries but a “revolution in its infancy” and a “cataclysmic shift in the financing, packaging and selling of film and television properties.”

The author, Sandra Lee, noted that product placement, which began taking off in earnest when Reese Pieces candy conspicuously appeared in E.T., is here to stay. Sure enough, recently BrandChannel noted that even the generally logo-free Breaking Dawn carried a few well-placed, high-end products (Volvo, Belstaff jackets) in its scenes.

Still, I happen to like a little product placement in films – it lends a nice touch of realism, especially if the beer cans or potato chip bags are shot in less obvious three-quarter profiles. These days, though, I have one slight problem with my computer when I turn it on to stream old movies. Nearly every time I land on a Web or blog page, I am greeted by a banner ad for Heinz Foodservice Soup. All because I Googled “heinz soup.”

How’s that for space-age advertising? It makes me want to warn that rocket crew heading back to Earth – beware what you bring  home from Mars.