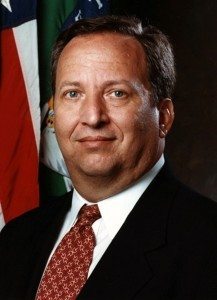 In his recent defense of Larry Summers President Obama appeared to be badly confused about the state of the economy. This apparently leads him to believe that the country should be grateful to Larry Summers for his successes, as opposed to furious at him for his failures.

Obama’s story is that the economy was in a free fall when he took office and the program that was in large part designed by Summers helped turn it around. While it is true that the economy was in free fall, there was no reason to expect that to continue regardless of what policies were pursued. Note that in every single wealthy country the sharp drop in output at the end of 2008 and the beginning of 2009 was stopped and reversed by the end of the year. Other countries were not able to rely on the genius of Larry Summers in setting their policies.

How much should we blame Larry Summers for an inadequate stimulus? That’s hard to say. It’s not clear that President Obama could have gotten a larger stimulus through Congress at the time, but it is clear that his team (presumably including Summers) badly underestimated the severity and the duration of the downturn.

As a result President Obama was celebrating the “green shoots of recovery” less than two months after the passage of the stimulus, at a time when the economy was still losing hundreds of thousands of jobs a month. Rather than trying to explain to the country that the hole created by the downturn was much bigger than they had recognized at the time they designed the stimulus package (which was true), President Obama talked about the need to pivot to deficit reduction.

As a result, he lost control of the economic narrative. Rather than the downturn being a story of a collapsed housing bubble leaving a hole in demand in the economy of more than  percent1 trillion a year, due to reduced construction and housing equity fueled consumption, the Republicans made the story one of out of control government spending.

The failure of President Obama to lay out the need for additional government spending, and to explain the fact that large deficits were the result of the collapse, virtually shut this perspective out of public debate. When the president won’t put the case out there, few Democrats in prominent positions will stick their necks out to make the case for him.

This has needlessly condemned millions of people to unemployment or under-employment and forced tens of millions of more to accept low wages and bad working conditions because they have no bargaining power in a badly depressed economy. We don’t know the extent to which Summers pushed this policy, but neither he nor anyone else in the Obama administration has indicated that he was opposed to it.

The Obama administration has also left the big banks in tack. In fact, the too big to fail banks are bigger and more profitable than ever. We know that Larry Summers played a big role in this. He argued strongly against those in the administration who thought that the government should take over these insolvent behemoths.

Of course Summers was the architect of the policies that laid the basis for the crisis in the first place. In the Clinton years he was a strong proponent of deregulating finance. He also pushed the high dollar policy that led to the country’s enormous trade deficit. This created a hole in demand that was filled by the stock bubble in the 1990s and by the housing bubble in the last decade.

President Obama seems to think that the country should be thankful to Larry Summers that we didn’t have another Great Depression. This is like telling little kids that if they don’t eat their spinach the bogeyman will get them.

There never was a reason to fear another Great Depression. We have known how to avoid one since Keynes wrote the General Theory in 1936. While we needn’t worry about a Great Depression, there is good reason to fear a prolonged period of stagnation in which unemployment is high and income is redistributed upward because workers have no bargaining power.

In fact, this is what we are now seeing and Larry Summers is among the people at the top of the list for blame. So no, the public should not be anxious to see him placed in the country’s most powerful economic post as Fed chair.

Related Topics:Larry Summers
Up Next