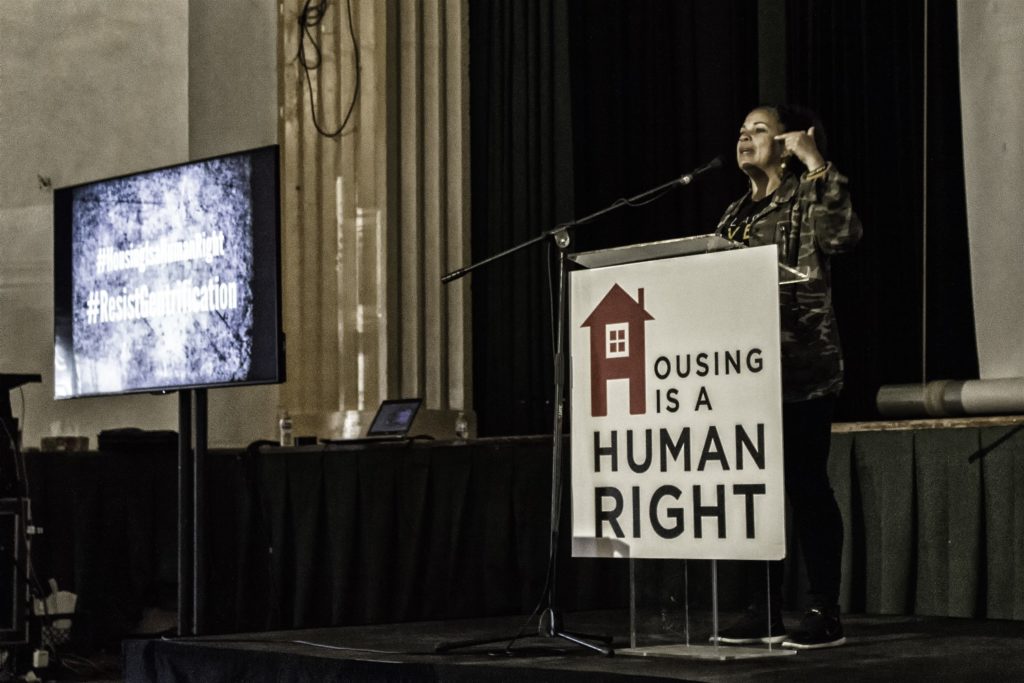 “Good morning, soldiers!” Damien Goodmon told some 500 people at a packed auditorium one recent Saturday morning in the South Los Angeles neighborhood of Leimert Park, the center of Los Angeles’ African-American arts community — and recently the scene of heated debates about changing demographics. The “soldiers” in attendance were organizers and “regular people” concerned about residents being priced out of their homes in what is now one of America’s most expensive cities.

Goodmon is the founder of the Crenshaw Subway Coalition, a group that has fought to bring public transit and community-oriented planning to the historically black neighborhoods of South L.A. But on December 2, he spoke as a representative of a new campaign called Housing Is a Human Right, launched by the nonprofit AIDS Healthcare Foundation, sponsors of March’s controversial Measure S. The target, however, remains the same: gentrification, the process by which working-class people of color are gradually displaced by the better off and, generally, white middle class.

It’s “undoubtedly a class issue,” Goodmon stressed in his remarks, delivered at the opening to the “Resist Gentrification Action Summit,” billed as the first of many and hosted by groups ranging from the Los Angeles Tenants Union to the local chapter of Black Lives Matter. But, he added, “There is nothing in America that is a class issue that is not also a race issue.”

It is of course true that the rising cost of housing affects people of all skin tones. But in the United States, the poor are disproportionately people of color. And in Los Angeles — home to the least affordable housing market and the largest population of officially impoverished people in the country, tens of thousands of whom sleep on the streets — the largest real estate projects are being built right in their neighborhoods. The $2.6 billion stadium for L.A.’s two new football teams, for example, is being built in Inglewood, which is 42 percent black and 51 percent Latino. That stadium is bringing with it over 3,000 housing units in what the developer terms a “master-planned neighborhood” set to include “a luxury hotel,” “a revitalized casino” and first dibs on NFL tickets for the lucky residents. 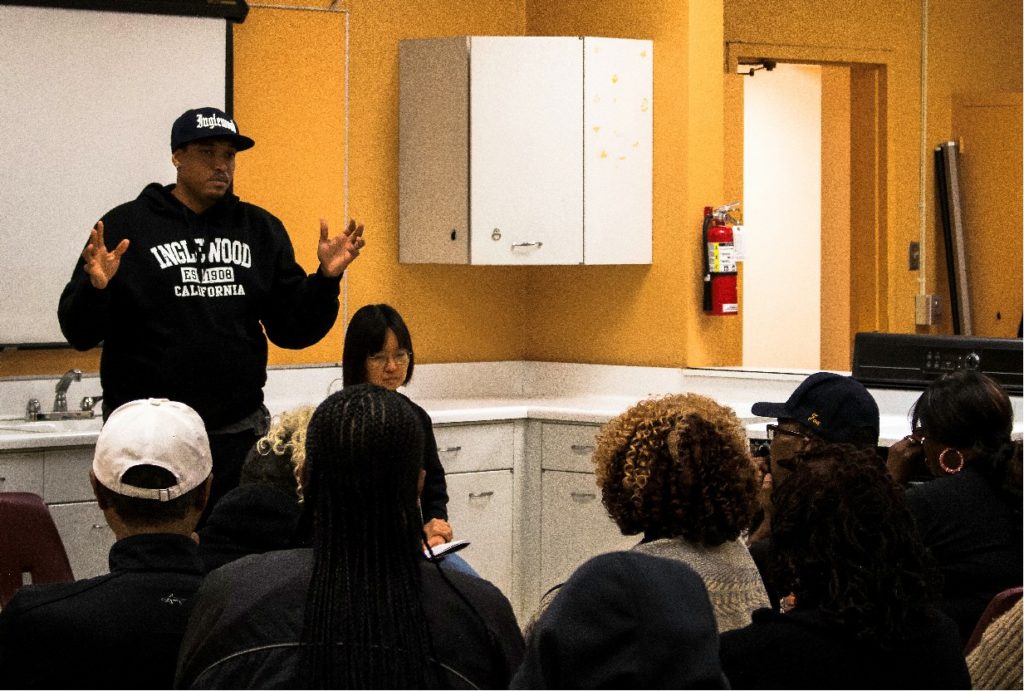 Nearby, another developer is breaking ground on a gated community, Grace Park, that will feature 228 detached condos. Inglewood already has two overwhelmingly black, solidly middle-class gated condo communities, Carlton Square and Briarwood. But those communities were developed before the explosion in market rate housing prices, and neither of the new planned developments appears intended for the existing Inglewood community, judging by the complete lack of affordable housing.

“Market rate, as I like to say, means not for me,” Goodmon remarked.

It’s the same story throughout Los Angeles and some of its suburbs, where massive housing projects include an affordable housing component as an afterthought, if that. On the outskirts of downtown, developers of The Reef — a “creative habitat tailored to meet the needs of the innovators, entrepreneurs and diverse creators that make Los Angeles the creative capital of the world” — are proposing to add over 1,400 housing units, 95 percent of which will be listed at market rates.

Woodrow Curry, founder of the anti-gentrification group Uplift Inglewood Coalition, told a breakout session at the weekend summit that rents in his building went up $300 in a month. His new neighbors told him they were working for the tech giants of L.A.’s Silicon Beach. With public transit expanding, and a new stadium coming, Inglewood has become an affordable home for employees of Facebook and Google, if not its current residents.

Curry said his problem was not with any of his new neighbors, however. While they may be white in a neighborhood that’s just four percent Caucasian, it’s “not a racial issue,” he said. The politicians who are stamping their approval on massive luxury housing projects, and doing little to address the lack of affordable options for current residents, are largely black, he said. The problem, he argued, is systemic.

“We can talk about race a lot here in L.A.,” Curry said, “but right now is really a time to shine that light on class.” He spoke of ultimately getting away from a system of absentee landlords. Much of the capital pushing up housing costs in California ostensibly comes from China, where the wealthy buy empty houses abroad as safe investments. Meanwhile, Curry and other L.A.-area activists have another goal: restoring rent control and bypassing the political class to do it.

Rent control, which caps the amount landlords can raise the rent every year, would not fix L.A.’s affordable housing crisis, but it would help long-time renters in neighborhoods that are suddenly desirable in the eyes of investors and others who have been priced out of the Westside. Activists in Inglewood have already filed a petition seeking to get a rent-control initiative on the ballot in 2018; activists in Pasadena are aiming to do the same, proposing a measure that would cap rent increases at 4.5 percent a year.

The city of Los Angeles itself already has a limited “rent stabilization” ordinance, under which rents may be increased by three percent a year — but only affecting units constructed before October 1, 1978.

Maria Lopez of Housing Long Beach said she too is “fighting for rent control in 2018” — one that, unlike the ordinance in L.A., would go as far as the state currently allows — and that her group would begin collecting signatures early next year to get it on the ballot. With over a million undocumented people in L.A. and Orange counties alone, she argued that the fight for housing is one and the same as the fight to keep immigrants in the country they call home.

“My family is in terror of deportation every single day,” Lopez said. “My family has been ripped apart by deportation, and I don’t want it to happen again.” The immigrant-rights movement, she added, should work “hand in hand with the renter-rights movement. We can’t have sanctuary without having the right to be here.”

Karen Kwak, an organizer with the Glendale Tenants Union, said her group would likewise fight to get rent control on the 2018 ballot. Part of the activists’ strategy is to fight everywhere so developers cannot concentrate their resources on one battle. “We’re part of a vast movement,” Kwak said.

That was the message the Leimert Park summit sought to drive home: Advocates of affordable housing are legion. The event felt like a launch party for a drive to pursue rent control everywhere, including Sacramento. Summit organizers, including the AIDS Healthcare Foundation and the Alliance of Californians for Community Empowerment, are seeking to overturn the Costa-Hawkins Act. That law bars rent caps from being imposed on any California building constructed after 1995. While legislation has been introduced to change that provision, organizers aren’t taking any chances. They’re gathering signatures to put the question to voters next November.

Organizing a Cure for Flatlining Wages