Last July the Migration Policy Institute documented more than 400 changes to America’s immigration system made between President Donald Trump’s inauguration in January 2017 and the middle of 2020, and concluded that Trump “has dramatically transformed the U.S. immigration system, in bold-brush, sweeping ways but also in small technical details across the immigration portfolio… The arrival of the COVID-19 pandemic during Trump’s fourth year in office turbocharged many of these efforts.”

Yet, as destructive as Trump’s efforts have been to block immigration, the president failed to reshape border policy through convincing Congress to pass comprehensive immigration reform. This means that the administration’s many restrictive and punitive actions against émigrés (who include refugees and asylum seekers)—made by presidential executive order, directives issued by the attorney general’s office and regulatory changes—are subject to swift reversal once Joe Biden occupies the Oval Office. The following is a list of the most important reversals Biden can undertake. MPPs, which, far from protecting migrants, force thousands of asylum seekers to live in fetid refugee camps just south of the U.S.-Mexico border while their cases are being adjudicated in U.S. courts, have directly led to “people dying and disappearing,” according to Holly Cooper, co-director of the Immigration Law Clinic at the University of California, Davis’ law school. “The migrant camps in Mexico — kids are being shot, trafficked. It’s hell on earth.” But, says Cooper, since the MPPs were created via executive order, they can be rescinded simply through Biden signing a new order on day one of his presidency. 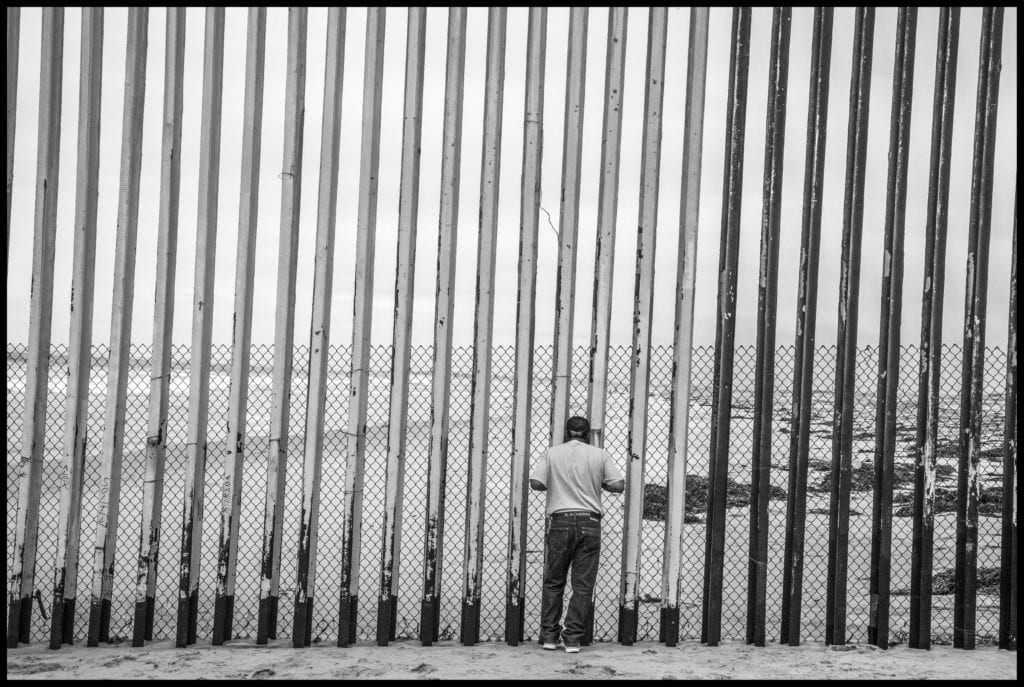 A man on the Mexican side of the border wall between Mexico and the U.S. (Photo: David Bacon)

Under Trump, Attorneys General Jeff Sessions and William Barr used their unitary powers to reverse long-established case law around asylum, making it all but impossible for victims of domestic violence and an array of other crimes committed abroad to claim asylum. Ramon Valdez, of the Portland, Oregon-based Innovation Law Lab, which has filed numerous lawsuits against Trump’s asylum policy, says the Trump efforts amounted to an “attack on the principle of asylum. Broad swaths of people who should be eligible for asylum suddenly aren’t, because of tampering with case law.” Because attorney generals have such extraordinary power over the interpretation of immigration law, it will be just as easy for the new attorney general to reinterpret asylum law in a way that doesn’t automatically exclude the great majority of applicants. Using similar unitary powers, in January 2018 the Director of the Executive Office for Immigration Review, at the direction of the attorney general, sent a memo to all immigration court judges mandating a high minimum number of cases that they must hear. Under that system, for nearly three years now, these judges have been forced to hear a vastly increased number of cases per day, undermining due process and making it harder for asylum seekers to get a full and fair hearing. All the Justice Department would need to reverse this quota system is an email sent out, on day one, to all immigration judges saying that the Trump-era quota system no longer held. It’s low-hanging fruit but it would have a huge impact on the way immigration courts work. Also on the topic of asylum: Biden’s team could immediately begin to negotiate an end to the Asylum Cooperative Agreements, which the Trump administration strong-armed Central American countries to sign onto, and which allow the U.S. to deport asylum seekers from, say, Honduras, to one of Honduras’ neighbors. Even before the pandemic, this policy was denounced by human rights activists, who were concerned that deportees would end up vulnerable to gangs, to human traffickers and to extreme poverty in the countries to which they were sent. Scores of COVID-positive deportees were flown into Guatemala, helping to seed a disease outbreak in a country lacking a medical infrastructure to deal with the crisis. In each of the four years of Trump’s term in office, the presidential finding on refugee admissions has drastically lowered the cap on those admissions. When President Barack Obama exited the White House in January 2017, that limit was 110,000 per year. Today’s cap, set to kick in starting in January, is a mere 15,000. Biden can increase that number to something more in line with the historical norms, and he can end the process of “extreme vetting” that Trump’s team used to limit still further the numbers of who would be admitted. That, however, will take months rather than weeks, as Biden will have to submit a new presidential finding on refugees.

Pull the Plug on the Muslim Travel Ban But there is action that Biden can take immediately that would make it possible for refugees from countries red-flagged by the Trump administration to enter the U.S. again. On day one, Biden can, through an executive order, end the so-called “Muslim travel ban” against citizens of Iran, Yemen, Syria and several other predominantly Muslim countries. 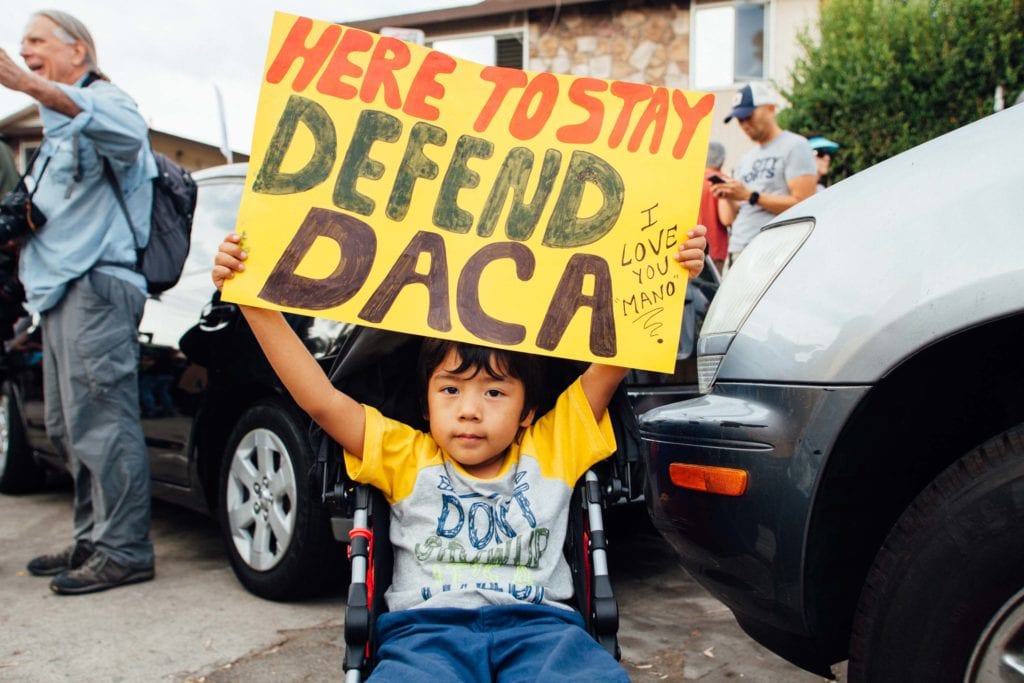 Immigrant rights advocates hope that the incoming administration will withdraw the Trump administration’s support for legal efforts to revoke the Deferred Action for Childhood Arrivals (DACA) program. Since there are already several court rulings in place preserving DACA, including a 2020 U.S. Supreme Court ruling, a Biden pivot on this would, in and of itself, be enough to preserve DACA for the foreseeable future. Through withdrawing administration support for Trump’s legal efforts to end the Flores Settlement Agreement — which limits the numbers of days children can be held in immigration detention facilities — Biden’s team can similarly, in effect, turn away from a core part of Trump’s efforts to lock down the border. There is currently an injunction against the administration ending Flores. If Biden’s Department of Justice simply accepts that injunction, the Trump effort to engage in wholesale family detention as a deterrent strategy against asylum seekers will end. Advocates at Central American Resource Center (CARECEN) L.A., which works on behalf of the hundreds of thousands of Central American and other holders of Temporary Protected Status who have been threatened with deportation by Trump’s efforts to roll back virtually the entire TPS program (which often helps victims of natural disasters), hope that Biden will protect TPS. He could do so by announcing that his administration would no longer appeal court rulings that have, to date, prevented the program from being ended.

As a longer-lasting fix, to ensure that people from Honduras, El Salvador and the other countries included in TPS continue to be eligible and are once again issued new work permits, Biden’s team could revisit the decisions to end Temporary Protected Status for migrants from the affected countries, explains Xochitl Sanchez, a CARECEN organizer. To do so, all they need do is re-examine the evidence the Trump administration used to declare conditions on the ground now safe enough to return TPS holders to their countries of origin. Finally, as a matter of social equity, Biden must immediately reverse the multitude of Trump-era actions intended to impose a de facto wealth test on immigrants. First among these are the Public Charge rules that allow any usage of food stamps, medical assistance or housing aid to be counted against an immigrant when they apply for citizenship, and allow consular officials overseas a huge amount of discretion in determining whether a visa applicant is likely to use public aid at some point down the road.

Several courts have issued injunctions against Public Charge. While it rewrites the rules, and goes through the public comments period before those new rules become the law of the land, Biden’s administration should no longer contest the existing injunctions against Public Charge. In a similar vein, the Biden team could announce in the Federal Register that it is reversing the huge fee increases Trump implemented for work authorizations, asylum applications and citizenship applications, all of which were intended to make it harder for poor immigrants to gain legal, permanent status in the U.S.

Can Eminent Domain and COVID-19 Funds Save Affordable Housing in L.A.’s Chinatown?