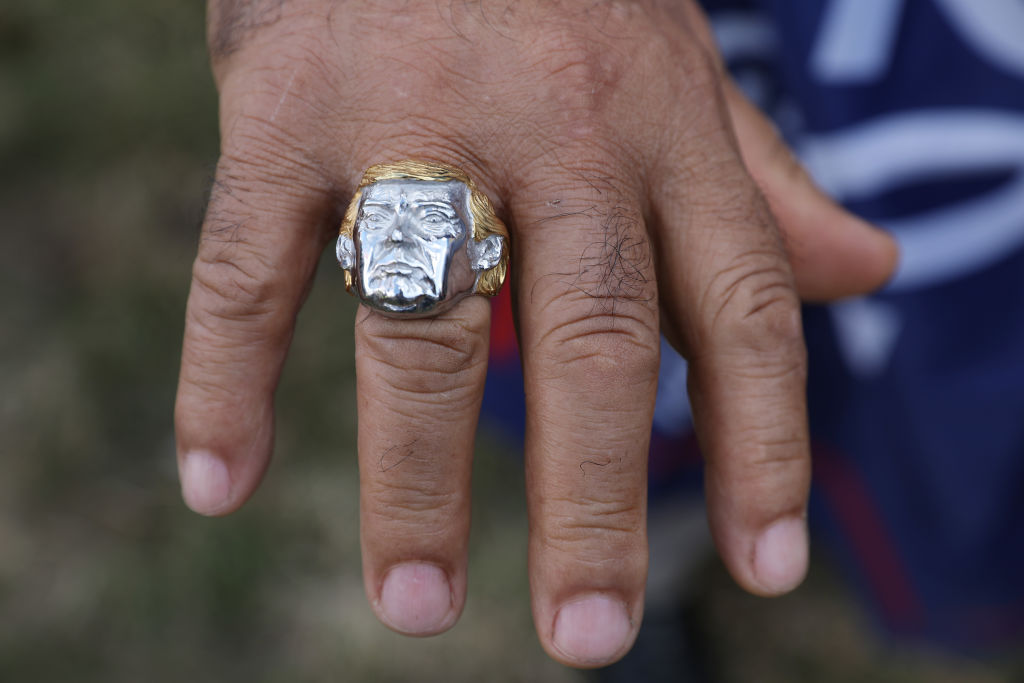 A man wears a Trump ring at an Evangelicals for Trump campaign event. (Photo by Joe Raedle/Getty Images)

Throughout Donald Trump’s presidency, immigration issues exemplified the nation’s deepest divides, serving as battlegrounds for intense political and cultural fights over America’s identity. Yet only a few years ago, during the Obama and Bush administrations, plans for comprehensive immigration reform earned strong bipartisan support. Today, with a new administration entering the White House, reformers wonder if Democrats and Republicans can reconnect to address the country’s broken immigration system. After four years of Trump, will advocates find common ground or scorched earth?

Trump’s confrontational style and tight grip over his party meant any dissenting Republican would catch his wrath, a dynamic that could continue to affect immigration debates after he leaves Washington. The issue has been at the root of multiple government shutdowns, contributing to the nation’s ongoing political impasse.

Some experts, however, say the divisions on Capitol Hill may not run as deep as they seem, and traditionally conservative interests representing religious groups, business and law enforcement could be ready to rejoin Democrats on the issue.

The president’s tough talk and xenophobic policies may have energized his base, but they didn’t sit well in some conservative circles, especially among evangelical Christians. Matthew Soerens, national coordinator of the Evangelical Immigration Table, says, “Both anecdotally and from polling, evangelicals didn’t like seeing families separated at the border. That was one of the few immigration policies that really did stir up a lot of evangelical opposition.”

According to Ali Noorani, president and CEO of the National Immigration Forum, fallout from disturbing televised scenes at the border took a political toll on Republicans. “In 2018, there is a pretty clear argument to make that Republicans lost the House of Representatives because of the Trump administration’s family separation policy and rhetoric around immigration,” he told Capital & Main.

Although evangelicals disliked Trump’s actions toward migrants, Soerens cautions that it’s important for them to address immigration issues strategically. Given the country’s politically contentious climate, he thinks evangelicals will be more likely to speak out on the subject if specific policy changes are within reach. “For a local pastor who is weighing how much [he] talks about this…there’s a little more incentive to talk about it when it might actually make a difference,” he says.

There are also key differences between evangelicals and the larger immigrant rights movement that potential alliances will have to overcome. “Most evangelicals support an earned legalization process that has some element of restitution involved, like a fine. Most evangelicals pretty strongly do not support amnesty,” explains Soerens. “We can have different discussions about why they have violated those laws, and I am very sympathetic to some of those dynamics. But they did violate a law, and if we can’t acknowledge that, that makes a lot of evangelicals who have a real concern about the rule of law uncomfortable.”

Another conservative-leaning group that might be willing to step up for immigration reform is law enforcement. The Law Enforcement Immigration Task Force, for example, is a national group of police officers who advocate for reform.

“Local law enforcement must be able to have trust with our community members. Some of those community members are undocumented and have worked hard, contributed to our rich culture and economy and responsibly raised families,” says Fresno County Sheriff Margaret Mims, who co-chairs the organization. “To maintain community confidence, we need an immigration system that recognizes both the benefit of immigrants coming to our country as well as the rule of law. Allowing undocumented immigrants to earn their way into a well-functioning legal system will go far in developing that community trust.”

How much influence will Trump retain over congressional Republicans, the bureaucrats who ran agencies concerned with border security and the many low-level Trump loyalists
who staffed federal bureaucracies?

The group claims that updating the nation’s immigration policies would benefit law enforcement by discouraging illegal arrangements between employers and undocumented workers, as well as by curbing illicit industries that prey on migrants.

“Local law enforcement’s No. 1 job is to serve and protect the city or the community that they have jurisdiction over. And the only way they can do that is if the entirety of their community trusts them,” notes Ali Noorani. “So what we’ve seen over the last four years is really an erosion of trust between local law enforcement and the immigrant community because of what the Trump administration was doing around immigration enforcement.”

In addition to stoking fear in immigrant communities by calling for mass deportations on Twitter, Trump presided over an uptick in immigration enforcement activity, which had been declining before he took office.

For the business community, there are other compelling reasons to support a federal pathway to U.S. citizenship, including a demand for labor in industries such as agriculture, food service and home care. According to David Bier, an immigration policy analyst with the libertarian Cato Institute think tank, Republicans in Congress are feeling pressure to act on immigration reform because “they hear from businesses in their districts about how they need workers. And so it’s the demand and need for workers that is influencing businesses to get involved, and ultimately, that is trickling up to the members of Congress who are involved in this issue on the Republican side.”

Despite Trump heading the traditionally pro-business GOP, calls for foreign labor stand in sharp opposition to his “American first” platform and his actions to suspend temporary work visa programs.

“Many Republicans will oppose letting immigrants in under any conditions, but . . . a legal process for [gaining citizenship] would persuade some and make it easier for reform to happen.”

A variety of factors could determine how immigration alliances play out in the early days of the Biden administration. One large question is how much influence Trump will retain in Washington — not just on congressional Republicans, but on the people who ran his administration. The latter includes everyone from high-ranking advisers and the heads of agencies concerned with border security to the many low-level Trump loyalists who staffed federal bureaucracies.

“A big wild card would be the former administration officials who made these policies,” posits Bier. “All those people will be taking jobs in Congress and in think tanks and lobbying organizations. Will they still be engaged on immigration?”

Another question: How will Biden handle immigration in 2021, and what will he do with Trump’s policies?

“Really, a wholesale scrapping of what the last administration has done is what they need to do,” says Bier, who thinks Biden will need to address some of the root causes behind America’s immigration woes in order to make progress.

“It is really incumbent upon the new administration to provide lawful means for people to enter and work in the United States, and that’s going beyond reversing what the Trump administration did,” he explains. “Many Republicans will oppose letting immigrants in under any conditions, but I think taking the fire out of the debate when it comes to illegal immigration [by] making clear that this is a legal process for people would persuade at least some to start moving on their position and make it easier for reform to happen.”

According to Noorani, the next federal ruling on Deferred Action for Childhood Arrivals (DACA) could be a “first gambit” for how immigration debates will shape up in the coming months. He also believes the narrative Biden tells around immigration will be instrumental in forging alliances.

“There is an opportunity to talk about Central American migration, border security, asylum and refugee resettlement in a way that resonates positively across the political spectrum,” he suggests. “The more the Biden administration is talking about family unification, about what it means to keep our nation safe and secure in a smart and a compassionate way, I think he can make that case without undermining policy principles.”

This would be a huge departure from Trump’s narrative, which has played up street gangs such as MS-13 and the relatively small number of undocumented immigrants who commit violent crimes. “Trump poisoned the waters of bipartisanship pretty significantly, particularly when it comes to immigration,” says Noorani, “but I think Republicans, as the dust settles from this election and the last four years, are going to realize that immigration [reform] is in their political best interest.”