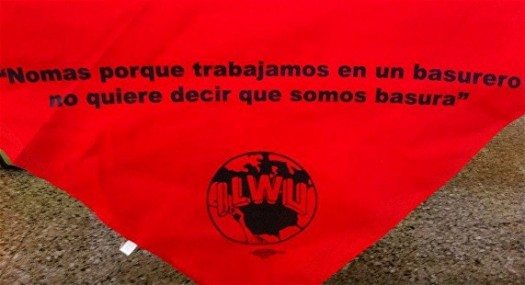 "Just because we work in a trash dump, doesn't mean we are trash."

Hundreds of Waste Management workers belonging to the International Longshore and Warehouse Union (ILWU) struck three facilities Friday morning, March 15, shutting down the company’s East Bay operation in for five hours. The successful job action was made possible by the support from hundreds of Teamster members who honored picket lines and refused to drive the company’s trucks that collect refuse and recycling early each morning from residential and industrial customers. Additional support came from members of the Machinists Union who honored picket lines by refusing to report for their maintenance and repair jobs during the strike.

ILWU members organized their picket lines beginning at 3 a.m. outside the company’s headquarters in Oakland, a recycling facility in San Leandro and the massive regional landfill in Livermore/Altamont. The job action was sparked by the company’s blatant law-breaking against employees, including retaliation that targeted immigrant workers.

In the days leading up to the strike, workers filed formal charges against Waste Management with the National Labor Relations Board that include:

One particularly nasty episode involved Waste Management’s improper and illegal use of the federal “E-Verify” system to retaliate against immigrant recycling workers who were organizing for their rights on the job. Workers and community supporters have made several appearances at the Oakland City Council to protest Waste Management’s abusive behavior.

Fred Pecker, Secretary-Treasurer of ILWU Local 6 based in Oakland:

America won’t work if big companies like Waste Management can break the law with impunity and violate workers’ rights. All workers deserve respect on the job and the right to be free from illegal threats.

In addition to support from other unions, community groups joined the picket lines, including the East Bay Alliance for a Sustainable Economy (EBASE). Several days before the strike, a community meeting was convened at a local church, where workers alerted community supporters about the conflict caused by Waste Management’s retaliation against immigrants. In early February, 200 workers convened a historic “Recycling Workers Convention” that was held with community support and employees from four major recycling operators in the East Bay. Most of the meeting was conducted in Spanish, and was chaired by workers who are taking a leadership role in the campaign to improve industry conditions in Alameda County. Supporters at the convention included a host of elected officials, church leaders, environmental activists, industry experts and community organizations. Workers ratified a plan to improve industry conditions and supporters signed a pledge to provide better jobs and improve recycling services.

The strike generated heavy media coverage that was sympathetic to worker concerns. Five television stations carried extensive reports, including live coverage from the picket line. Some of the interviews were conducted by workers themselves.

Waste Management has a history of mistreating workers in the Bay Area. In 2007, the company issued a demand for cutbacks then “locked-out” 500 Teamster drivers. The company’s lockout left customers in Oakland and other East Bay cities with little or no garbage service for a month, triggering heavy fines against the company. The company also retaliated against clerical workers who supported Teamsters during the lockout by outsourcing 38 clerical positions in November of 2009. While demanding cutbacks from workers, Waste Management’s CEO has been collecting a salary of $7.4 million. The company reported profits of over $800 million in 2012.

Talks with the company are expected to resume in the coming days and weeks on a variety of issues.

(Craig Merrilees is communications director of the International Longshore and Warehouse Union. His post first appeared on Labor’s Edge and is republished with permission.)