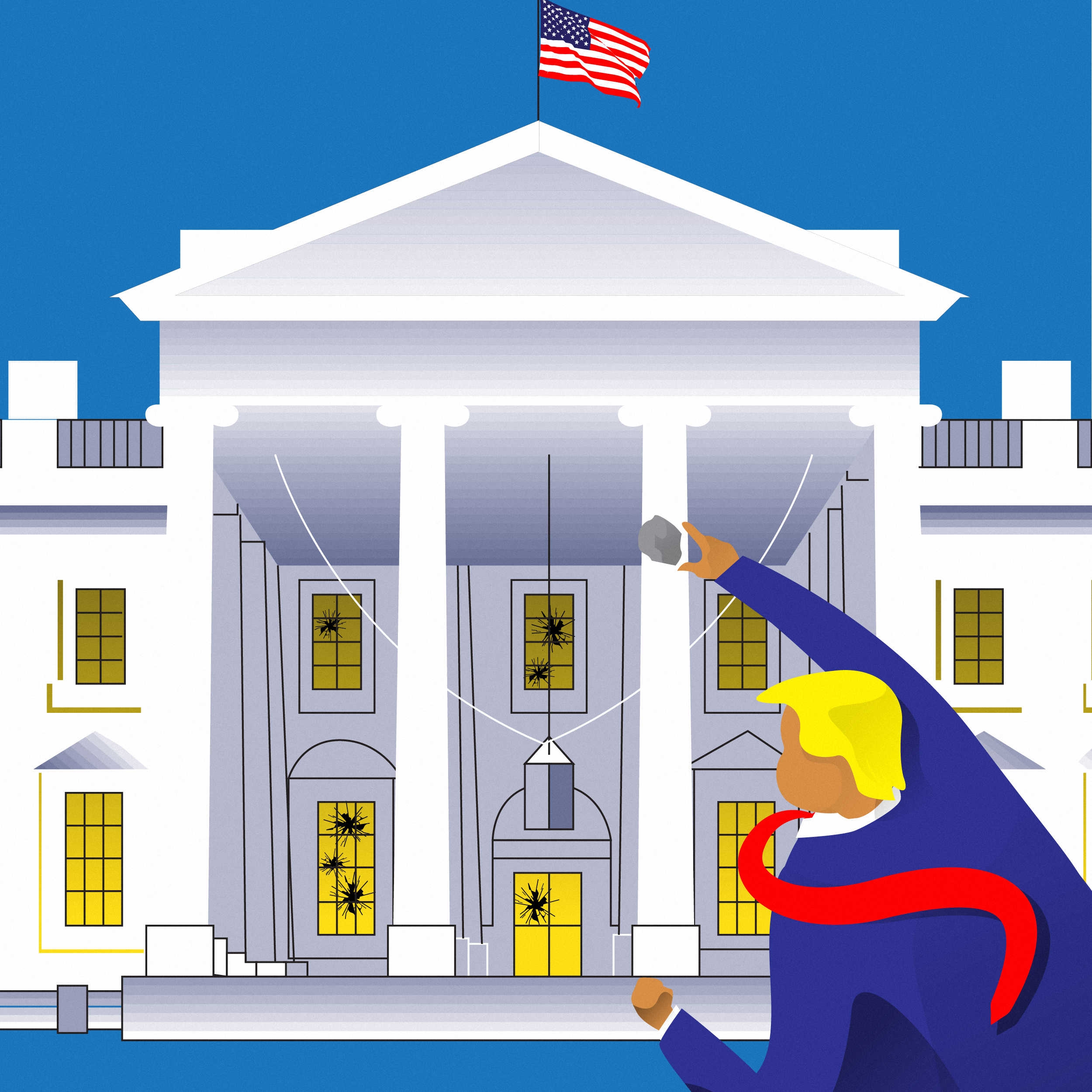 He’s threatened to challenge the election results by any means necessary. He’s refused to commit to a peaceful transfer of power. But even if Donald Trump is defeated in an indisputable landslide on Nov. 3, there is still much he can do in the 78 days before the inauguration of his successor. First on his agenda: self-preservation and revenge.

Rep. Adam Schiff (D-CA), who served as the House Democrats’ lead impeachment manager, warns Trump could retaliate against his “list of political enemies” and engage in a rush of “executive orders or extreme policies he’ll try to sign in the intervening months.”

His next salvo could come in an avalanche of last-minute agreements with Trump’s favorite authoritarian regimes or dramatic regulatory shifts on the environment, immigration, labor or transportation, and across multiple agencies of the executive branch.

Just days before the election, Trump signed an executive order stripping civil servants of protection from political interference, and pushed forward a seismic survey in search of oil in the Arctic National Wildlife Refuge in Alaska, sidestepping a normal environmental review. Cabinet departments are now looking at increasing the number of hours truckers can drive before resting and allowing trains to transport dangerously flammable liquefied natural gas. Whether more such damaging moves are in the offing depends on how well Trump keeps his administration together after a loss. “He’s so unstable,” says Matt Dallek, a presidential historian and George Washington University professor who has authored books on Reagan and FDR. “If you just watch his day-to-day actions on almost any issue, it seems unlikely that he would say, ‘Here are the three policy issues that I want to try to work on before I leave office.’ It’s just not how the guy operates.”

Rep. Eric Swalwell, one of several California Democrats who’ve been critical of the administration, says Trump has made so many slipshod attempts to achieve his supposed goals that the worst case may not happen. “We’re spared a lot of times as a country by his cowardice and incompetence,” Swalwell says. “If the [election] outcome is overwhelming, I do think he vanishes and backs down.”

The real damage could be from Trump pushing through regulatory rule changes and adding loyalists into scientific advisory boards who will later be difficult to remove.

Even at the height of Trump’s presidential powers, his executive orders have been most valuable to him as photo opportunities at the Resolute Desk. Any initiatives signed during his final weeks in office could mean even less.

“Executive orders are only as good as the president who is issuing them,” says Cynthia Lebow, a senior political science lecturer at UCLA and former general counsel for the U.S. Senate Judiciary Committee under then-chairman Joe Biden. “He could issue as many executive orders as he wanted in the last two weeks or, for that matter, [on] the last day of his presidency, and they could all be overturned and reversed [on] day one if Joe Biden becomes president.”

Still, it’s likely that a defeated Trump would want to look out for his family and friends, issuing a tsunami of pardons for at-risk family members, campaign loyalists and White House officials. Donald Trump Jr. as well as President Trump’s son-in-law Jared Kushner (who may face perjury charges) and two convicted felons — former National Security Advisor Michael Flynn and 2016 campaign manager Paul Manafort — would all be candidates.

“It would be totally corrupt if Trump fired Wray or Fauci because they disagreed with him. I do believe Joe Biden will hire Dr. Fauci right back if that were the case.”

Many of Trump’s critics fully expect him to attempt a pardon for himself for any federal crimes, including instances of possible obstruction of justice as catalogued in the Mueller report. “I have the absolute right to PARDON myself,” Trump tweeted in 2018, “but why would I do that when I have done nothing wrong?” Andrew Weissmann, a former lead prosecutor for special counsel Robert S. Mueller III, has said in recent interviews that Trump has little to lose by making the attempt, which would at least delay any prosecution.

The extent of Donald Trump and family’s criminality is “potentially so vast that he could possibly be charged with multiple criminal acts,” says Dallek. “There’s campaign finance violations, obstruction of justice, lying under oath, multiple violations of the Hatch Act, the self-dealing, the self-enrichment and, of course, the tax cases.”

Schiff calls the notion of self-pardoning “patently unconstitutional and antithetical to the notion that nobody, not even the president, is above the law. I would expect the courts to strike that down.”

He appears to be right: A 1974 opinion from the Justice Department’s Office of Legal Counsel stated, “Under the fundamental rule that no one may be a judge in his own case, the President cannot pardon himself.” An attempted self-pardon by Trump would inevitably face a court fight, particularly if a new attorney general decides to prosecute the outgoing president. But it may stop short of the U.S. Supreme Court.

“I’m not even sure that the Supreme Court would take a case involving the exercise of the presidential pardon power under the separation of powers theory,” says Lebow, who remains an advisor to the Biden campaign. “This is so clearly something that comes under the president’s power under Article One.”

For nearly 90 years, presidential reelection has been the norm, with two significant exceptions in Jimmy Carter and George H.W. Bush, who both gave teary concession speeches. Rejection at the polls is a devastating vote of no confidence for any incumbent, and a rejected Trump could be unpredictable. He might, for instance, decide to retaliate against those he’s judged as insufficiently “loyal” to him, much as Lt. Col. Alexander Vindman was ejected from the National Security Council after testifying in the Trump impeachment hearings. In recent days, the president has been openly angry with Dr. Anthony S. Fauci, the government’s leading infectious disease specialist, and FBI Director Christopher A. Wray, among many others.

“Executive orders are only as good as the president who is issuing them. He could issue as many executive orders as he wanted . . . and they could all be overturned and reversed [on] day one if Joe Biden becomes president.”

“It would be deeply concerning and totally corrupt if Trump fired Wray or Fauci because they disagreed with him,” says Rep. Ted Lieu (D-CA), adding, “I do believe Joe Biden will hire Dr. Fauci right back if that were the case.”

The real damage Trump leaves for his political opponents could be most insidious at the administrative level, pushing through regulatory rule changes while continuing to embed Trump loyalists into scientific advisory boards who will be difficult to remove after he’s gone.

“To be honest with you, they’ve been rushing these things from the beginning — lots of poorly justified decisions and shoddy rule-making,” says John Coequyt, global climate policy director for the Sierra Club. In terms of climate change, the Trump years have meant a turn backwards, beginning with the president’s decision to leave the 2015 Paris Agreement.

“A lot of what we were very concerned about has already happened,” Coequyt adds. “Mostly what we’re talking about now are smaller rules.”

The upside to this “shoddy” rule-making in the final days, Coequyt notes, is that it tends to make reversal easier, though still complicated and time-consuming. Court challenges are inevitable, as the usual requirements for public comment are sidelined. And some of the regulations will still be going through legal review and could be withdrawn by the incoming Biden administration.

“It’s still going to take a lot of time to change, even if the rules never really go into effect. It’s a lot of administrative work and a lot of uncertainty for whoever is being impacted by the standards,” says Coequyt.

“We’re spared a lot of times as a country by his cowardice and incompetence. If the [election] outcome is overwhelming, I do think he vanishes and backs down.”

Former Rep. David Jolly, who quit the Republican Party two years ago, worries how adversaries around the world might react while the U.S. is frozen in an ongoing crisis over the election.

The potential for catastrophic misjudgment in U.S. foreign policy is open-ended, similar to Trump’s almost offhanded 2019 decision to pull American troops from a largely peacekeeping role in northern Syria, leaving Kurdish allies vulnerable to attack by Turkey. More than 130,000 Kurdish people were displaced as a result.

Jolly, now a Florida independent who has been an outspoken critic of Trump, fully expects the president’s influence over the GOP to dissipate quickly after a reelection defeat. “If Trump loses handily and there really is no contest to be debated after November 3rd, he won’t be surrounded by Republican lieutenants that will help him execute some of these demands,” says Jolly. “He’s not going to have Republican allies that will support his chaos and campaign of vindictiveness.”

Jolly also predicts that the president’s instinct for protecting and projecting the Trump brand will restrain him from a campaign of total shock and awe on his way out of the Oval Office.

“The president has lived every day trying to figure out how he can extract as much personal wealth out of the presidency for him and his family, and I don’t think that changes whether he wins or loses,” Jolly says. “He uses the office for his personal gain every day until noon on January 20th and then probably thereafter.”

Trump, the Sequel—Should We Be Afraid?