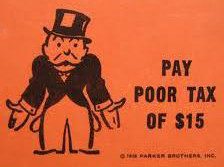 Brace yourself. In coming weeks you’ll hear there’s no serious alternative to cutting Social Security and Medicare, raising taxes on [the] middle class and decimating what’s left of the federal government’s discretionary spending on everything from education and job training to highways and basic research.

“We” must make these sacrifices, it will be said, in order to deal with our mushrooming budget deficit and cumulative debt.

But most of the people who are making this argument are very wealthy or are sponsored by the very wealthy: Wall Street moguls like Pete Peterson and his “Fix the Debt” brigade, the Business Roundtable, well-appointed think tanks and policy centers along the Potomac, members of the Simpson-Bowles commission.

These regressive sentiments are packaged in a mythology that [says] Americans have been living beyond our means: We’ve been unwilling to pay for what we want government to do for us, and we are now reaching the day of reckoning.

The truth is most Americans have not been living beyond their means. The problem is their means haven’t been keeping up with the growth of the economy — which is why most of us need better education, infrastructure, and healthcare, and stronger safety nets.

The real median wage is only slightly higher now than it was 30 years ago, even though the economy is twice as large.

Wealth has become even more concentrated than income (income is a stream of money, wealth is the pool into which it flows).

So why are we even contemplating cutting programs the middle class and poor depend on, and raising their taxes?

We should tax the vast accumulations of wealth now in the hands of a relative few.

To the extent they have any wealth at all, most Americans have it in their homes – whose prices have stopped falling in most of the country but are still down almost 30 percent from their 2006 peak.

Yet homes are subject to the only major tax on wealth — property taxes.

Yale Professor Bruce Ackerman and Anne Alstott have proposed a two percent surtax on the wealth of the richest one-half of one percent of Americans owning more than $7.2 million of assets.

They figure it would generate $70 billion a year, or $750 billion over the decade. That’s more than the fiscal cliff deal raises from high-income Americans.

Together, the two sets of taxes on the wealthy — tax increases contained in the fiscal cliff agreement, and a wealth tax such as Ackerman and Alstott have proposed — would just about equal the spending cuts the White House has already agreed to, totaling $1.5 trillion (or $1.7 trillion including interest savings).

That seems about right.