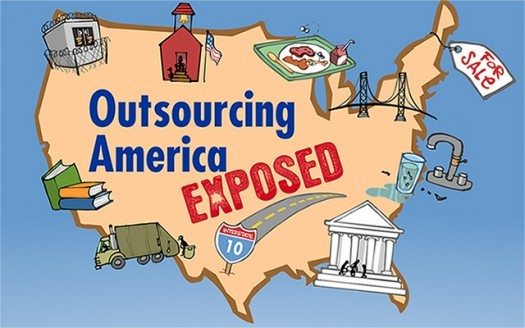 (Image by Mark Fiore for CMD)

As Gary Cohn and Bill Raden point out in a recent Frying Pan News piece, it’s become the pastime of conservatives to skew debates over public employee pensions by singling out the comparatively high retirement benefits of “top-tier city and county executives,” while ignoring the typical pensions earned by the vast majority of government workers. This ploy is also used, naturally, in propaganda decrying the salaries of public sector employees while they are still actively working for states and cities.

The Center for Media and Democracy’s new project, Outsourcing America Exposed, has discovered that there is, in fact, a breed of “government worker” whose members receive sky-high, taxpayer-funded salaries. They are not teachers or librarians, however, but “CEOs whose corporations make billions by taking control of public services.”

Says CMD executive director Lisa Graves: “Taxpayers are being duped by corporate CEOs and Wall Street banks that are siphoning money out of our communities for huge salaries and bonus packages.”

Graves is referring to the gold-plated trough known as privatization, in which private companies assume control of public services or, in the case of education, seize schools by absorbing them into tax-funded charter systems – or even cyber education systems. CMD points to the case of K12, a publicly traded company, and its CEO, Ron Packard. K12 is an online education company and, says CMD, “On its own and as a member of the American Legislative Exchange Council (ALEC), K12 Inc. has pushed a national agenda to replace bricks and mortar classrooms with computers and replace actual teachers with ‘virtual’ ones.”

You could say this arrangement makes a former Goldman Sachs honcho like Ron Packard “America’s highest paid teacher,” as CMD calls him, even though K12 has proved to be a poor school district.

But whose complaining? Certainly not Packard, who “made over $19 million in compensation,” while pay for K12’s “school board” (i.e., its top executives) “skyrocketed 96 percent in 2013.” We can’t wait to see how their pensions pan out when they retire.