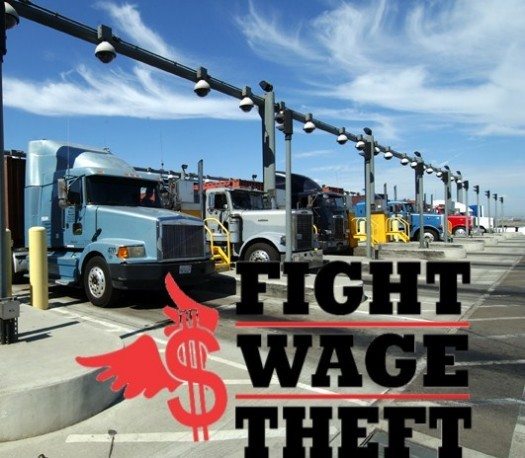 It’s almost payday. Imagine if you went to cash your paycheck only to find that your employer had instead billed you for the opportunity to work for them.

For drivers at Seacon Logix, paying to work was only the beginning of the abuses they faced from their employer, a midsized port trucking company based in Carson.

A group of nine Seacon Logix drivers has persisted for almost two years in seeking to reclaim their wages even as the company has reached a new low in an already notoriously low-road industry.

Seacon Logix didn’t just evade the law by claiming that its employees were “independent contractors,” allowing it to avoid basic responsibilities, like payroll, income taxes and workers compensation insurance.

It didn’t just pass on its operating costs to drivers and force them to pay for vehicle leases, registration and insurance payments by illegally deducting them straight out of drivers’ paychecks, which frequently left drivers taking home well below minimum wage.

And it didn’t just force drivers to pay for company expenses like fuel and repairs out of their own pockets, which often left them owing the company money after a week’s worth of long days – some of which stretched as long as 17 hours.

Seacon Logix also allegedly discriminated against drivers after they came forward to file claims with the California Division of Labor Standards Enforcement. Then the company appealed the state Labor Commissioner’s January, 2012 ruling that its drivers were, in fact, employees and were therefore owed approximately $30,000 each for about eight months of work.

Finally, on December 28, 2012, Seacon Logix turned around and filed a frivolous and retaliatory lawsuit against its drivers.

Drivers who couldn’t pay for diesel now have to get lawyers.

Yet rather than be intimidated, drivers have filed retaliation complaints with the Labor Commissioner in response to both the lawsuits and the workplace discrimination they allegedly have faced since filing their initial claims.

In the meantime, none of the workers have received their stolen wages. The trial in L.A. Superior Court to hear the company’s appeal of the Labor Commissioner’s rulings began this week, so the first group of drivers will know the outcome soon.

While the depths to which Seacon Logix has sunk to avoid its basic responsibilities to both its drivers and the State of California may appear especially egregious, unfortunately most of the story is standard business practice in the port trucking industry. Roughly 90 percent of port truck drivers are misclassified as independent contractors. Many face similar abuses, taking home less than minimum wage after the company deducts its own operating costs out of drivers’ paychecks. And drivers misclassified as independent contractors are denied paid sick days, health insurance, overtime pay, the right to organize and other basic benefits and rights that employees have.

The drivers at Seacon Logix had the courage to take on their company — and they are winning. The Labor Commissioner’s initial rulings are clear – just because an employer pays its drivers with a 1099 rather than a W-2, it doesn’t mean they are not employees. When the facts on the ground prove otherwise, they are entitled to the same rights as all employees.

The group at Seacon Logix joins port drivers across the country who are fighting for their rights. Drivers at Toll recently set a standard for what a high-road trucking company looks like when they organized to join the Teamsters and won a groundbreaking contract. More such action – undertaken through wage claims, in the courts and by organizing – is needed in order to transform the industry so that low-down practices are the exception rather than business as usual.

(Jessica Durrum is a research-and-policy analyst with the Los Angeles Alliance for a New Economy’s Clean and Safe Ports Project.)