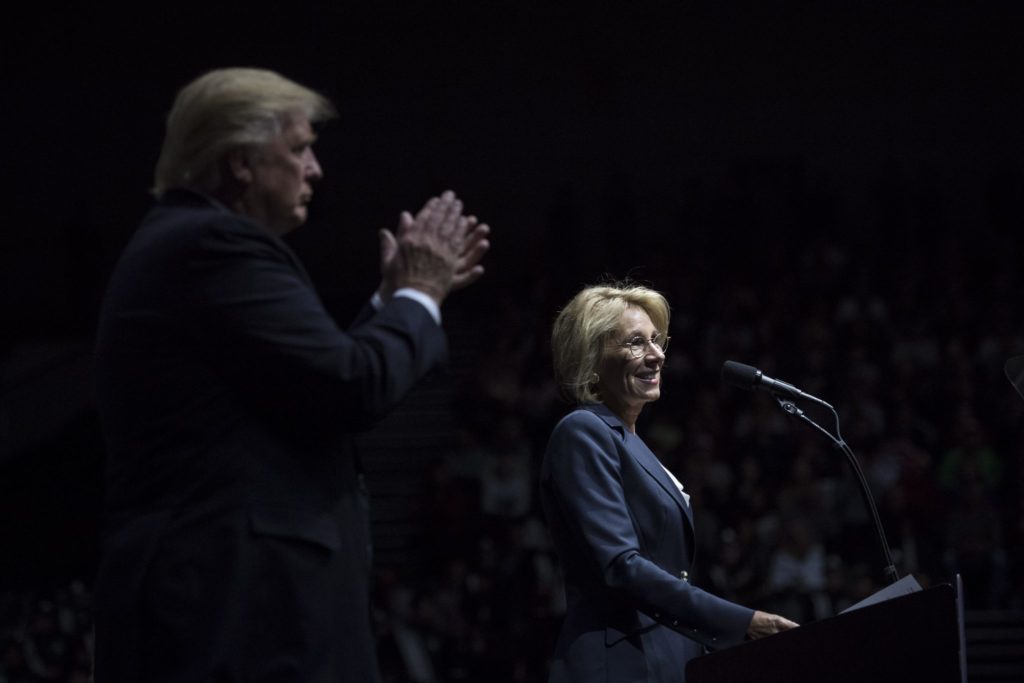 With Senate confirmation of Donald Trump’s education secretary nominee Betsy DeVos now hanging by the thread of a likely tie-breaking vote from Vice President Mike Pence, one thing has become apparent: DeVos’ views on public education are well outside the mainstream of either party.

Perhaps less well known is that DeVos has demonstrated a willingness to override and even go after Republicans who fail to completely embrace her program of charter schools, vouchers and deregulation.

The defections this week of GOP Senators Susan Collins of Maine and Lisa Murkowski of Alaska, who both announced that they would vote against DeVos, underscore a fact that Michigan Republicans have known for some time. DeVos is committed to an ideological stance on education that leaves little room for compromise. And as one of the state’s wealthiest and most powerful political donors — in the 2016 election year alone, she and her husband, Dick DeVos Jr., gave $2.7 million to Republican candidates — DeVos has the clout to enforce her will. (Since 1999, DeVos and her extended family has spent an estimated $82 million on political campaigns at the state and federal levels.)

Republican State Senator Goeff Hansen, who represents Michigan’s 34th District, learned a painful lesson last year about DeVos’s hardline positions. Hansen became the unlikely champion of an extraordinary bipartisan effort, the Coalition for the Future of Detroit Schoolchildren, to rescue Detroit Public Schools (DPS) from years of financial insolvency and woeful academic performance. A central goal was to fix the destabilizing free-for-all system — likened by some to the Wild West — in which a dozen or more entities could open and close schools with virtually no oversight.

By the time Hansen introduced legislation in the Michigan State Senate, longtime adversaries had put aside their differences to embrace a package that few had thought possible when the process began. The proposed law passed by the Senate on March 2016, which also gained the support of Republican Governor Rick Snyder, would have created a commission charged with overseeing the opening and closing of schools, as well as authorizing $720 million to bring DPS out of near-bankruptcy and giving operating control back to the local district, which had been run by state for years.

The legislation was passed with the support of both Democrats and Republicans and sent to the Michigan House of Representatives. Dave Pagel was one of the Michigan House Republicans who supported the creation of the oversight commission. “I did support the Detroit Education Commission,” Pagel told Capital & Main. “We needed to have some control over where schools were popping up. Simple choice doesn’t solve any problems; we need to find a way to improve education regardless of the choices that are happening.”

DeVos and her allies, however, were unwilling to cede any ground in the war they had waged for years to ensure that charter schools in Michigan remain almost entirely unregulated. They worked to dismantle the bill, and by the time they were finished, the House had stripped the oversight commission from the legislation while adding draconian requirements for school closures.

With the specter of DeVos withholding campaign funds looming over Republicans who dared to defy her, the new version of the bill passed the House by one vote, was approved by the same margin in the Senate and signed by Governor Snyder. The turn of events infuriated proponents of the original bipartisan legislation and left Hansen on the verge of tears.

“This was a just and honest cause. Unfortunately, I’m unable to support this bill, and it pains me greatly to say that,” he said during a speech after the vote last June. “I keep being told that these compromise bills represents three-quarters of a loaf. Why should Detroit children accept less than what other children across the state are willing to accept?”

Hansen wasn’t the only Republican leader whose efforts to pass the bipartisan bill were pushed aside by DeVos. John Rakolta, Jr., a conservative businessman who last July signed on as one of Donald Trump’s Michigan finance chairs, had been one of five co-chairs of the Coalition for the Future of Detroit Schoolchildren. Among those joining Rakolta in the coalition’s unlikely stewardship was David Hecker, president of the American Federation of Teachers Michigan. In right-to-work Michigan, bringing together a staunch Republican fundraiser like Rakolta and a labor leader like Hecker was nothing short of miraculous. But the two men, along with dozens of others in the coalition, had reached a hard-won consensus about how best to improve Detroit’s embattled public schools.

But DeVos and others overrode the bipartisan coalition with a furious lobbying campaign. According to campaign finance documents, nearly $1.5 million was doled out by DeVos and members of her family to the state Republican Party and candidates in the aftermath of the legislation’s passage.

Paul Muxlow was not one of the recipients of DeVos’ largesse. A member of Michigan’s House of Representatives, Muxlow, a traditional Republican, found himself on the wrong side of DeVos’ education crusade back in 2011, when he voted against eliminating caps on the number of charter schools in the state. The following year, he was targeted by a pro-charter lobbying group founded, and primarily funded, by DeVos and her family. He almost lost his seat when the group spent close to $200,000 to defeat him.

“I’ve voted for almost everything the DeVoses wanted,” Muxlow told Bridge, a Michigan publication. “I’d walked a parade for Dick Devos when he ran for governor (in 2006). And then they ran the dirtiest campaign against me.”

The bottom line for Michigan Republicans — and perhaps for GOP representatives anywhere — is that you cross or ignore DeVos and her educational crusade at your own peril.

With DeVos Vote, Some Republican Senators Must Weigh Opposing Trump Versus Supporting Policies That Hurt Public Education in Their Own States