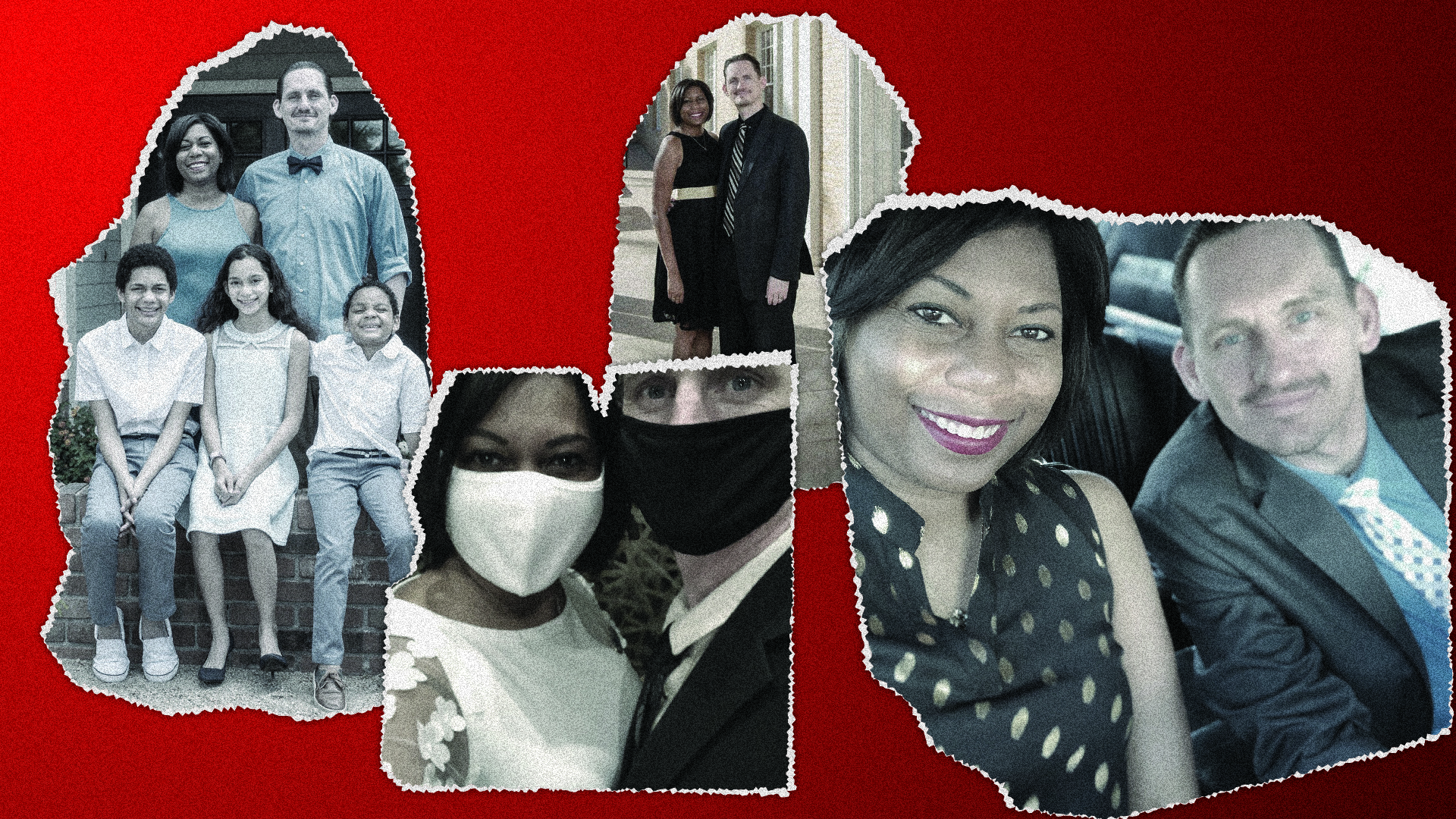 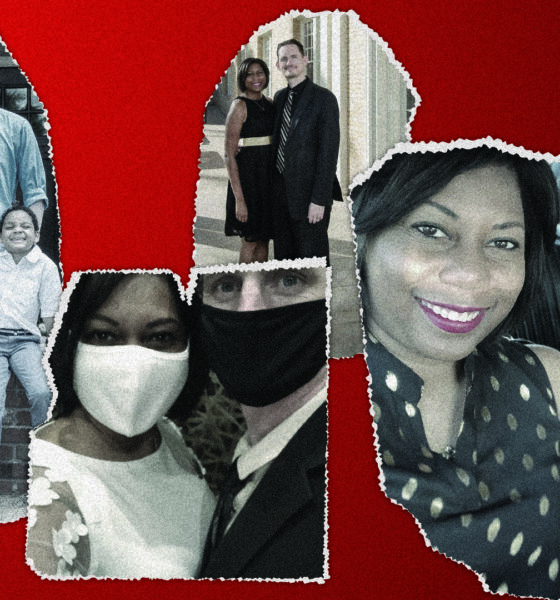 Honey, Who Shrunk Our Income?

What one couple’s lost wages say about the decline of the middle-class American dream.

Erica Tatum-Sheade’s heart broke when she saw Michael Jackson’s “Man in the Mirror” music video for the first time as a kid.

She watched as images of homelessness, starvation, civil rights protests and homegrown terror splashed across the screen, while the King of Pop cooed, “I want to make a change.”

When the video debuted in 1988, Erica was just a little girl, and she didn’t have a complete understanding of the issues playing out in front of her. But she knew that she, too, wanted to make a change. She wanted to help.

Although Erica didn’t know it at the time, such work was in her blood — her mother was a social worker and attorney and, after a medical discharge from the military, her father got a degree in social work before he retired. They lived a comfortable middle-class life, but one driven by humanitarian purpose.

Erica remembers going to work with her mom at Homes for Black Children, a nonprofit agency that found foster homes for children who were removed from their families. While the field of social work was always in the cards for Erica, she never imagined the number of hurdles she’d eventually face over the course of her career — from wage stagnation to student loan debt and even racism.

“Being around my parents so much at the time, I thought I could help people and make lots of money doing it,” Erica said. “But as an adult, I now know that’s not true.”

Erica, 40, and her husband Ryan Sheade, 41, who together own a private practice called Integrated Mental Health Associates in Scottsdale, Arizona, are now caught up in a long-term crisis that’s playing out across the country: the fight for basic financial security during an era of pervasive income inequality.

Erica and Ryan are now caught up in a long-term crisis that’s playing out across the country: the fight for basic financial security in an era of pervasive income inequality.

At the outset of their careers, Ryan and Erica had two goals in mind: They wanted to help people, and they wanted to make a decent living so they could support their growing family. They never imagined those two goals might be mutually exclusive.

A biracial couple, Erica and Ryan play off of each other, fitting together like two complementary puzzle pieces — the very reason they’re able to work together in a brick and mortar office and live together under the same roof. Ryan is the talker of the two. He’s expressive, outgoing and possesses a deeply sarcastic and self-deprecating sense of humor, sometimes earning a smirk from his wife. Erica, the matriarch of the family, exudes a quiet calm, self-assurance and a warmth that builds over time. United in their life’s mission, they seem to not only balance each other out, but also appear to genuinely love each other.

Ryan and Erica Sheade are now clinically licensed social workers in private practice, but their struggle to reach and maintain sustainable income levels that can secure them a future is akin to those of similar working people across the country.

While annual pay in the field has steadily increased over the last two decades in Arizona, it is far from where they should be — if workers had enjoyed their share of the fruits of heightened productivity over those years. But when adjusted for inflation, the average Arizona social worker today actually makes between $4,000 and $6,000 less than social workers earned in the state over 20 years ago.

There are a lot of social workers in the United States, and in response to the needs they serve, social work has become a fast-growing field. Employment is expected to increase 13% by 2029, according to the Bureau of Labor Statistics.

But the financial reality for social workers in Arizona is headed in the opposite direction. Entering the field of social work can require multiple degrees and a considerable investment in education and training. But as many social workers make their way up the professional ladder, their incomes don’t keep up, leaving many saddled with student loan debt that can take decades to pay off.

The field of social work in Arizona, in particular, is also ripe with barriers to entry, including a confusing classification system, a stigma attached to the field, complex insurance and Medicaid rules, and a legacy of policies that have minimized wage hikes and hurt social workers’ ability to organize.

These same policies also directly impact the communities served by social workers, driving cycles in which clients with the most extreme needs are handed off to underpaid rookie social workers at state-run agencies where burnout and thus staff turnover are high.

The situation of many social workers like the Sheades in Arizona reflects the urgency of the income-inequality crisis in much of the country. Incomes haven’t risen as quickly as they should have when the rising cost of living is factored in, and many families are failing to maintain the quality of life and buying power their parents and grandparents worked generations to establish.

Last fall, a study by the RAND corporation found that tens of millions of Americans could and should be making twice what they’re currently earning if the country’s economic growth had been shared over the past 45 years as broadly as it was from the end of World War II until the early 1970s.

Social workers like Erica and Ryan, who work to heal the collective mental health of communities, often feel devalued by a society that needs their services more than ever.

The Sheades are on the front lines of this crisis. As part of their work, they’re tasked with helping Arizonans struggling to pay the rent and buy groceries, giving the couple an up-close look at how the rising cost of living and cuts to anti-poverty programs have hurt a growing number of people in the state. And in their own profession, similar to other essential workers like teachers and health care workers, their ability to attain the middle-class dream and raise a family faces numerous challenges. On one side, there is the shrinking value of their professional time, while rising housing costs and the soaring cost of education chip away at their earnings. For employees in the state who face similar pressures, there are added ones, such as the aggressive opposition of political leaders to the right of workers to join unions that might help boost their incomes.

Social workers like Erica and Ryan, whose essential jobs involve working to heal the trauma and improve the collective mental health of communities across the country, often feel themselves devalued by a society that needs their services more than ever.

“You end up with people like us who’ve been in the field for a long time, and we’re trying our best to welcome everybody in and keep the door open for everyone,” Ryan said. “But we’re only human and we can only do so much.”

Together, Erica, Ryan, and their three children — Calvin, 7; Eliana, 12; and Matthew, 14 — live a modest but comfortable life on a suburban desert landscape. The family’s four-bedroom house was built in 1985, has a large backyard with grass (somewhat rare for Arizonans), a wooden swing set and a pool. They also share the space with two dogs and a tortoise named Stanley.

They take their kids to theater and dance classes, and the couple is pushing their eldest Matthew, who is heading into the ninth grade, to invest his growing mound of pocket change in the stock market to gain a deeper understanding of the value of a dollar.
The couple has also set aside time to help Matthew identify his ideal college, figure out how much it will cost, and devise a savings plan for making that school a financial possibility. Every once in a while, the Sheades participate in a family “no-spend weekend,” in which they try to enjoy some quality down time without spending money on a meal out or entertainment.

Despite such relative fiscal prudence, their life comes at a major cost; they do not really have a substantial savings or retirement fund.

To get their family budget to pencil out, the duo are constantly working. They split up shifts at their private practice between six and seven days a week. When they work Sundays, it’s either because a client’s needs are urgent, or to scrape together an extra bit of income. Sometimes after the children go to sleep, Ryan will squeeze in another client or two.

“Our 14-year-old said to us the other day that he and his sister used to always be so mad at us for working so much,” Ryan said. “That was one of those shots to the heart.”

Erica, laughing, said they both had to work “about seven jobs at once collectively” to get to where they are today — although that exaggeration isn’t too far from the truth. They each now make about $68,000 from their private practice — but that doesn’t provide health insurance. And to cover the rest of the expenses of their decent life for a family of five and invest in their children, they’ve taken on additional work.

Ryan draws a second salary of $34,000 administering donation-based therapy at the Franciscan Renewal Center, a large Catholic institution in Scottsdale. As the director of the Therapy, Support and Counseling Ministry, he recruits volunteer therapists to provide sessions to anyone in need, in exchange for clients giving a donation to support the ministry. Ryan then separately provides clinical supervision to help many of the volunteers become better therapists.

Though the extra gig is part of Ryan’s mission to bring affordable social work services to all, it’s also a necessity. The Franciscan Renewal Center is the family’s only viable option for access to affordable health insurance. In fact, after $1,200-$1,400 a month is removed from his paycheck for that insurance, he takes home just $400 per week from that job. With Ryan’s secondary wages, the family’s income roughly meets their expenses.

According to the Center for Economic Policy and Research (CEPR), if the national minimum wage had risen alongside productivity levels since 1968, hourly wages across the country would be $24 an hour today, with full-time minimum wage workers making $48,000 in annual wages. This would almost certainly lead to substantially higher incomes for middle-class families like the Sheades, helping them save for a more secure future and retirement, and perhaps allowing them to spend more time with their kids.

But according to the Bureau of Labor Statistics, social workers nationwide make an average of $51,760 per year or $24.88 per hour — just barely above what the CEPR suggests minimum wage levels should be if they had kept up with productivity gains since 1968.

Though annual wages appear to have steadily risen over the last two decades, they lag behind the inflation rate (see chart below).

Despite their willingness to work such long hours at multiple jobs, the Sheades are one of the many families who have discovered that the math doesn’t add up the way it used to. While Erica and Ryan have long labored to “make a change” in the world, they have only recently begun to recognize that their situation might not be sustainable in the long run.

(This is the first installment of a three-part story.)

What You Should Be Paid vs. What You Are Getting Paid