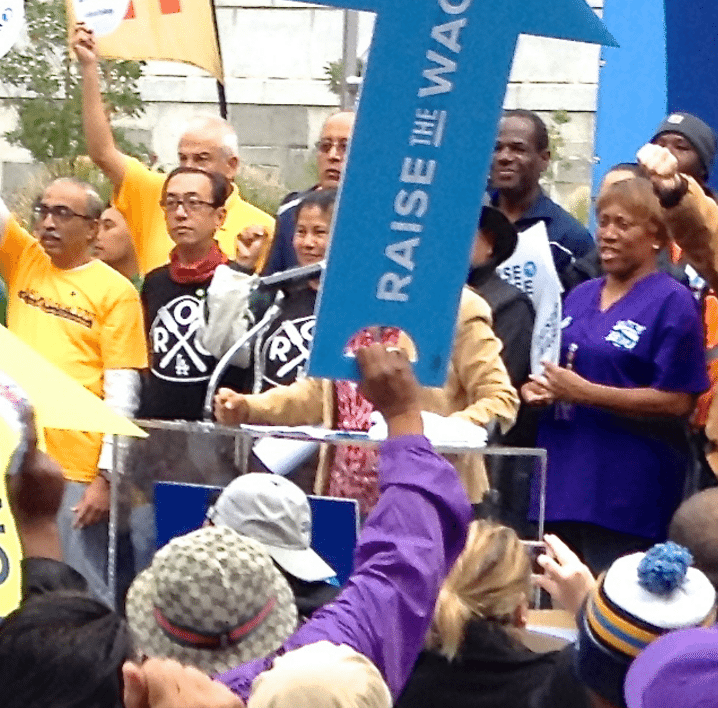 Barring an unexpected reversal of fortune, California is on track to become the first state to officially raise its minimum wage to $15 an hour. News first emerged on March 26 of an agreement with Governor Jerry Brown and leading Democratic legislators to raise the wage from its current $10 hourly mark to $10.50 beginning January 1, 2017, followed by continuous upticks that will result in the wage leveling off at $15 an hour by 2022. (Businesses employing fewer than 26 workers would get an extra year to institute the increases.)

After that the minimum can rise – but not fall – according to inflation. The agreement includes a provision giving workers three days of paid sick leave annually; it also permits California governors to freeze the wage in times of extreme economic downturn.

The movement toward a $15 wage has not followed a straight line, with individual city electorates or governments passing ordinances raising local wages higher than the state minimum (which cities will still be allowed to do under the proposed law), but making little headway outside of California’s liberal coastal belt. The issue has recently been complicated by the emergence of two competing union-sponsored measures that have sought placement on this November’s state ballot.

At a media teleconference held Monday afternoon, labor leaders and others hailed the coming pay hike.

“No one who works hard should live in poverty,” said the event’s moderator, Laphonza Butler, who serves as both president of the Service Employees International Union’s state council and as co-chair of the Los Angeles Fight for $15 committee. And, in a sign that labor is not taking its apparent victory for granted, she added that until the legislation passes, unions would not cease their efforts to put the matter of raising the wage before voters.

The mainstream media have not been as sanguine about the benefits of the higher wage, however. The Los Angeles Times and Washington Post have focused much of their attention on the wage boost’s predicted dire effects on small businesses. They have repeated familiar Armageddon scenarios in which restaurant diners will be forced to pay higher menu prices. The New York Times described California as “a guinea pig” in an economics experiment.

On a call-in to KPCC’s AirTalk radio show, Jake Mangas, the head of the Redding Chamber of Commerce, warned host Larry Mantle that the price of a pancake breakfast could rise from $3 to $5. On that same program, United Healthcare Workers West president Dave Regan called the raise “a historical and transformational development.” Regan said the pay raise “is not about pancakes,” but was “about three and a half million people who can work full time and make $21,000 a year. Everybody knows those are not just poverty wages but deep poverty if you’re trying to raise children.”

Tom Scott, state executive director of the National Federation of Independent Business, which represents 22,000 small businesses in California, complained to Capital & Main that the business community was not included in negotiations about the wage hike that took place between the governor and organized labor.

“We learned about [the wage agreement] through a news alert Saturday,” Scott said. “It was not an email that came from the governor’s office or from de León or Rendon’s office.” Kevin de León (D-Los Angeles) is the state Senate Pro Tem and Anthony Rendon (D-Lakewood) is the Speaker of the Assembly.

Scott dismissed wage-hike advocates who claim the raises will increase workers’ spending in their communities and help local businesses.

“There’s a lot of economic analysis behind this that has shown that the increased purchasing power is offset by increased costs. You’re going to see the vast number of businesses passing on their costs to consumers.”

At the labor-sponsored call-in news conference, University of California, Berkeley economist Michael Reich said that “prices might go up one percent over a five or six year period – not 50 percent,” as business critics are claiming. He added that the wage hike will affect about 38 percent of all California workers.

“The minimum wage is not intended as a weapon to keep people poor,” said Reich, “but as a tool to create an economic floor.”