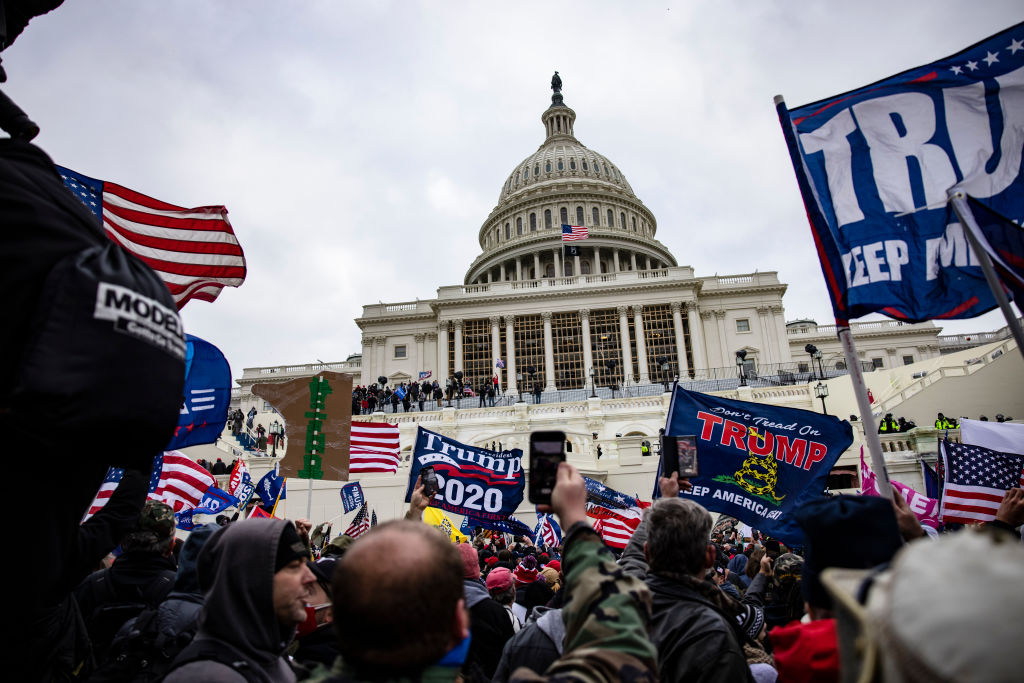 Four years ago, Duke University historian Nancy MacLean was traveling the country, meeting with activists, students, and journalists, warning of an “all hands on deck” emergency for American democracy. She was promoting her book examining the intellectual roots of the far right’s decades-long attempt to shackle democratic institutions through partisan gerrymandering, attacks on labor unions and changes to rules and regulations that often went unnoticed by the public at large.

Now, after a violent attack on the Capitol, sham voter audits in Arizona and elsewhere, and electoral officials increasingly under threat, her calls of alarm seem prescient. Nineteen states passed 33 voter suppression laws in 2021, and more are on the way. In statehouses around the country, Republican lawmakers are pushing policies that would allow partisan legislatures to subvert the will of the voters. According to a recent poll, one-third of Americans back political violence “if elected leaders will not protect America,” with Republicans supporting violence at more than twice the rate of Democrats.

Capital & Main checked in with MacLean to see what she was making of the moment. She remains laser focused on the role of dark money — spending on politics by shadowy nonprofit organizations not required to disclose their donors — in crippling government and undermining voting rights. Much of our conversation centered on David and Charles Koch, the brothers whose fossil fuel fortune supports lobbying, right-wing political candidates and a network of think tanks (David Koch died in 2019). That investment buttresses an agenda of tax cuts, deregulation and climate change denial that over time has profoundly altered the perspective of Republicans in Congress and beyond, says MacLean.

MacLean is a fellow at the National Humanities Center in North Carolina, where she is working on a book.

Capital & Main: A year after the storming of the capital, a third of Americans and 71% of Republicans believed that Biden’s election was illegitimate according to one poll. Whom do you hold responsible for this state of affairs?

Nancy MacLean: Ultimately, I hold the big dark money donors of the Republican Party accountable. In particular, the Koch network, which has, for so long, used disinformation as a strategy. They have given money to Republican officeholders who are weaponizing racism, fear of immigrants, homophobia, in order to turn people out to the polls for this agenda. And they’ve been doing this for years.

Of course, there’s all this stuff going on at the grassroots. There’s lots of anxiety and you have traditions of racism and sexism and all of these other things. But I truly believe if you took the donor money out of our politics and particularly this dark donor money on the right, we wouldn’t be having this craziness.

Do you think that there are tensions between the aspirations of those who are pushing a radical right-libertarian agenda and Republican voters who are motivated around cultural grievance?

Sadly, what we’re seeing, and Jan. 6 really confirmed this for me, is that, when push comes to shove, donors like Charles Koch want to see their agenda go through. And that they can get it through in a kind of clean way, that would be a preference. But if they have to rely on the kind of ugliness we’ve seen come out of this radicalized Republican Party, they’ll do that too, because the agenda matters to them more than anything else.

“I think Charles Koch expected Trump to win. I think had COVID not set in, Trump would have won.”

Can you talk a little bit about Jan. 6? In your talk earlier this month at the National Humanities Center, you said the insurrection included three concentric rings of activity, and you connected one of those rings to the Koch network.

It was actually [House Select Committee member Jamie Raskin] who referred to the three concentric circles of activity, the largest grouping being the outer group of MAGA voters, earnest Trump supporters who believed the president’s Big Lie. They came to Washington on his call to, as he put it, “Stop the Steal.” That’s the largest group.

An intermediary group is these armed white power groups who drove a lot of the violence on that day, who came trained and ready for battle and wanted to get other people involved in that battle.

Many in that outer MAGA rank didn’t come intending violence, but seeing the example of other people and responding in the moment, they joined the mob and behaved violently. But the inner circle, which I refer to as the “suited ring,” is Trump and his most loyal supporters. They were trying to get Vice President Pence to essentially contest the election outright and refuse to certify the ballots.

And that ring of the coup included people who were funded by this Koch network of donors and steeped in their ideology. John Eastman [the former dean of Chapman University’s law school and the chairman of the Koch-funded Federalist Society’s Federalism & Separation of Powers practice group] came up with a point by point plan for Trump to block the certification of the electoral votes for Biden and allow Trump to stay in power. (Pence, to his everlasting credit, rejected the scheme, knowing the Constitution did not grant him the power Trump and his coup allies claimed.)

“Koch, by the way, is one of the only big investors in Russia who shows no signs of pulling out at this point.”

Charles Koch doesn’t embrace the Big Lie and has in some ways tried to distance himself from Trump. What do you make of that?

I might be one of the only people to have actually read the whole of Charles Koch’s book, the one that was timed to come out after the election. I think that he expected Trump to win. And I think had COVID not set in, Trump would have won. I think he realized it would be a very ugly election, and it would be good to put out a marker that was not contaminated by the ugliness of the election. But the contents of that book were no different from anything he’s done for years.

It was a different spin, but it was all about nongovernmental voluntary, charity action. It was just kind of silly, quite frankly. But also he did have this one-sentence mea culpa that got a lot of media attention about, “Boy, did we screw up in the political spending.”

Well, guess what, he’s still doing the political spending. [Koch Industries is] still giving to people who are part of the Seditious Caucus [members of Congress who refused to vote to certify the electoral votes for Biden]. Koch, by the way, is also one of the only big investors in Russia who shows no signs of pulling out at this point and is trying to really coast under the radar on that question as well.

What gives you hope about the state of our democracy?

Many voters in the country, the majority, have shown a recognition that we’re in really, really unusual times. And they have broken with tradition in 2018, in the incredible turnout in 2018, which defied historical norms. 2020 same thing…

So, hopefully, if people recognize the seriousness of the situation and go door to door and do all the ground-game work needed to prevail in the 2022 midterms, then maybe we could get some serious democracy reform that would help us going forward. That’s what gives me hope. It’s a very guarded hope, because I just don’t think enough people realize how close to the brink we are.

The Fight to Tax the Super-Rich