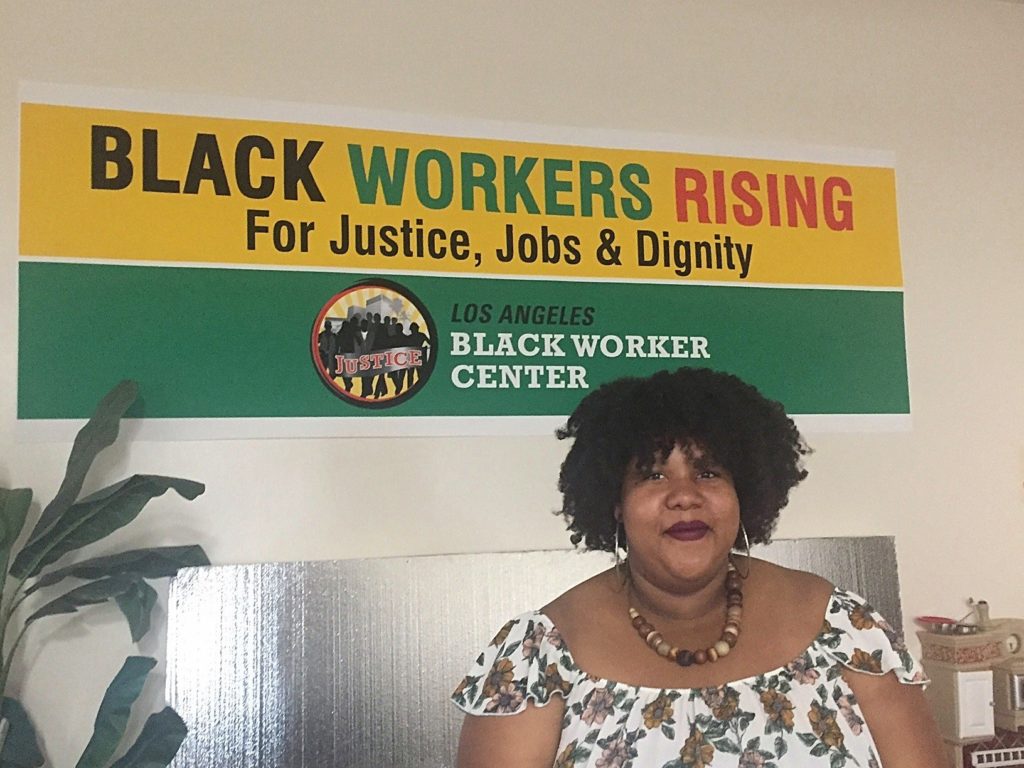 Ricky Wasp was looking for a job when a friend suggested he check out the Los Angeles Black Worker Center (BWC), a seven-year-old organization founded to increase access to quality jobs for African-Americans.

Wasp went to its South Crenshaw Boulevard storefront a little over a year ago. “I came down here in hopes of finding another job,” he said in an interview in the center’s airy offices. “I kind of liked the vibe.” He first got involved as a volunteer. “When it comes to marching, passing out flyers, rallies—I’ll do it.”

The BWC introduced him to the LA City Local Hire program and prepared him to apply. “I got called down to this place on Vermont and filled out the application,” Wasp said, referring to the South Los Angeles Workforce Center. “I was excited. A city job with all the benefits.”

Wasp had worked at a warehouse job for 26 years before being fired in a dispute about paid family leave. He now draws a pension that covers his bills and supplies minimal health insurance that provides for his wife’s medication and care for a chronic condition.

“I need,” he also pointed out, “to go to the dentist. I need new glasses.”

At the city workforce center he applied for positions as a gardener, garage attendant and administrative assistant. Now he’s in a pool of applicants and hopeful he’ll get called for an interview. If hired, he would undergo a six-month probationary vocational training period with full pay and benefits, although a trainee can be fired if supervisors don’t deem the worker to be making the grade. Passing that probation period would make Wasp a full-fledged city employee.

Wasp and BWC are participants in the LA Local Hire program that emerged from a 2015 agreement between the city of Los Angeles, the Coalition of City Unions and Fix LA, an alliance of community organizations.

“Targeted local hire” is an inclusive workforce development strategy for filling 5,000 jobs created by hiring freezes and attrition triggered by the 2008 recession. Los Angeles residents feel the effects of those vacancies as they stumble over cracked sidewalks, swerve around potholes or wait on hold for 911 help.

For example, there are fewer white-gloved Department of Transportation “traffic cops” to wave drivers past on-the-fritz traffic signals. Overall allotted hours were cut in the wake of the recession and 29 positions remain vacant.

Gaps less obvious to civilians still have an impact. A city controller’s audit shows 458 sworn Los Angeles Police Department personnel were filling administrative functions in 2016 that could be done by civilians, freeing up more LAPD officers for police work. And, with some 46 percent of city employees eligible to retire by 2018, more potential vacancies loom.

LA Local Hire is aimed at workers like Wasp, who is both older and African-American. Other targeted-hire groups and individuals include those who live in ZIP codes with high unemployment, the formerly incarcerated, the homeless, veterans and youth who are now on their own after lives spent in the foster system.

The program did a “soft launch” on July 1, meaning that there was no hard push to advertise beyond the 70 participating partner community organizations and agencies that outreach to members and clients, assess work-readiness and guide applicants to one of 17 city workforce centers.

Since the first outreach began in October 2016, the LA Local Hire program has received 1,435 submissions and referred 434 applicants for job selection. The city, meanwhile, has made 69 conditional employment offers, according to its Personnel Department.

The Black Worker Center, where Ricky Wasp went for career guidance, has a long-running employment prep program that puts job-seekers through a five-step process that includes an orientation, the creation of a career plan that identifies the steps necessary to advance, referrals to support organizations, workshops to fine-tune work skills and an evaluation, said De’Andrea Lottier, the group’s project coordinator. 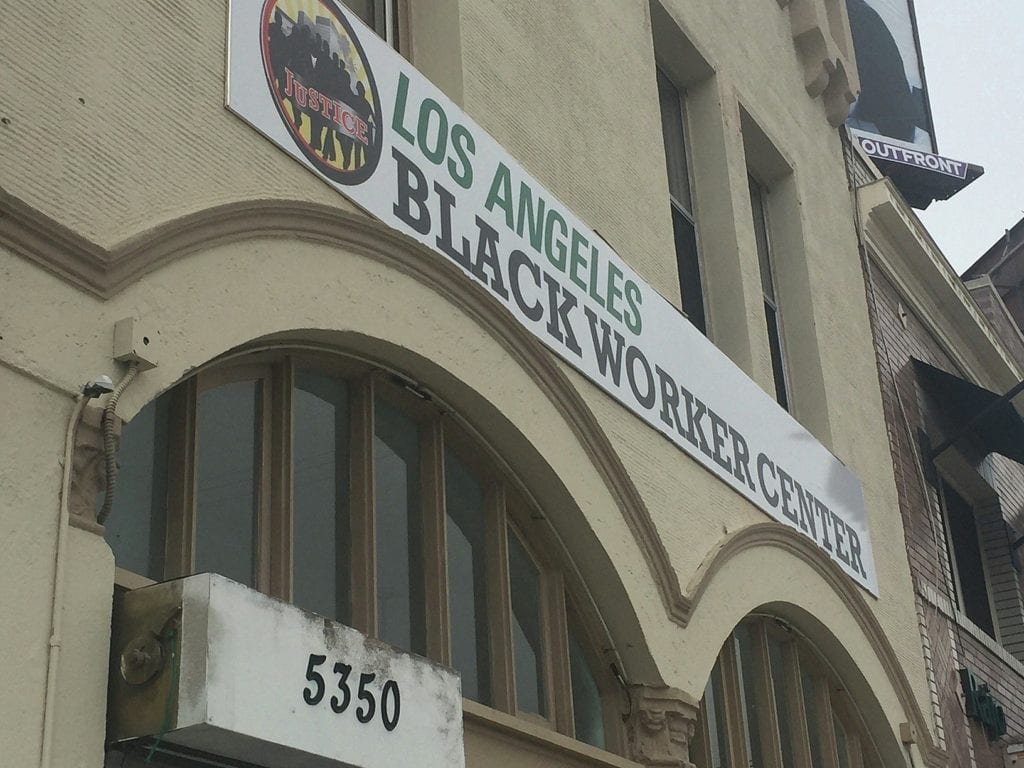 “Through that we’re able to vet folks,” she said. “Are they ready, do they have the skills necessary to apply for a certain opportunity?”

Since February BWC has referred around 50 people to workforce centers, four of whom were called in for interviews, with one person being offered a position.

Three Trade Tech boot camps have prepped participants for city jobs in street repair, tree trimming and waste water operations, said school president Laurence Frank. A former deputy mayor in Antonio Villaraigosa’s administration overseeing workforce development, Frank is a fan of on-the-job training and testing, rather than the more traditional approaches to city hiring. “We start with 100 to 110 participants” from community organizations, he said. “That gets winnowed down.” A cohort of about 40 Trade Tech graduates has applied to the city.

“On-the-job-training or earn-while-you-learn programs are very successful for communities of color, unemployed [and the] underemployed,” said Elsa Barboza, a senior organizer with the national organization Center for Community Change, who developed workforce strategies in Los Angeles during the late 1990s. She’s presently working on job creation approaches with local organizations across the country, and is watching the LA Local Hire progress.

But there have been hiccups in the LA Local Hire program roll-out, as its modest numbers for interviews and hires illustrate.

Mayor Garcetti signed an executive order in April 2016 to reaffirm the 5,000 hiring goal agreed upon in 2015 with the Fix LA and city unions coalition. But Fix LA, the community voice at the table, is critical of the mayor’s pace of implementation, claiming that only 964—19 percent– of the pledged 5,000 jobs have been filled.

Community groups charge that general managers of city departments are dragging their feet in assessing vacancies and implementing the targeted local hire plan. The city’s Personnel Department belongs to the LA Local Hire working group—but other departments are not at the table as part of the process.

In response to a request from Capital & Main, the mayor’s office sent a list of plans that included a head count of potential vacancies.

Press deputy Alex Comisar added in a statement that “we routinely share our progress on City hiring with the public during our meetings, which are held every few months. In addition, this information is contained in City documents that can be obtained by any member of the public.”

But AFSCME’s Teresa Sanchez complains that there’s no central place to obtain the numbers of positions open or refilled.

The city unions coalition backed a Los Angeles City Council measure in May asking city departments to supply information about vacant positions. So far only the Personnel Department has done so. Neither is it clear yet how many positions will be added in the coming fiscal year and how many will be local hire program positions.

But as it rolls out, those engaged on a national level in assessing employment policy are watching LA Local Hire hopefully. “It seems pretty unique in targeting populations that are underserved,” said Marni von Wilpert, associate labor counsel at the Economic Policy Institute, a progressive think tank. “It’s great to see local and municipal governments get involved in creating jobs and providing benefits to the residents that need them most, and who pay taxes into these systems.”

Ricky Wasp is optimistic about his prospects and is committed to the Black Worker Center’s outreach. “After 26 years of working, I forgot what it was like out here for a person who don’t have a job. Whatever I can contribute I’ll do it.”