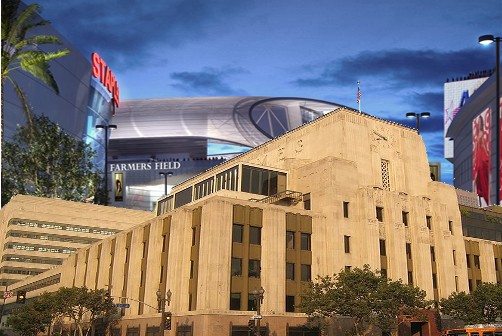 Hector Tobar wrote a nice piece not too long ago in the  L.A. Times. Using the recent approval of Farmer’s Field as a starting point, he looks at the luxury rooms of the Ritz-Carlton and contrasts them with the hardscrabble lives of people at an SRO down the street who earn in a month what people pay for one night at the Ritz. As I said, it’s a nice piece.

Personally, I hate it. It offends me more than the latest screed from Max Boot or the cost of staying at the Ritz. More even than the existence of the Smurfs.

Perhaps that’s a bit harsh, but I can’t understand why someone like Tobar who is smart and cares about equality thinks it’s okay to attack the lousy jobs at the Ritz and Farmer’s Field without talking to at least one worker there. Or their union. Or learning something about wages and benefits at hotels. Or thinking about why those jobs are often low-wage and how to make them better. As lefties who care about poverty, don’t we also have to take seriously the responsibility to address it, not just make easy complaints about fancy hotel rooms?

Tobar’s point is hotel jobs stink, so the city shouldn’t approve bonds for a stadium. And I wonder, couldn’t you write something like, many stadium jobs stink, and therefore we should make damn sure we only approve stadiums where they don’t?

It’s true that many developments are approved on the strength of the many jobs they will allegedly produce with little thought to the quality of those jobs. But it’s also true that the best thing the city can do to change that is make sure there are enough good-paying jobs by supporting developers that do pay workers well.

And, turns out, AEG had hundreds of workers lobbying for them in the council halls precisely because they do more than pretty much any other developer or hospitality-related company to treat workers right. The Ritz and JW Marriott workers are union. So too are the workers at Home Depot and Staples. They make decent wages and they have affordable health care.

In some larger social justice sense, it’s nowhere near enough, but approving Farmer’s Field is actually a way to close the gap between the rich and the poor, and if Hector Tobar and others would simply talk to workers and the unions that represent them, they’d know that.

They’d know this too: Hotel and stadium jobs don’t have to stink. Not all of them do. The poverty wages paid in many hotels are no more natural or permanent than the poverty wages paid in mines and car factories in the 1920s and ‘30s. Those jobs became not just middle class jobs, but jobs that other people now complain pay too much. I long for the day when hotel workers make too much too, and that day comes quicker if we demand it, and if business leaders, as Tim Leiweke and AEG have done, accept that demand and join the call.

Anatomy of a Strike