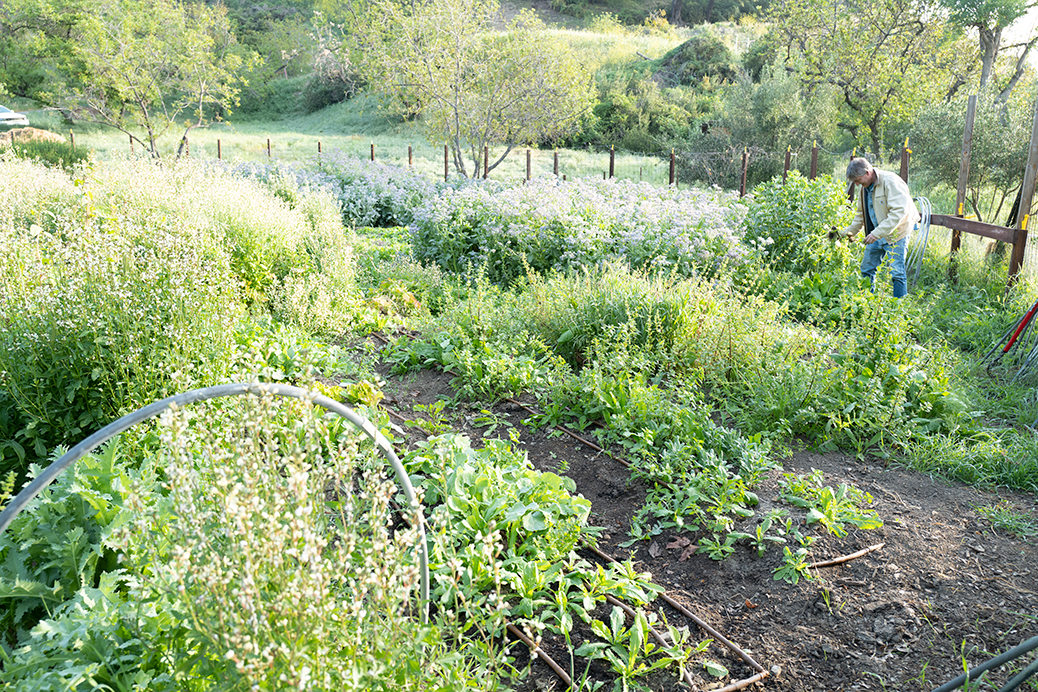 In kitchens all over Los Angeles, we’re riding out this pandemic by asking: What’s to eat? It’s not an easy question anymore. It can take hours to get into a grocery store, and it might still be short on pasta or bacon or flour. This novel coronavirus has shown us that eating together is at the core of our humanity, but empty shelves have also revealed the mad fragility of our industrialized food system. It’s just too big, too centralized, and too easy to disrupt.

The fact that the president has used a wartime law to keep meat-processing plants open, at the risk of worker health and safety, is case in point. The plants are so huge that each one represents a significant percentage of the nation’s meat supply. Distribution problems have dairies in Wisconsin and Ohio pouring millions of gallons of milk into ditches, and California farmers – including friends of mine – plowing finished crops back into the ground.

To break the corporate grip on our food, we need to stop looking to fields far away and look closer to home.

The solution is to diversify and build regional farming, storage, processing and distribution systems. The first step is to shore up our food security with small, local farms. We need community gardens and backyard tomato patches, urban mini-farms and basil on the balcony. To break the corporate grip on our food, we need to stop looking to fields far away and look closer to home.

My wife Lauri Kranz and I run a small urban farm in Glassell Park in Northeast L.A., and when Los Angeles issued the Safer at Home order, our email started blowing up with folks wanting us to deliver boxes of produce to their homes. We looped in the great Southern California specialty farms that anchor the area’s farmers markets, who had suddenly lost an estimated 60 to 70 percent of their business when restaurants halted dine-in service. There wasn’t a solution big enough or local enough to handle the produce these farms needed to sell. But there was one small enough: us.

So Lauri and I started packing boxes, and we weren’t the only ones. Overnight, a new ad hoc food supply system developed as farmers, neighborhood groups, restaurants and activists started moving produce straight from the fields to people who need it.

Our customers are diverse. They share a desire for food grown on healthy soil, without chemical fertilizers, herbicides and pesticides. Some are wealthy people who want to support local farmers growing that food, so they order the boxes as a kind of edible philanthropy. But for others, it is a lifeline at the limits of their budget. Some deliveries are freebies to folks who would never ask.

This temporary, one-box-at-a-time supply system only works because the farmers we’re working with grow diverse crops and grow to a human scale. They don’t plant thousands of acres in one crop that they must sell or dump. Lauri and I are two people, with a hired driver, and we can distribute enough crates to make a real difference to the farms’ bottom line every week. Small farms are no replacement for the volume of the grocery store, but we can feed lots of people, and we could feed even more if the community began to prioritize local food.

We’ve left agriculture to corporate entities, and as they smash their undeliverable eggs by the millions, we’re finding out they won’t feed us.

President Eisenhower’s Secretary of Agriculture Ezra Taft Benson schooled farmers post-WWII to “get big or get out” – small farmers once threw eggs at him in protest – and current Secretary Sonny Perdue parroted this same line last fall. Farm policy for at least a century has encouraged consolidation and surplus production and discouraged small farms. Getting big has created this mess, and getting out has created a crisis of displaced rage in rural America as each successive generation is driven further from the land. We’ve left agriculture to corporate entities that have no connection to farmers, land or community, and as they smash their undeliverable eggs by the millions, we’re finding out they won’t feed us.

Now is the time to implement a more diversified, less toxic and more human-scaled agriculture, and to keep it close to home. Local food production is a key to surviving a pandemic — as well as adapting to climate change and other acts of resiliency. Recognizing this, California passed Assembly Bill 551 (AB551), the Urban Agriculture Incentive Zones Act, in 2013. It gives tax breaks to city landowners growing food on their vacant lots. Los Angeles passed its own version of that law in 2017, but of the thousands of eligible sites identified, only six applications have been approved. Six! Creating programs to install irrigation or deliver city-made compost or organic seedlings would remove some barriers.

The problems of scale and location are only a few of the issues with conventional farming, of course, but this is where we can start. Growing local food is how we take our lives back. Let’s plant our way to food security.