On Sept. 23, California Gov. Gavin Newsom signed an executive order to ban hydrofracturing in the state by 2024. Just three weeks later, on Oct. 16, his administration approved permits to frack six new wells owned by a company with whom he has lobbying ties.

That company, Aera Energy – a joint venture of Shell and ExxonMobil – is represented by the lobbying firm Axiom Advisors. Axiom’s lobbyists include Jason Kinney, a senior advisor to Newsom while he served as lieutenant governor, and Kevin Schmidt, a policy director for Newsom during the same time period. Kinney’s wife, Mary Gonsalves Kinney, Capital & Main previously reported, is also the personal stylist for First Partner Jennifer Siebel Newsom. Jason Kinney has been called a “majordomo” for the governor by Sacramento political press. 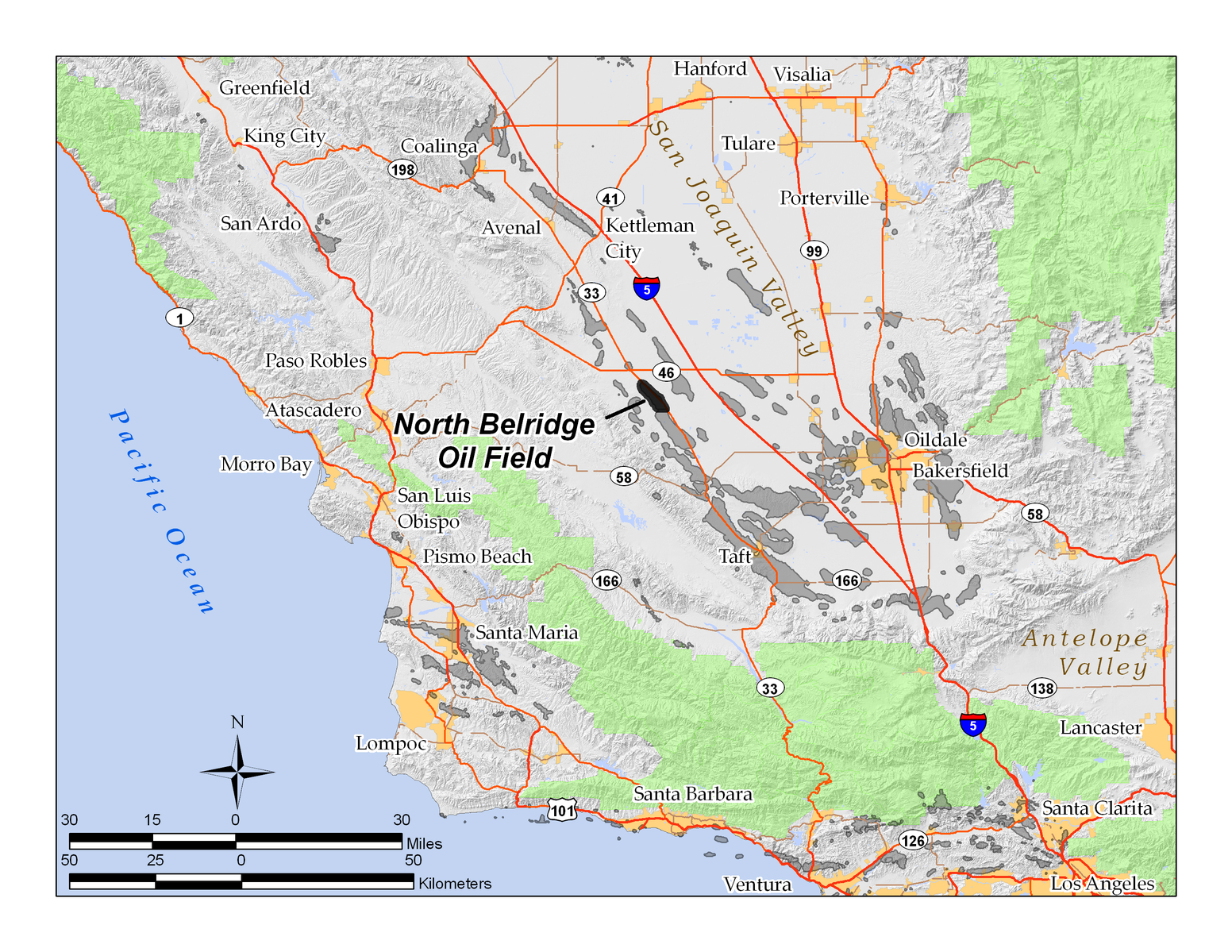 The North Belridge Oil Field in Kern County. Other oil fields are shown in gray. Image by Antandrus.

The permits, granted by the California Geologic Energy Management Division (CalGEM) for wells in Kern County’s Belridge field, came on a Friday just over two weeks before Election Day. The Newsom administration has established a pattern of approving permits during busy moments: CalGEM handed out a dozen on June 1, just days after the police killing of George Floyd in Minneapolis. The administration also issued permits days before the Fourth of July weekend, and immediately after Memorial Day weekend. More were approved in early April, just weeks into the dawn of the COVID-19 era in the U.S.

Press officers for Newsom deferred commenting to the California Department of Conservation, which oversees CalGEM. The agency did not directly answer questions about the permit approvals’ timing.

“The Governor has expressed his commitment to work with the Legislature to change state law to prohibit the practice of hydraulic fracturing by 2024,” said Uduak-Joe Ntuk, State Oil & Gas Supervisor for CalGEM, in a statement emailed to Capital & Main. “For the remaining time that hydraulic fracturing is expressly permitted under state law, CalGEM’s process for reviewing permits for the practice continues to be the strongest in the country.”

Drilling in the Belridge Complex has had severe impacts on local groundwater, according to a study conducted by the U.S. Geological Survey.

The Belridge Producing Complex in Kern County, at roughly 55 square miles, is one of the largest fields in the U.S. The complex has 6,431 wells. Infrared camera video shots taken for a 2015 report by the nonprofit advocacy group Earthworks at the nearby Lost Hills Oil Field, which is part of the complex, showed high levels of methane emissions. Methane emissions, which continue to rise in 2020 according to data collected by the firm Kayrros, is a greenhouse gas 84 times more potent than carbon dioxide during its first 20 years in the atmosphere.

Drilling in the Belridge Complex has also had severe impacts on local groundwater, according to a Sept. 2019 study conducted by the U.S. Geological Survey. Water samples taken for the study showed that irrigation wells in the agribusiness-heavy county contained benzene, ethylbenzene and xylenes. Two water samples showed levels of benzene, which can cause cancer, higher than the legal safety limit for drinking water.

Oil drilling in California has disproportionately negative health impacts on Latino communities and other people of color, according to a 2014 report by the Natural Resources Defense Council. According to U.S. Census data, Kern County’s population is 54.6% Latino.

Despite these impacts, in June 2019, the U.S. Environmental Protection Agency (EPA) exempted certain steam-injected and disposal wells in North Belridge from the Safe Drinking Water Act upon request from CalGEM because “portions of the formations proposed for exemption in the field do not currently serve as sources of drinking water” and “cannot now and will not in the future serve as sources of drinking water.” Since Trump took office in 2017, 18 different oil field sections in Kern County have received such aquifer exemptions, according to the EPA. This came after the Obama administration declared in 2011 that the oil industry had contaminated aquifer territory outside of the exempted zone, opening up a multiyear investigation, one with a Feb. 2017 deadline by which to stop underground injection into nonexempt aquifers.

As that deadline approached, the Western States Petroleum Association (WSPA) and other lobbying groups sued CalGEM, then known as the Division of Oil, Gas and Geothermal Resources (DOGGR). WSPA filed the lawsuit one day before Trump’s inauguration, with Trump’s granting the industry four exemptions in the next three months that followed.

Gov. Newsom has issued over 7,000 new oil drilling permits since taking office in 2019.

Even though the Newsom administration had requested six more exemptions in Kern County since the governor took office, Newsom has continued to position himself as Trump’s environmental adversary. In recent weeks, Newsom has slammed Trump for his climate change denial. In a filmed Sept. 14 meeting, he told Trump that “the science is in and observed evidence is self-evident,” saying “climate change is real and is exacerbating this,” referring to the unprecedented wildfires still burning in California.

Pointing to that data, activists have denounced Newsom’s discrepancy between word and deed.

“He keeps tweeting ‘climate change is real’ but turns around and shows us he values profit over people’s health,” Nalleli Cobo, a college sophomore activist who grew up with oil drilling next door to her childhood home in South Los Angeles and is battling cancer, said in a press release. “Gov. Newsom – stop being a hypocrite and remember you work for us, the people.”

“First he passes the buck to the legislature, then he gives out new permits like gifts to Big Oil,” Siegel said. “By continuing to fast-track more fracking and drilling, Newsom is fanning the flames of the climate emergency.”