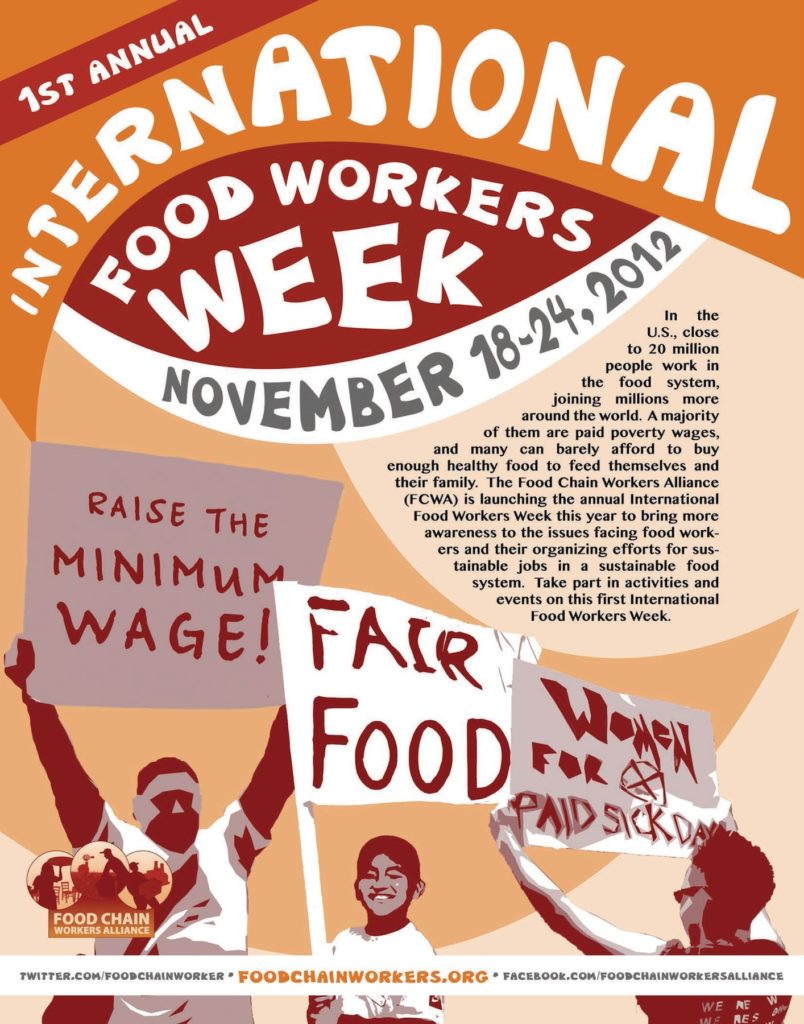 Thanksgiving is a time of year when most people give thanks for their family and their friends, for having a job (if they are lucky to have one) and for many other things in their lives. I am hoping that this year, you also give thanks to the hands that feed us.

The Food Chain Workers Alliance is launching the first annual International Food Workers Week during this Thanksgiving week (November 18-24) to bring more awareness to the hands that feed us – from the Native Americans and African slaves of not so long ago, to the Asian and Latino immigrant farm workers from the middle of the last century, and especially the nearly 20 million people in the U.S. from all races, ethnicities and genders who today ensure that food gets from the farm to our plates.

Yes, you are reading that right. About 20 million people work in America’s food system. That makes it the largest private sector employer in the country. And far too often, many of these workers earn poverty wages, work in unsafe and unhealthy conditions and face discrimination and a lack of opportunities to advance to living wage jobs.

But there are some good jobs in the food system that we should celebrate too! At Swanton Berry Farm outside Santa Cruz, workers are represented by the United Farm Workers – it’s the only unionized organic farm in the U.S. – and also can participate in an employee stock ownership program. Now, Swanton Berry Farm is going through a process to be Food Justice Certified by the Agricultural Justice Project, which has social justice standards for farms and food businesses in terms of how workers are treated, as well as for the farms and food businesses’ relationships with buyers up the supply chain.

You’ll also find good jobs in unionized food processing and distribution companies, grocery stores and food service institutions. For example, in May of this year the members of UNITE HERE Local 1 who work in Chicago’s public school cafeterias won a new contract that not only improves wages and protects health care and job security, it also begins to change the food model in Chicago’s schools by halting any expansion of schools that only reheat frozen food.

We need more of these good jobs. And with your support, workers can organize to win them. Thanks to a suggestion from an ally at the Presbyterian Hunger Program, we put together a “menu,” in English and in Spanish, for International Food Workers Week that gives you ideas of how to learn, reflect and take action. The menu’s Appetizers section lists a number of short videos that you can watch to learn more about food workers. The Main Course provides suggested questions for reflection and discussion. And under Dessert you’ll find numerous options for actions to take online or in person, including:

This Thanksgiving, you can show your thanks to the millions of workers in the U.S. and around the world by celebrating International Food Workers Week with us.

Joann Lo is executive director of the Food Chain Workers Alliance, a national coalition of unions, workers centers and workers’ rights advocacy organizations joined together to improve wages and working conditions, and to work towards a more sustainable food system.