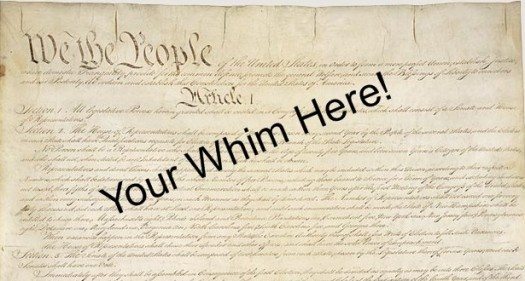 On ABC’s This Week, Newt Gingrich and I debated whether House Republicans should be able to repeal a law — in this case, the Affordable Care Act — by de-funding it. Here’s the essence:

GINGRICH: Under our constitutional system, going all the way back to Magna Carta in 1215, the people’s house is allowed to say to the king we ain’t giving you money.

REICH: Sorry, under our constitutional system you’re not allowed to risk the entire system of government to get your way.

Had we had more time I would have explained to the former Speaker something he surely already knows: The Affordable Care Act was duly enacted by a majority of both houses of Congress, signed into law by the President, and even upheld by the Supreme Court.

The Constitution of the United States does not allow a majority of the House of Representatives to repeal the law of the land by de-funding it (and threatening to close the entire government, or default on the nation’s full faith and credit, if the Senate and the President don’t come around).

If that were permissible, no law on the books would be safe. A majority of the House could get rid of unemployment insurance, federal aid to education, Social Security, Medicare, or any other law they didn’t like merely by deciding not to fund them.

I believe the Affordable Care Act will prove to be enormously popular with the American public once it’s fully implemented — which is exactly why the Republicans are so intent on bulldozing it before then. If they were sincere about their objections, they’d let Americans try it out — and then, if it didn’t work, decide to repeal it.

The constitutional process for repealing a law — such as Congress and President Clinton did with the old Glass-Steagall Act — is for both houses to enact a new bill that repeals the old, which must then be signed by the President. If the President vetoes it, then the repeal can only go into effect if the veto is overridden by two-thirds of the House and the Senate.

The Republicans who are now running the House of Representatives are pushing a dangerous new constitutional doctrine. They must be stopped. There should be no compromising with fanatics.