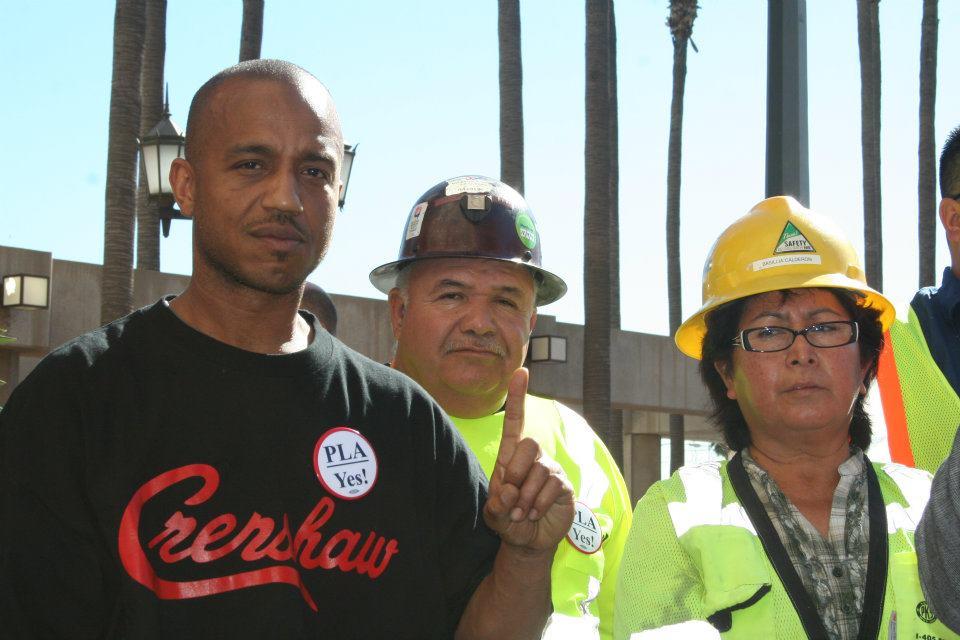 The U.S. Census reported in September that San Francisco and San Jose are the richest cities in the nation and that the poverty rate in California increased for the fifth year in a row, to 16 percent of the population. The Great Recession has been brutal for working people and clearly we aren’t out of the woods yet.

We need jobs. Good jobs. Here. Now. A lot of people in Los Angeles have been working on making that happen, especially around transit, and the efforts are starting to pay off. First, L.A. County voters approved the Measure R half-cent sales tax in 2008 that raises $40 billion for transportation – here, in L.A. County – over 30 years. Then, the Los Angeles Alliance for a New Economy (LAANE) and the L.A.-Orange Counties Building & Construction Trades Council convinced L.A. Metro to take the extra steps to make sure Measure R jobs are good jobs. L.A. Metro agreed to a “Project Labor Agreement” with the Building Trades Council to use skilled crafts workers on Measure R projects. This ensures that the transportation construction jobs will be good jobs.

L.A. Metro is breaking ground with a new “Construction Careers Policy” that will open a door for people traditionally shut out of good construction jobs. Because of this policy 40 percent of the work on Measure R construction must be done by people from low-income communities, the very places where the poverty rate is probably rising the most. Another 10 percent of the work must be done by “disadvantaged workers,” who have a hard time getting work in a good economy and little hope in a bad one.

To qualify as disadvantaged, a worker must select two hardships from a list that would challenge any of us: chronically unemployed, homeless, single parent, veteran of the Iraq or Afghanistan wars, no high school diploma or GED, growing up in foster care, receiving public assistance, a history of involvement with the criminal justice system, an apprentice with less than 15 percent of the hours required to become a journeyman. Pick any two and it feels almost like a recipe for a life in poverty. But Metro’s Construction Careers policy is creating opportunity.

We’re building something important here that can be replicated in other parts of the state and across the U.S. With Measure R we’ve voted to tax ourselves to build the local transit and road improvements we want. With the Project Labor Agreement we’ve guaranteed the jobs will be good jobs employing skilled labor. With the Construction Careers Policy we are creating opportunity for some of our neighbors who are struggling the most, giving them the chance to work at a good job that can lead to a career.

But the Measure R construction program stretches over 30 years and that’s a long time to wait — for the build-out of the transit system and for a job. That’s where Measure J comes in. Measure J, which is on the November ballot, extends the Measure R sales tax 30 more years, providing L.A. Metro with a longer revenue stream to secure the financing it needs to build these projects and provide these jobs now. If Measure J passes in November, L.A. Metro anticipates having seven transit projects and eight highway improvement projects under construction by the end of 2013 and completed within the decade – equating to 250,000 jobs over that time.

Good jobs, here, NOW. Be part of making it happen. Vote on November 6.

Related Topics:Measure J
Up Next