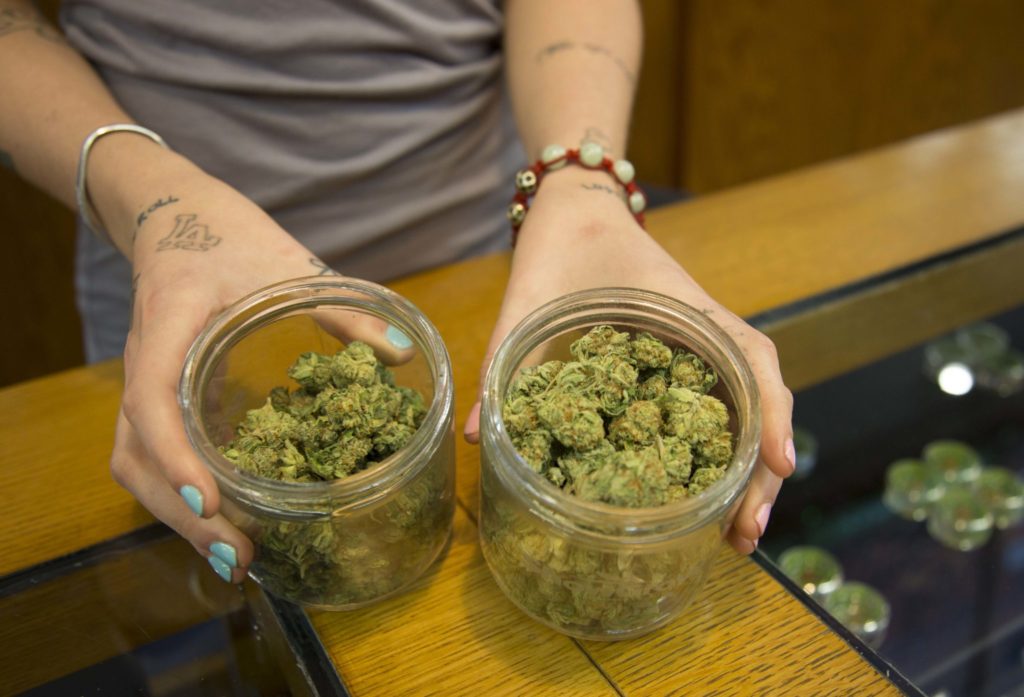 What’s to become of trimmers, the untold thousands of minimally skilled laborers who haunt the new cannabis horizon, is one of this industry’s most compelling issues.

Matilda reclines on a Northeast Los Angeles couch she’s paid $25 to sleep on for one night. The young woman, who earlier in the day had returned to the U.S. from Mexico, talks about her job as a cannabis trimmer. Matilda—not her real name—gives a heads-up on her epilepsy, and through the night she’ll make a number of unusual, loud sounds in her sleep.

Matilda has worked most in Mendocino on trimming jobs good and bad. At most black-market marijuana grow operations, she’s found there are guns. She grew used to the constant, noisy whirr of the high-powered generator that powered the lights growing the plants. The bad gigs are the grows where weapons are numerous and the bosses are stressed out and high.

She left one trimming gig where the volume of open gunplay made her uncomfortable, and moved to another one in the Emerald Triangle–– Northern California‘s Mendocino, Humboldt and Trinity counties –– that featured consistent pay. The farm’s generator operated at lower decibels and the guns were out of sight. Sweet gig. Except for the bathroom, which sat a good 30 yards from the house. Every midnight tinkle run was an adventure.

“You shouldn’t have to worry about bears on the way to the bathroom,” Matilda said.

Briefly, about five years ago, I trimmed for room and board in Oakland and Marin County. My top boss was a retired Russian circus clown who tooled about the Bay Area with a briefcase full of many thousands of dollars and, of course, a heater. While riding with — let’s call him Yuri — it became clear the industry could not function without trimmers, who are generally unseen and often as high as the strain they’re cutting will let them get. What’s to become of these untold thousands of minimally skilled laborers who haunt this new cannabis horizon is one of the industry’s most compelling issues.

The adult-use and medical marijuana markets may collectively think pot magically goes from a plant in the soil to that jarred nugget in your local dispensary display case. But that eye-catching product was prepared by a worker who’s been at the mercy of their employers. Unlike growers, whose value derives from the training and practice necessary to grow pot on a large scale, trimmers are often regarded as disposable. Almost any stoner—or even nonstoner—can do their job. The profile of this work will only become more visible as adult-use marijuana goes mainstream.

A sizable subset of trimmers like Matilda are called “trimmigrants” due to the nomadic nature of their seasonal outdoor labor. Word of workers like Matilda coming together to improve their working conditions has begun getting out, however uncertainly. Matilda herself was unaware of any such movement; however, trimmers are indeed getting organized in a movement that’s as undeniable as it is necessary.

Trimmers are taken less seriously than growers and testers because their labor is viewed as an easily scalable craft that can be completed while thoroughly baked.

California labor law requires that any cannabis licensees with 20 or more employees be prohibited from operating in the state without a labor peace agreement between the business and a union representing cannabis workers. With the peace agreements in place, labor organizers can then recruit workers to join their union without interference from the employer. If the workers join, union negotiators will seek basic workplace protections: freedom from sexual or other harassment, regular pay schedules, incremental wages, just-cause termination and consistent, scheduled breaks.

Down the road, labor contracts hope to include health insurance and other benefits for the folks who trim California’s cannabis, as has happened with the unionized licensees since 2010. Union negotiators want to make sure protections now in place become industry-wide standards, and that all jobs (including trimming) allow a living wage and mobility.

United Food and Commercial Workers (UFCW) Local 770 consultant Robert Chlala said that by organizing trimmers, “My hope —and what we are seeing in our work already—is that we can avoid trimmers being treated as contingent workers or falsely labeled as independent contractors, that they can get the same protections as other workers.” (Disclosure: UFCW is a financial supporter of this website.)

Along with the Teamsters, the UFCW has greeted California’s adult-use cannabis-legalization era with a spate of organizing among trimmers. “From what I have also seen, it’s rarely just one-off,” Chlala said. “Trimmigrants do this work, but many also work in other aspects of the industry, from cultivators to retailers.”

Trimmers are taken less seriously than growers and testers, and even bud tenders and deliverers, because their labor is viewed as an easily scalable craft that can be completed while thoroughly baked.

Before pot ends up in the hands of a distributor and, in the legal marketplace, a lab tester, it is cultivated. After cannabis “colas”–– the flowering site of a female cannabis plant––are grown, dried, and cured, it’s the trimmers’ responsibility to manicure the plant. Leaves, which contain less tetrahydrocannabinol or THC, are cut away, leaving only the cola’s bud. Bad trimming can be aesthetically unpleasant and a waste of time and product. Great trimmers are a business asset.

Their pay can range from $100 to $300 a day. Some in the off-the-books grows, as mentioned earlier, trim as barter. Work days can run as long as 15 hours. The work is inherently repetitive and often done while high and listening to music and, increasingly, podcasts.

However, there’s no single way to summarize the trimmer experience, according to Hezekiah Allen, executive director of the California Growers Association. “A licensed grow and a trespass grow on wilderness land are two different experiences, and the needs are very different,” said Allen. “California’s a very, very diverse marketplace, with a lot of different practices, from best to worst. And it’s very important to avoid generalizations.”

The arrival of industrial-sized pot farms raises concerns that worker treatment will more resemble that found in big agriculture than the kind seen in traditional mom-and-pop pot growing.

Criminal grows are most likely where openly stored guns are found, Allen told me. Small farms that employ family and friends are more the norm, and firearms are not out in the open. These farms, particularly in the Emerald Triangle, are grappling with the California industry’s volatile changes—new regulations and massive companies—and the demands of finding a path to legal status. Allen compares the concerns of these workers to Detroit just before President Obama’s auto company bailout. Simply maintaining jobs is the primary on-site issue.

Big marijuana businesses such as the Oakland-headquartered behemoth Harborside Farms and the average pot cultivator are incorporating these changes differently. Harborside Farms came factory style to ag iconic Salinas, bringing a 360,000-square-foot grow with it. The typical grow is smaller than 5,000 square feet. Flower greenhouses have been largely replaced by cannabis farms. Land costs have skyrocketed as other cannabis operations have streamed into Monterey County. The Harborside Farms effect has raised concerns that worker treatment will more resemble that found in big agriculture than the kind seen in the county’s previous mom-and-pop pot growing.

“That workforce is a lot more interchangeable with the traditional ag workforce,” Allen said, noting that he’s unfamiliar with the specifics of Harborside’s business practices. “You run into a lot of traditional issues. You run into the same safety and wage issues that you do with criminal grows, oddly enough.

At the opposite end from the skeletally policed Emerald Triangle, in a small Los Angeles warehouse, two trimmers luxuriate in just how satisfying the craft can be. While classic rock plays from an old-school radio, Francisco, 44, lovingly prepares a nugget to go out into the world. The cola has just come from the curing room. He and his partner that day were waiting for their boss at the door, eager to work.

“Every time I trim one I’m like… ahh,” he says, clipping at a bud while explaining. “You just make it look the way you like it. Trim it until the little red hairs are showing, until you can see all of the really good crystals. I really enjoy looking at it.”

The two sampled the cannabis and explained to their bosses how the product was working. Two thumbs up. It’s a much more satisfying job than Francisco’s previous work as a landscaper. The closest thing there is to a labor of love that he would do for free.

Yet, the trimmer’s work needs protection and recognition, noted Chlala, who’s also President of Latinos for Cannabis. Southern California, with its vertically integrated cannabis companies—where grows are owned by the same people who sell and move green product—is likely to lead the way in trimmer organizing around the state. Santa Barbara has seen an influx of big pot businesses and is likely to be a big target for unions.

The organized shops could not come soon enough for a workforce too often on the lookout for bears and regarded as an industry stereotype.

“While trimmers are often treated like they do one discrete task,” Chlala said, “their work is key to the production chain for cannabis—no different from any agricultural process like harvesting tomatoes or processing cut flowers or almonds.”

Related Topics:FeaturedmarijuanaUnited Food and Commercial Workers
Up Next