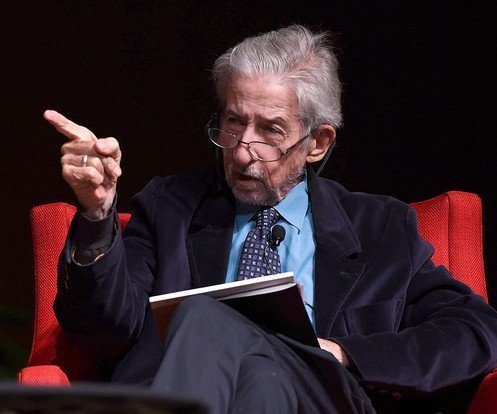 If we appear to seek the unattainable . . . then let it be known that we do so to avoid the unimaginable.
— The Port Huron Statement, 1962

Actress Alfre Woodard teared up as she read from the introduction to Tom Hayden’s 1988 book, Reunion, at the memorial honoring his life held this past Sunday at UCLA:

I hope that the ideals of the sixties, tempered by harsh experience, can have a second coming in our lifetime. That, I believe, is the common wish of those like myself who sought so desperately to change the wider world, who suffered agony amid achievement, and who devoutly wish a wiser consciousness to those who follow.

Hayden died October 23, just a few weeks before the election victory of Donald Trump. Woodard was joined by speakers describing Hayden’s lifelong work on behalf of civil rights, peace, participatory democracy, environmental protections and criminal justice reform. Interspersed video segments provided a timeline of his life, showing him in street demonstrations, speaking at rallies, getting roughed up by police and running for public office. Tom seemed always to be on the move, both intellectually and physically, as a tireless advocate for change. His former wife, actress Jane Fonda, said Tom “could not only see clearly straight ahead but also around corners; he could see what was coming” in American society.

An estimated 1,000 people attended the memorial. Many, like myself, were colleagues of Hayden’s from the battles of the 1960s and ‘70s. Others were inspired by the Port Huron Statement that Tom co-authored with other founding members of Students for a Democratic Society in 1962, or by the organizations he helped generate, such as the Indochina Peace Campaign and the Campaign for Economic Democracy. Still others gained hope and insight from the 22 books he wrote, from his speeches or from the example of the activist life he lived.

But it wasn’t a one-way street for Tom. As his son Troy Garity noted in opening the memorial, “his being was brought to life by movements.”

Indeed, in a 2012 interview with the Activist Video Archive (see below), which was shown at the memorial, Hayden described interviewing Dr. Martin Luther King Jr. as a student activist, adding that King “had a subliminal effect on me… I had to figure out whether I would keep writing about events or put down my notebook and join the picket line.” Hayden said he realized “you could make a difference by throwing yourself into the sea of life….that your life could count for something.”

Hayden was born in 1939 in Detroit, Michigan, and raised in suburban Royal Oak. He was the product of a Midwestern, Catholic upbringing, and it showed. “He had a non-rhetorical way of putting the pieces together,” said Fonda who quoted longtime friend Dick Flacks as saying, “He spoke American.”

In 1971, when the Vietnam War showed no sign of ending, Hayden proposed an Indochina Peace Campaign tour to Middle America with himself and Fonda as speakers, and singer/songwriter Holly Near performing. The tour started at the Ohio State Fair and went on to perform in 100 cities in three months, to individual crowds of over 10,000, with the ultimate goal of influencing members of Congress to end funding to the corrupt South Vietnamese regime. Fonda remarked that we could use such a tour in Middle America today.

Singer Bonnie Raitt and members of the First AME Choir performed at Hayden’s memorial; Father Greg Boyle, United Farm Workers leader Dolores Huerta, actor Ed Bagley Jr., and Bobby Kennedy Jr. all attested to the influence that Hayden had on their lives. But most touching were testimonies of former gang members Alex Sanchez and Dewayne Holmes about Tom helping lift them from the violent life of the streets into self-respect. “He believed in me,” said Sanchez, and “he believed in second chances.” Holmes said Hayden “took me off parole and put me on his district staff…he taught me that I could get more out of giving and doing than receiving.”

State Senate President pro Tem Kevin de Leon described Hayden and his role in the California legislature from 1982 through 2000 as a “constructive disruptor,” and noted he passed into law over one hundred measures during his 18 years in the legislature, 16 of which were under Republican governors. De Leon described spending Hayden’s last Sunday in his hospital room watching the Dodgers beat the Cubs and hailed Tom as a mentor and an inspiration.

Many people at the memorial felt it was a blessing that Tom died before he could see the defeat of Hillary Clinton, who he supported. But Tom was one who knew, as the civil rights hymn explains, that “freedom is a constant struggle.” As Bobby Kennedy Jr. said near the end of the memorial, it’s time to go out now and fight for it.

Tom Steyer Takes the Gloves Off Against Trump: Part 2