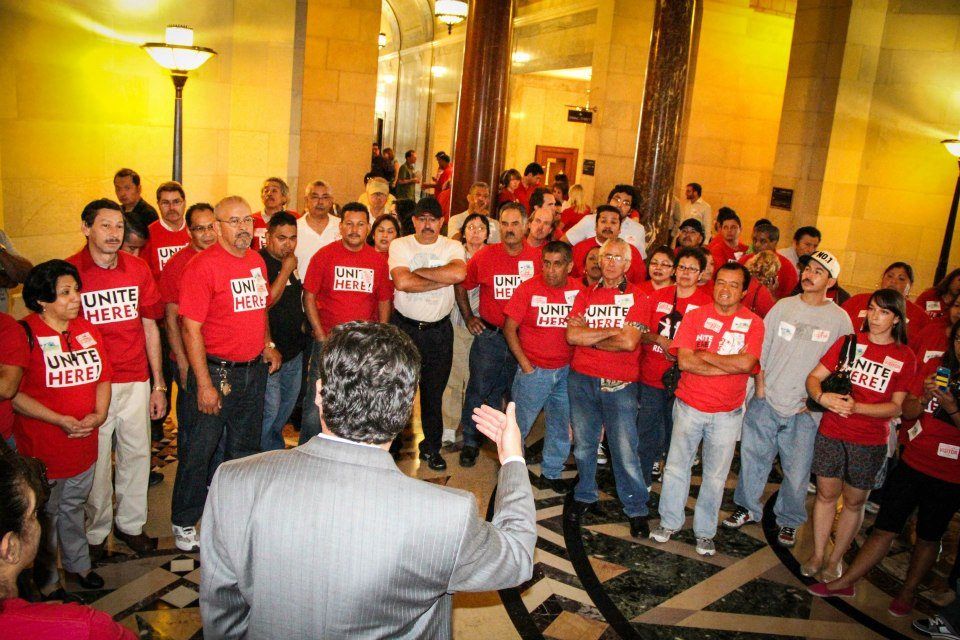 A couple of weeks ago I sat in on a meeting of the leadership of some local hotels. These were not the hotel managers, but the leaders among the workers who clean the rooms, clear the tables, chop the vegetables in the kitchen, vacuum the rugs in the lobby and perform all the other back-breaking tasks that make a hotel comfortable for guests.These people – all from hotels with union contracts – face tough negotiations going into the fall and their workplaces could face serious competition from several proposed downtown hotel projects.

Nearly all these men and women, many of whom arrived wearing the uniforms of their hotels, spoke Spanish. This put me at a serious disadvantage because despite my efforts to learn this beautiful language, I can’t seem to speak it and I can hardly understand the rapid sentences thrown back and forth between people who all know one another and have worked together for years. Fortunately, one of my clergy colleagues was there to translate for me so I could understand what people said.

The facilitator asked everyone in the room to introduce themselves — their name, their hotel, and to say briefly what meant the most to them about their union contract. Most of us would expect wages to be the central issue. After all, that is what gets played in the business pages, and it is the issue most often talked about in labor-friendly blogs. But that’s not what these people said.

Overwhelmingly, they said “health care.” One after another these hard-working people said that the union contract clause that was most important to them was the one about health insurance for themselves and their families. Probably two-thirds of the people in the room talked about health insurance, often beginning their comments with, “When I was hurt…” or, “When my child was sick…”

Well, that makes sense, I thought. That’s why national health care matters so much.

Next came a real surprise – respect. These workers said that because they belonged to a union, for the first time they had the ability to oppose unreasonable demands by managers without risking their jobs, and to ask for help on especially heavy work days. One woman described “heavy check-out days” – times when a convention ends or a tour group leaves the hotel and there are too many very dirty rooms to clean. On those days, now, she can talk to the manager, who checks the situation and who can re-assign others to provide extra help in cleaning her allotment of rooms.

“Before,” she said, “we couldn’t ask for help, we couldn’t stand up for ourselves.”

Seniority was the third benefit from their union contract that mattered most. Now when I think of seniority I think of the perks of age, longevity or increased wages. For these employees seniority means they cannot be summarily fired when hurt on the job. Seniority means negotiating with a supervisor for a reduced work load while recovering from an injury. Seniority means not facing employer sanctions alone and without defense. Since most hotel worker injuries are back- and muscle-related, these accommodations matter.

As I sat listening to these people say what issues mean the most to them, the awareness that 60 percent of the jobs created in the last four years in this country are low-wage jobs rubbed like sandpaper through my mind. These jobs range from $7.69 to $13.83 an hour – from barely minimum wage in most places to barely a living wage. Now, a third of working people consider themselves “lower class,” up from a quarter just four years ago. Only a union contract can bring health care, respect and seniority to a work place. Minimum wage laws don’t touch upon those benefits – which, as I learned sitting in that room full of worker-leaders, are exactly what matter most to low-wage employees.