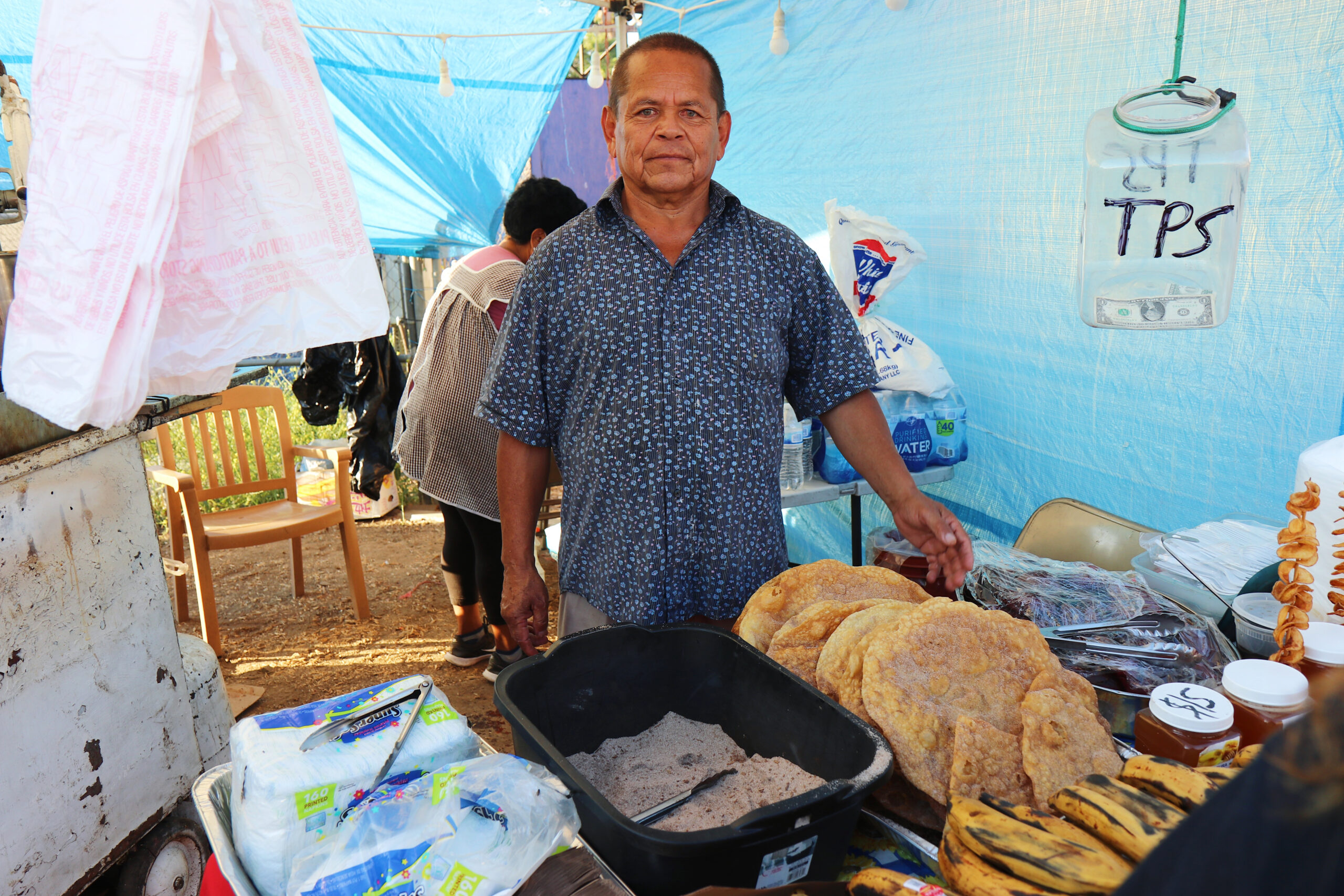 “I was shot right over there,” says Jose Luis Millán, pointing north toward Alameda Street.

On a blinding summer Sunday, the elotero (corn vendor) is back in Watts. Pushing his cart along his old route from the Imperial Courts housing projects on Mona Boulevard and East 115th St. through the streets just east of the complex. The heat from the black asphalt is palpable.

This story was produced in partnership with L.A. TACO

Millán, 34, is talking to an old customer on the corner of East 113th St. and Mona Boulevard, one of a handful who have exited their houses to greet him at the sound of his horn, asking where he’s been. One brings him a bag full of freshly washed fruit from his yard.

“No lo he visto,” one customer tells Millán. “I haven’t seen you.”

“I’ve been moving, that’s why,” answers Millán as he covers the elote, sweet corn on a stick, with cotija cheese and chile en polvo. It’s the same chili powder he threw in his assailant’s face last year in an attempt to protect himself before he was shot in the stomach. Jose Luis Millán drenches sweet walnut syrup over shaved ice. The raspado de nuez is one of his most popular flavors.

In the evening of April 30, 2021, Millán was shot on Alameda Street, blocks north of where he stands, in an attempted robbery. After trying to find somewhere else to sell, money issues have forced him back to Imperial Courts.

He is one of many street food vendors in Los Angeles who must run his business while battling mental health issues. In interviews with more than 20 street vendors from across Los Angeles County conducted by L.A. TACO and Capital & Main this summer, vendors described the traumas of the iconic profession that push them to the breaking point.

In an Aug. 3 forum on street vending and mental health organized by L.A. TACO and Capital & Main, vendors said they must navigate among a range of hostile forces to make their income: cops, sheriffs and government inspectors who issue fines and confiscate food and equipment; councilmembers who shut down street vending markets; robbers who attack vendors with guns, acid and knives; and racists who torment vendors with verbal and physical abuse.

“The other day they beat up a vendor in Palmdale because he was selling in someone else’s ‘territory’.”

Vendors talked about the relentless double threats of attack and criminalization, Ramirez says, and visibly tensed when discussing particular streets or intersections where they had encountered police or robbers.

“We have a community that is in chronic stress and in chronic trauma,” she says. “Their bodies don’t know they’re no longer in danger, and for some of them they’re still in danger.”

Since he was attacked, Millán has tried, unsuccessfully, to leave his old territory behind.

“I moved to Palmdale because of what happened,” he tells his customers. They reply: “Cuidese, take care of yourself.”

“How am I gonna leave my best customers?” Millán chuckles.

Millán has struggled to find a route that will guarantee a stable income in Palmdale. On weekends, he drives two hours back to Watts, where in a day he makes his weekly Palmdale  income.

“I moved thinking I was going to find something better,” he says. “I’m stressed out because I don’t know how I am going to pay rent. I don’t sell as much as I do in Watts, and the other day they beat up a vendor in Palmdale because he was selling in someone else’s ‘territory.’”

Millán explains that some vendors get very territorial about their routes.

“I’m more frustrated than scared si soy sincero, if I’m honest,” he continues. “I just want to be able to take care of my family. It’s always one thing after another, but I can’t give up.” 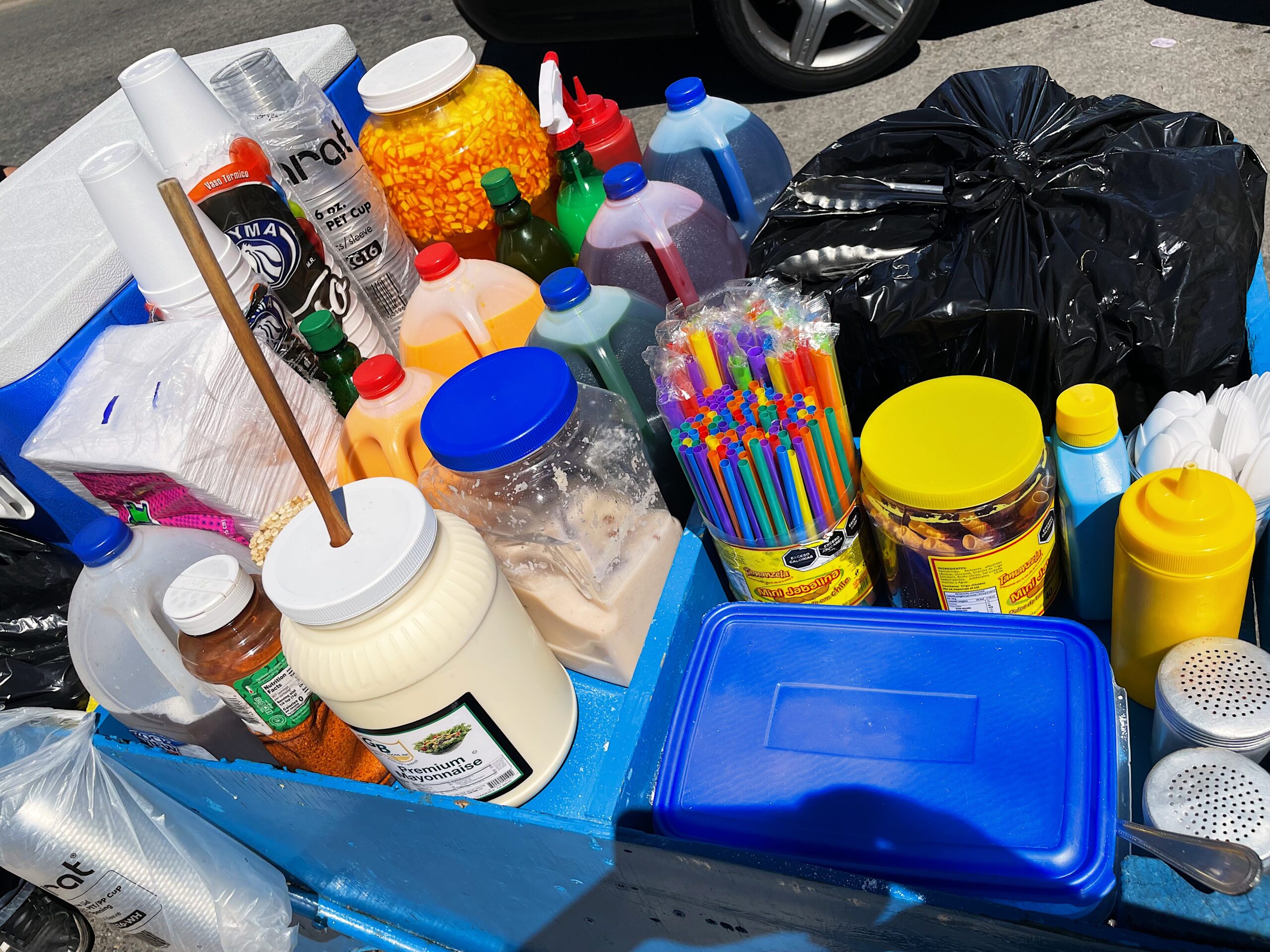 A moveable feast: Syrups, fruits and bright flavorings are the taste of Millán’s trade.

Finding his products in Palmdale has proven difficult as well. He still has to take the long drive to Watts to purchase corn, flavored syrups and ice, spending around $1,200 a week on supplies. In Watts, his biggest selling item is the elote, but in Palmdale, where temperatures are higher and the houses are so spread out, he swaps his pushcart for a bicycle, and the raspado, shaved ice, outsells the elote. Both cost $3, recently bumped up for inflation.

“I try and keep it affordable because I know the community I am serving, not everyone has money,” he says as he makes a mangonada, drowning scoops of shaved ice with mango chunks and syrup. “I don’t always make back what I spend.”

That’s how Millán was forced back to Watts, where he rolls his cart over pavement once stained with his blood.

After he was shot, Millán received a limited number of therapy sessions over the phone, from a service to which he said law enforcement directed him. “I took a few and was told if I start feeling like I did after the attack, I can still call to take the remainder of my therapy sessions,” he says.

Most vendors, however, cannot access mental health care in L.A. County. Financial barriers and immigration status are among the issues that tend to get in the way for many seeking help, says Carolina Valle of the California Pan-Ethnic Health Network. Not to mention a general stigma that still pervades Latino communities that marks people who seek help for their mental health as weak.

Expansions to Medi-Cal and mental health resources have grown over the years. In 2016 coverage was made available to immigrant children. In 2020 coverage was extended to young adults ages 19 to 25, and this year to elders 50 and over. California is expanding Medi-Cal (and its accompanying mental health coverage) to all undocumented immigrants by 2024.

However, before these expansions were made, Valle says there was no mental health safety net for people who were undocumented.

“Only until you are in crisis will you get services by the county,” she says.

Racial disparities along with lack of outreach are also obstacles faced by communities like street vendors who are predominantly Hispanic. SB 1019, legislation introduced this year by state Sen. Lena Gonzalez, seeks to strengthen state mental health outreach to diverse communities, immigrants and people of color.

Ignacio Torres Rodriguez has his back to the wall. It’s the only way he can sell the churros he’s been vending for 12 years without growing panicked.

On Aug. 18, 2021, Torres Rodriguez was stabbed five times in a random attack in Boyle Heights. Now he doesn’t trust anyone, he says, and can’t sell with his back exposed.

He found security at the Pico Rivera Sports Arena, the new location of the Avenue 26 Family Night Market, a street vending hub that used to be in Lincoln Heights until it was abruptly closed last year. Now 16 miles east of its original location, the market functions as a safe haven for displaced vendors from the Avenue 26 Market and the Patata Street market in Cudahy, shuttered in June of 2021, as well as for standalone vendors who have been victims of attacks.

“It’s just not safe for me to sell in the streets anymore because neither the police nor the city let us work in peace,” says Torres Rodriguez. “They are always after us, throwing our things away, and on top of that I also would have to look out for my safety.”

Street vending was ostensibly decriminalized in California in 2018, but food vendors have been largely unable to acquire permits because of burdensome requirements in the California Retail Food Code. Meanwhile, criminalization has continued in Los Angeles, particularly after the pandemic, when the City Council cited COVID concerns in vending crackdowns.

“Like any other job, we need a stable location. But we can’t have that unless we have permits, and they make it too difficult for us to get one.”

In August, the California State Assembly passed SB 972, which would redesign the Retail Food Code to ease permitting for street vendors. While permits remain expensive for vendors in many cities, the law could bring the industry out of the shadows. It now travels to Gov. Newsom’s desk.

Torres Rodriguez moved through four different locations last year before his stabbing but was chased out of each by law enforcement before street vendor advocate Edin Enamorado secured him a space outside the Sports Arena.

“I sometimes have random flashbacks play in my head about the attack, and when that happens, I feel heat running down my body like I did that day,” says Torres Rodriguez. “Like any other job, we need a stable location. But we can’t have that unless we have permits, and they make it too difficult for us to get one.”

When the L.A County Department of Public Health (DPH) inspects unpermitted vendors, sometimes with the Los Angeles County Sheriff’s Department or city police departments in tow, it often confiscates vendors’ food and equipment. During an enforcement spike in May and June of 2021, DPH confiscated the food of at least 35 different vendors, according to vending inspection forms obtained in a record request by Capital & Main. (One community hit hard during this time was the Guatemalan Night Market on Sixth Street and Bonnie Brae, where in June of 2021, DPH  threw away vendors’ products.)

Inspectors of mobile food vendors for the Los Angeles Bureau of Street Services carry “less than lethal” firearms, the department said. They issue tickets to vendors that start at $250 and rise to $1,000. The bureau says it has issued more than 2,300 tickets to unlicensed vendors of food and merchandise since Jan. 1, 2021. 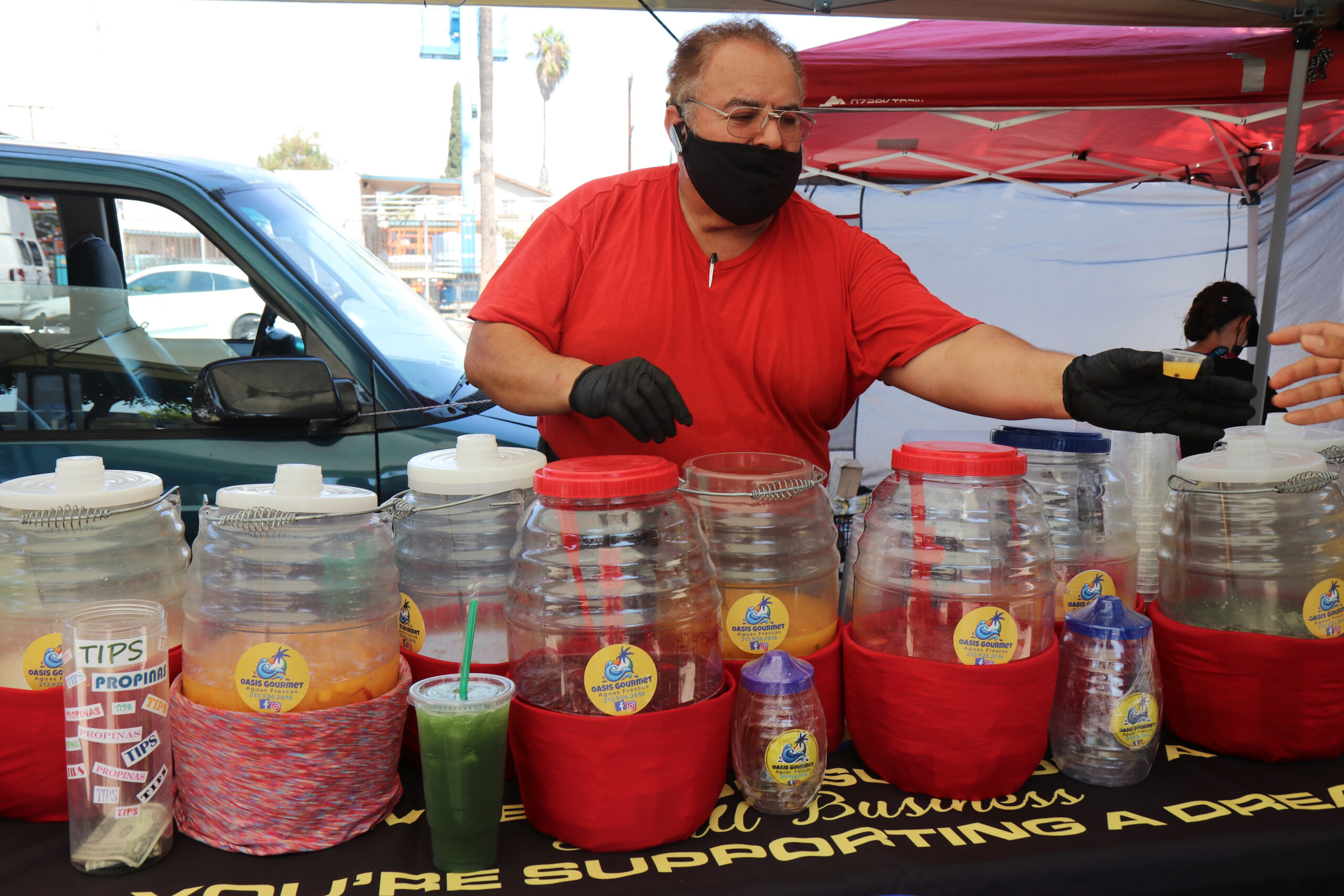 Cesar Benitez offers samples to those passing by, free shots of cucumber, melon and watermelon-flavored aguas.

In the Aug. 3 forum hosted by Capital & Main and L.A. TACO, Cesar Benitez shared his fear of enforcement agencies with other vendors and representatives from local political offices.

“It fills me with helplessness when I see them throw my products away,” he said, choking back tears. Benitez sells aguas frescas, water infused with fruits, offering 40 different flavors in the working-class suburb of Commerce. Benitez described four instances in which the health department, along with law enforcement, have thrown away his products.

“The fear robs me of sleep. Sometimes when you are able to finally sleep, you just want to continue sleeping forever, and think that what you went through was just a nightmare. But then you come back to reality.”

Across the market at the Pico Rivera Sports Arena, a carnitas vendor displaced from the Avenue 26 market says the closure of the hub sent him into weeks of panic.

“I started drinking again,” he says. “We didn’t know where we were going to end up. Everyone was worried because most of us are full time vendors. Over 50 of us were moving from city to city, and kept getting kicked out before ending up here.”

“I love my job,” says Jose Luis Millán. “It’s like my own company, my own business, and my favorite part is talking with everyone in the community, serving them.

“Things will always happen and we’ll keep working. That’s just how you have to be, even when it’s hard.”

All photos by Janette Villafana.